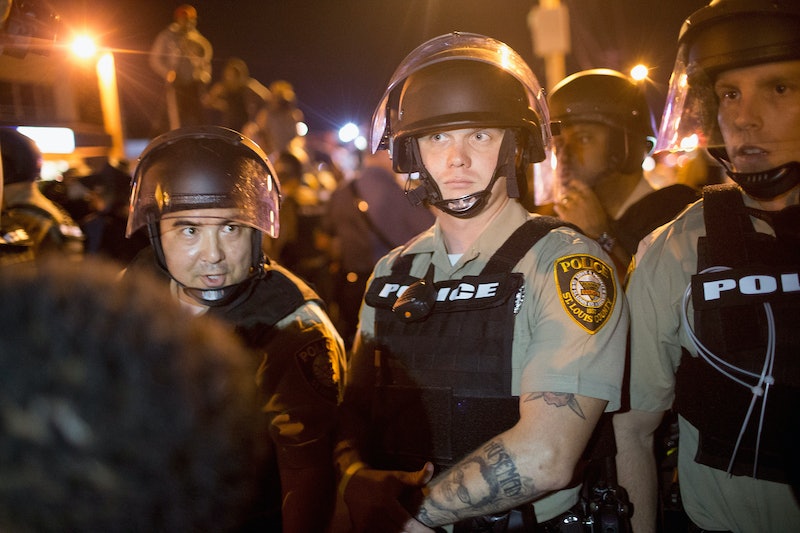 I don't know if the Ferguson Police Department is trying to be the most tone-deaf group of officers in America right now, but they're certainly doing a good job regardless. The antics are getting so bad that on Friday, the Justice Department had to intervene in the small St. Louis town in order tell Ferguson Police to stop wearing “I am Darren Wilson” bracelets — you know, Officer Darren Wilson being the cop who fatally shot Michael Brown, the unarmed teenager whose death sparked a national debate about racism and police brutality. The letter, sent to Chief Thomas Jackson on Friday, came in response to complaints about certain officers wearing the ridiculously offensive bracelets as recently as this Tuesday. And not off-duty, either — the officers were wearing them while manning protests. Residents reportedly told a Justice Department member about the incident during a community meeting earlier this week; photos of the bracelets — dark blue, with “I am Darren Wilson” in clear white letters — have been increasingly circulating on social media over the last few days. In the letter, Christy Lopez, the Justice Department’s deputy chief of civil rights, scolds the police force for agitating the already tense situation in the town (ya think?). Although she writes that they are "aware of the importance of individual expression of opinions" and that they "acknowledge that the message that many officers intend to convey by wearing these bracelets may be different than the message received by many of those who see these bracelets," she adds:

Nonetheless,there is no question that police departments can and should closely regulate officers' professional appearance and behavior, particularly where, as here, the expressive accessory itself is exacerbating an already tense atmosphere between law enforcement and residents in Ferguson. These bracelets reinforce the very "us versus them" mentality that many residents of Ferguson believe exists.

Adding to the dumbfounding tastelessness of the situation, the police officers wearing the bracelets weren't even do so in the open. That is, they'd put black tape over their name-tags in order to avoid being identified. Lopez mentioned this in another letter she'd written earlier in the week to Chief Jackson, saying:

Allowing officers to remain anonymous when they interact with the public contributes to mistrust and undermines accountability. The failure to wear name plates conveys a message to community members that, through anonymity, officers may seek to act with impunity.

This debacle comes less than a week ThinkProgress outed the St. Louis Police Department’s Michael Brown seminar (which, if you were wondering, was an "entertaining" training meeting on how to "win the media!"), and only a couple of days after Jackson himself tried to join a protest and ended up inciting more violence.

While its good that the Justice Department has gotten involved — and that the bracelet-wearing has now thankfully ceased (or at least, let's hope so) — it's mind-blowing that this is what it's taken, just to maintain a sense of common decency in the broken town.