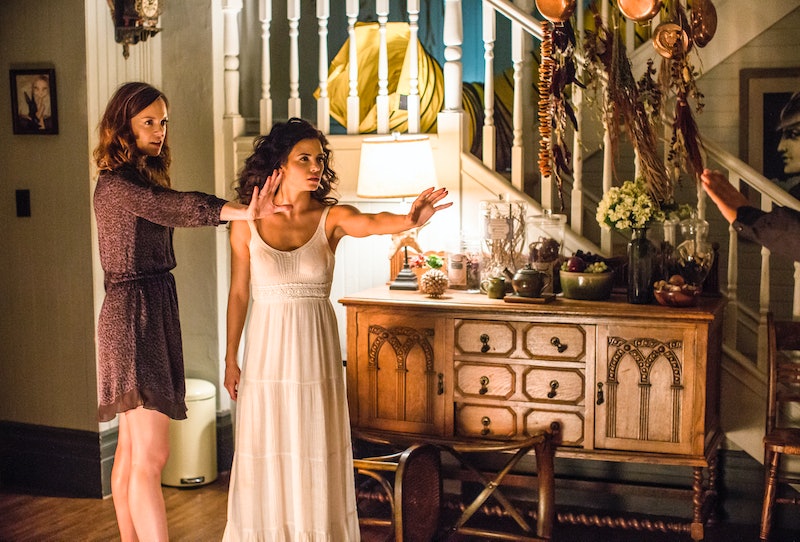 This season on Witches of East End has shown us a lot of death, just to take it all back again. And while I'm happy to see the leading ladies survive, I'd like some permanent drama to really shake up the show. With the two-hour Season 2 finale of Witches of East End airing on Oct. 5, will the Beauchamps' dangerous gameplan(s) to get rid of the king once and for all actually succeed? And more interestingly, will we see any of the witches end up in Asgard? I was mad at Ingrid for being naive and siding with her grandfather King Nikolaus in "The Fall of the House of Beauchamp," but it turns out, she is actually a master plotter too. She's earned the trust of her evil grandfather by telling him she wants to go to Asgard with him, all in an effort to destroy him (go, Ingrid!). I want her plan to work, but it would be fascinating if she actually ended up in the magical land.

In "Poe Way Out," Joanna, Wendy, and Freya went back in time to Baltimore so that Joanna could procure what she needed from the past in order to defeat her father in the present. Now that Joanna has what she needs, coupled with the fact that Ingrid is doing her own covert operation, there's a real possibility that the powerful Nikolaus could be destroyed. But, things aren't usually that simple on Witches of East End. With the return of Tarkoff on the scene, and not to mention Freddie doing god knows what, the plan is bound to get complicated.

Ingrid went to Dash with her plan, but I'm going to assume he's going to be a bit tied up with his FBI agent friend with benefits, who is investigating the murder he committed. And Freya may get sidetracked by the fact that Killian still thinks she is dead and took a potion to kill himself. But based on promo photos for the Season 2 finale, we know for certain that the Beauchamp women will join forces against the king.

In the photo it looks like the king has taken the form of Tommy again (will the real Tommy be able to survive all this? It wouldn't be too devastating if he died) and that Wendy is in a perilous situation. Since the king noted that Wendy only has one life left, he could be trying to kill her (say it isn't so!), or maybe he's using her as bait to get the others to go to Asgard with him. Is that really what the king wants?

I'd love to see the women kill the king — but after hundreds of years, could it really happen? Plus, we'll need a villain if there's going to be a Season 3. I think it would be more entertaining if we saw the modern day Beauchamp women transported to Asgard. It seems only fitting that they'd defeat the king on their home turf.