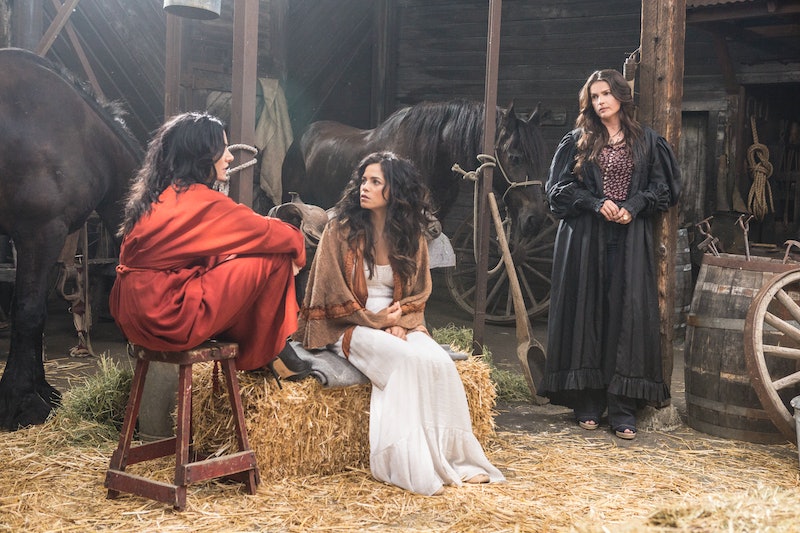 The nerd in me rejoiced extra hard at the end of the Sept. 21 episode of Witches of East End . Time doors and time travel? Yes, please! At the end of the "The Fall of the House of Beauchamp," Joanna pulled Wendy and Freya (oh, right — as predicted, Freya and Ingrid are alive now) through the time door into — well, they didn't exactly say where. But based on the setting, the fact that the Sept. 28 episode is entitled "Poe Way Out," and that the show's executive producer Maggie Friedman said, "We may meet Edgar Allan Poe" at the San Diego Comic-Con 2014 back in July, it's safe to say they'll most likely be in the 1830s-1840s. How exciting! The Beauchamp women are going to bro with Poe.

Yeah, yeah, yeah. "The Fall of the House of Beauchamp" kind of crapped out on all of the deaths they had given us in "Smells Like King Spirit." Which is lame, but came as almost no surprise. Although, did they really need to bring back Eva? I realize it's actually her great-granddaughter, but since she looks identical (AKA the same actress — Bianca Lawson), won't that just be a baby bit confusing for Killian? I need him focusing on Freya right now (who he doesn't even know is alive again — ugh), not going on adventures with a whole other set of characters.

But let's get back to the time travel. Frederick seemed genuinely convinced that the King is good now since he brought Ingrid and Freya back to life, but Joanna (and I) didn’t buy it. She grabbed the women of her family and told them it was time to use the time door. She had to go to the past to get something her younger self had in order to complete some time loop and presumably help her defeat her father. To her mother's chagrin, Ingrid chose to stay back with Frederick and King Nikolaus, but Wendy and Freya took a (not particularly great CGI) walk into the past.

Since the girls don't remember their past lives, Freya had no idea where they ended up, but Wendy said she had been to this past location before. And based on some promo photos of the episode, it looks like we'll be getting flashbacks of Freya and Killian from the 1800s, which makes me oh, so happy.

Killian is looking not as attractive as he normally does with that creepy moustache. But since Killian is always a different person in the past, could he actually be Edgar Allan Poe? As seen in the video below, actor Daniel DiTomasso does have an eerily, strange resemblance to him (more so than John Cusack did in The Raven).

Eh? Eh? Plus, in the photo, he's got books, booze, and writing implements. Everything you need to be a famous writer!

Poe lived in many cities along the east coast (including Richmond and Philadelphia), so the Beauchamps could be in a number of locations. But as the Biography video said, he was traveling to New York when he disappeared for close to a week until he was found drunk in Baltimore. He died only a few days later. Killian and Freya's relationships are always fraught with despair, so it wouldn't be a stretch if Killian was Poe. (The feasible counterargument could be that the moustache was just a part of the times — but I'm not buying it.)

It also seems like there may be more darkness in 1840s Freya than incurrent-day Freya, based another photo from the episode.

Is Freya torturing an innocent woman in this photo? I'm assuming this is the past Freya and not current Freya, since I can't imagine the one we've grown to love treating someone like that. If that's the case, no wonder Joanna was so devastated at losing the 21st century versions of her daughters. She did say they changed in every incarnation, so maybe Ingrid and Freya were not always as kind and generous as they are now.

Either way, "Poe Way Out," looks to be an exciting — and enlightening — episode of Witches of East End, especially for us history dorks out there.