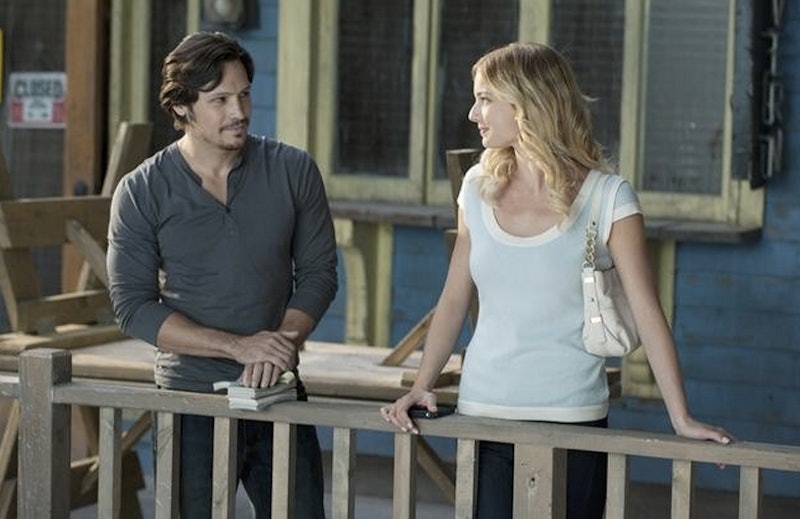 The premiere episode of ABC's Revenge was a doozy. Emily took over the Grayson's house, Jack was a cop, Victoria escaped from the hospital, so much happened. And I couldn't help but feel that now that Aiden is dead, and Daniel is off doing something, is this the season that Jack and Emily are going to become a couple? It has been teased from the very first episode of the show that these two are just waiting to happen, but prior to Season 4 , Revenge creators kept Emily and Jack on a tough and tragic journey — in fact, their journeys have been quite tragic. But with all that buildup and the romantic waters being clear for Emily this season, is this finally the season of Emily and Jack? Perhaps. But I'm not so sure it should be.

Nick Wechsler, who plays Jack on Revenge, spoke to E! and teased a possible "moment" between Emily and Jack in Season 4. He also mentions in the interview that Jack's new police partner Ben has his eye on Emily, which leads Jack to get a little jealous. Uh oh. So it seems very possible that at some point this season "Jemily" is going to happen finally, right? Well, I don't think it should and here are four very solid reasons why.

It's a classic television downfall. Once a couple that fans have wanted to get together for a long time actually do get together, boring-ness ensues. People love the idea of Emily and Jack, but if they get together, what will there be to hope for?

He Could Be In Danger

Residents of The Hamptons drop like flies on Revenge, and usually those closest to Emily are at major risk — how Nolan has survived this long is beyond me. Emily's enemy, Victoria, is ruthless and killed Emily's love-of-her-life Aiden last season. It would be terrible to see Jack find the same fate.

Are They Meant To Be?

I'm not so sure these two are meant to be, like their childhood friendship leads on. They were cute back then, sure, but it seems too easy to have them end up together at the end, especially after everything they'd been through. A relationship could complicate the friendship — and also familial relationship — the two have built since Emily's return to town.

I know, Daniel shot Emily, she used him, yada yada yada. But they are so perfect together... Is it absolutely crazy I haven't given up hope on Daniel and Emily? Maybe. Then again, on this show, anything is possible.