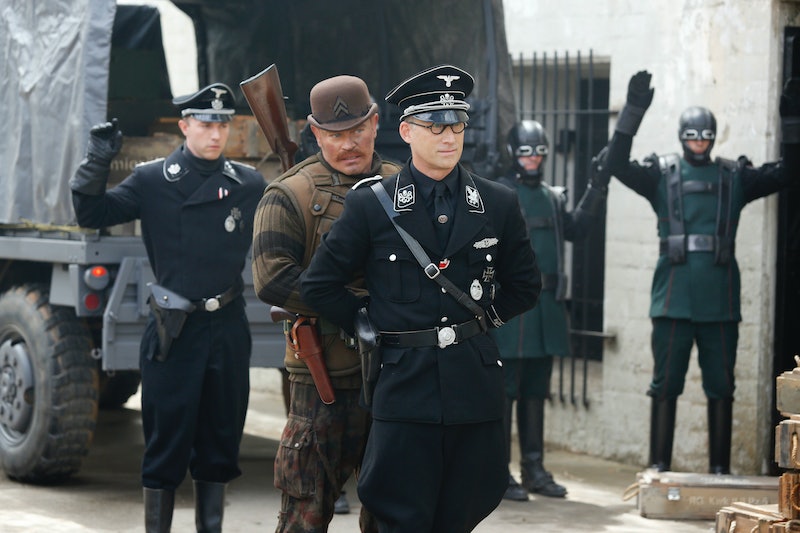 In the opening moments of Season 2 of Marvel's Agents Of S.H.I.E.L.D. , viewers were introduced to the ABC show's new Big Bad. The scene was a flashback to 1945 and the end of World War II, featuring Hayley Atwell's Agent Peggy Carter and the Howling Commandos. They infiltrated a stronghold where Hydra men were packing away precious alien cargo: the original 0-8-4 (which is also confusingly referred to as the Obelisk, despite its decidedly non-obelisk shape). The Nazi in charge was named Daniel Whitehall, and we saw him once again at the end of the episode. He was the man who had ordered Carl Creel (a.k.a. The Absorbing Man) to steal the Obelisk from S.H.I.E.L.D., resulting in the death of Lucy Lawless' Agent Isabelle Hartley. And, despite the fact that last we saw Whitehall he was being taken into custody almost 70 years ago, he was very much free and very much un-aged. So who is Daniel Whitehall, the mysterious, apparently immortal Nazi?

Unlike Lawless' doomed agent, an original creation for the show, Whitehall (played on the show by Reed Diamond) is ripped directly from the pages of Marvel Comics. First introduced in a 2009 issue called "Secret Warriors," Whitehall is an enigmatic Hydra agent who, interestingly enough, fulfills a similar role in the comics as Raina does on the show: he finds gifted people and helps them realize their full potential. Some of his most famous subjects include Ophelia Sarkissian (aka Viper), Tomi Shishido (aka Gorgon), and the young recruit who became The Hive.

On the page, Whitehall has an alter-ego which hasn't been named yet on the show: Kraken. He got his supervillain name because he often sports a horned helmet of unknown alien origin that magically covers its wearer in green armor. Interestingly, Kraken has an association with another S.H.I.E.L.D. baddie that has some intriguing ramifications for his role on the show. Back in the '60s, Whitehall was a member of an organization called Zodiac, a collection of prominent intelligence officials from around the world. Whitehall was codenamed Leo; other members included Nick Fury (Gemini)... and John Garrett (Aquarius).

Zodiac was assembled by none other than an immortal Leonardo Da Vinci (Aries) to find and recover "lost treasures." Whitehall and Garrett were dispatched to Giza with two other Zodiac members to retrieve an alien starship. However it, along with all other recovered artifacts, were stolen by Zodiac's two Russian members when the Soviet Union double-crossed them all, resulting in the dissolution of the group.

Surely it can't be a coincidence that the main antagonists of both Seasons 1 and 2 share a common history in the comics. It can't also be a coincidence that the mission Agent Carter undertakes in her One-Shot short film (released on the Iron Man 3 DVD) is code-named Zodiac. (Granted, the Zodiac turns out to be a serum of some kind and not a group of men, but they must be connected somehow. Perhaps the serum was one of the artifacts recovered by Whitehall and Garrett?)

It remains to be seen if the interlocking histories of all these characters will make the leap from the page to the small screen, but it's starting to look like the brains behind the scenes have some sort of master plan that we're only just starting to glimpse the edges of. Though (rightfully) accused of stalling for much of Season 1, the latter half of that season and everything so far this season indicates a master plan that could end up tying the show directly to the events of Avengers: Age Of Ultron. Hydra head Baron Von Strucker will be one of the big villains of that film, and he and Whitehall share a lot of history in the comics.

One of the main themes of Season 2 is the rebuilding of S.H.I.E.L.D. But it stands to reason that, while our heroes are busy reassembling their organization, the Hydra baddies are doing the same. That would mean that Whitehall is the direct foil to Director Coulson, as both men race to be the first to become fully operational again. The outcome of that race will undoubtedly have huge ramifications on the future of the Avengers franchise.