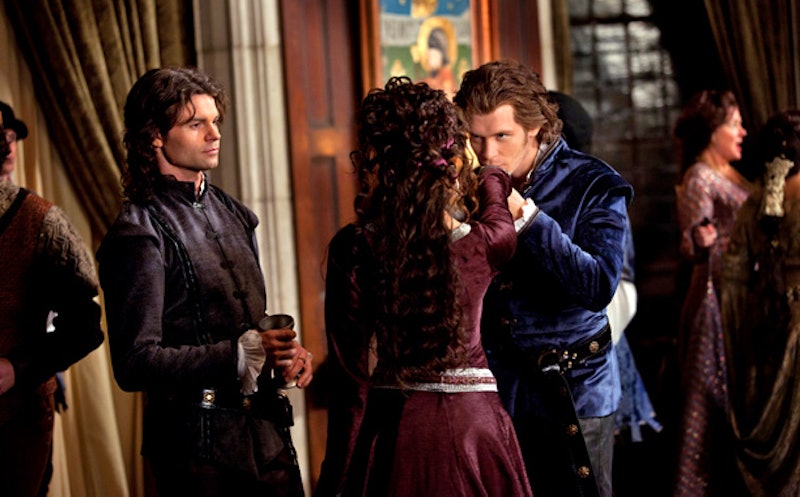 Remember a few weeks back when we assumed/prayed that The Vampire Diaries and Originals crossover would result in a Klaroline reunion? Yeah, those were simpler times. We were so young. So naïve. Then the news broke that TVD ’s Nina Dobrev is the crossover subject this season — to play the very first doppelgänger, Tatia — and our world suddenly became a little less bright. I mean… doppelgängers? Really? I thought we were done with all of that craziness. And given that The Originals is trying to be its own separate entity, I’m surprised Julie Plec is so willing to bring such a pivotal TVD plot device over to the Big Easy.

I know many of you may disagree, but for me, the greatest thing to come out of the whole doppelgänger arc was Katherine. (RIP) So the fact that she’s not involved in any way, shape, or form makes me all the less excited to be introduced to yet another Elena lookalike. (Remember how forgettable Amara was?) But regardless of my own personal bias, what’s done is done, and fans will finally meet, via flashback, the originator of the Petrova line. She's the person whom both Klaus and Elijah fell in love with during their human years — something they briefly recounted for Stefan and Damon during a boys-only dinner party during TVD's third season.

Not only did Esther kill Tatia to end the feud between her sons, but she even used the girl’s blood in order to bind the spell that turned them all into vampires. (I think I’m starting to understand why Klaus killed her in the first place.) So where does that leave us with Season 2? Now that Esther has come back into the picture (unbeknownst to neither Klaus nor Elijah… yet), it would make sense that old family wounds will eventually be reopened. (Think of it like your worst Thanksgiving dinner times a thousand.) And sense we still know very little about this original love triangle, fans will get the opportunity to decide whether they’re Team Elijah or Team Klaus.

Umm, can I be Team Both? Anyway! Flashback episodes are always interesting, especially where the Mikaelson family is concerned simply due to the fact that there’s so much history to all of these characters. They’ve literally been around for centuries, so even though it may not seem like it, we still know very little about them and what made them the way they are today. Tatia should help to clarify some of that since her time with them was right before they achieved immortality. How did their human selves act around her? Which brother did she really prefer? Originals EP Michael Narducci assured fans during a recent chat with Entertainment Weekly that all will be revealed:

We tell a story that will make you understand her fate, what happened to her, her relationship with both brothers and why what happened between her and the two brothers is so beautiful but also tragic.

But all of this got me thinking… Plec almost never does something like this without adding a huge twist into the mix. In the clip, Elijah mentions that Tatia had a child with another man before she was with them, yet he never mentions who it was. Is this because that information is insignificant to the story or does he not know the answer to that question? If it’s the latter, I’ve come up with a crazy theory: what if their father Mikael was actually the father of Tatia’s baby?

Stay with me on this: let's say that there's a one in a million chance that this turns out to be true. It would actually help to explain quite a few things about this family and their rather screwed up dynamic. If Tatia did have Mikael's baby and Esther found out about it, she would understandably be pretty pissed. And then, to make matters worse, she realizes that this same girl is the cause of Klaus and Elijah's feud. So she does what any Original witch mother would do and kills the source of all her problems, even using said person to help her family become immortal. (Killing two birds with one stone and all that.)

That's an awfully big secret to keep, right? Well, what if Mikael actually had feelings for this girl? If he were to find out what his wife did, that temper of his would surely lead to some devastating consequences… like deciding to dedicate his immortal life to hunting vampires — the very creation that marked the end of Tatia's life. Think of how this revelation could unravel the very core of the Mikaelson family, who are all about to be reunited once more in Season 2. If skeletons like these are in their closets, it's bound ignite a full-on war.

But again, this is just my foolhardy attempt at tapping into Plec's creative genius. For all I know, she could have another completely different twist in store for her viewers. Maybe Tatia herself will even be resurrected like Mikael and Esther. Anything is possible when it comes to supernatural shows. But no matter what, this doppelgänger story arc, as tiring as I think the concept may be, is sure to have a huge impact on these two lovelorn brothers and how we as an audience view them from here on out.