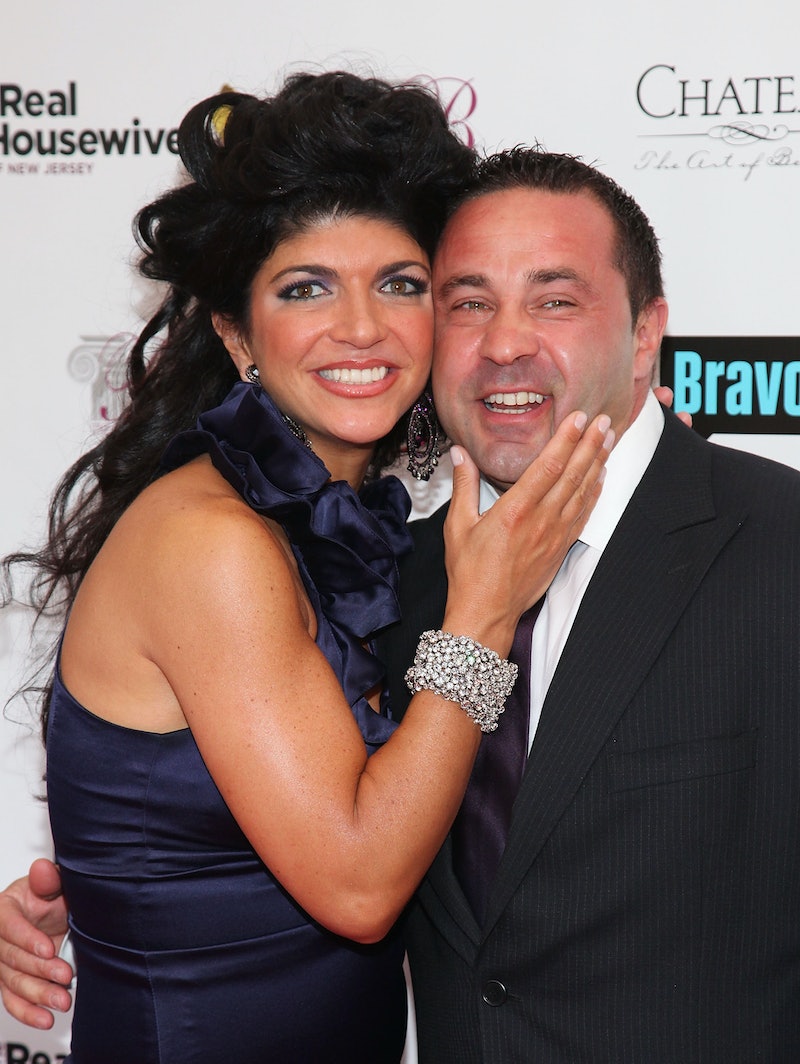 As even people who aren't fans of the Real Housewives of New Jersey have probably heard by now, there are some behind-the-scenes legal troubles going on. Oh, it has nothing to do with the show itself. The problem is that Teresa and Joe Giudice are going to prison for tax evasion and fraud — though their sentences will be served one after the other so that one of them is always home to take care of their kids. However, apparently the problems between the Giudices run even deeper than just their troubles with the law. According to Page Six, Teresa Giudice might divorce Joe because he, quite frankly, "royally screwed her over" here.

Citing anonymous sources from Radar Online, Page Six builds the case that the Giudices were distant from each other throughout the trial and that Teresa isn't smart enough to pull off something like tax evasion: "At the hearing, Teresa said through clenched teeth that she feels like Joe had royally screwed her over. According to Teresa, she only went along with what Joe told her to do. She isn't smart enough to come up with a scheme to milk hundreds of thousands of dollars from banks."

Honestly, the story being true would be more surprising than the fact that a rumor like this would pop up. Considering the kind of trouble that the couple is in right now — added to the fact that Teresa is the one who has to serve her sentence first — then it's a natural leap to believing that she would blame her husband for the mess that they are in and want a divorce. It's also very telling that the story tries to paint her as not being "smart enough" to share the blame in the scheme they're being charged for; it's easy to assume from Teresa's reality show that she and the rest of the RHONJ cast aren't the brightest crayons in the box and thus milk what public perception of her already exists in order to make the rumor more palatable. Too easy, in fact.

It's quite likely that a rumor is all that this is. The Giudices have done nothing but show a united front throughout all of this and Teresa's punishment was considerably less than Joe's — 15 months in jail to his 41 months — not to mention the fact that they were sentenced independently rather than receiving one joint sentence of equal time for both of them. From that we can assume that the judge and jury evaluated their individual roles in the fraud and evasion charges and found them both guilty accordingly. If Teresa were really blaming Joe for all of this, the time to do so would have been during the trial itself.

Considering that just last Thursday, their 13 year old daughter Gia was tweeting "family forever", that makes it even more unlikely that the Giudices are headed for a split. That won't stop people from speculating about it until it happens however.