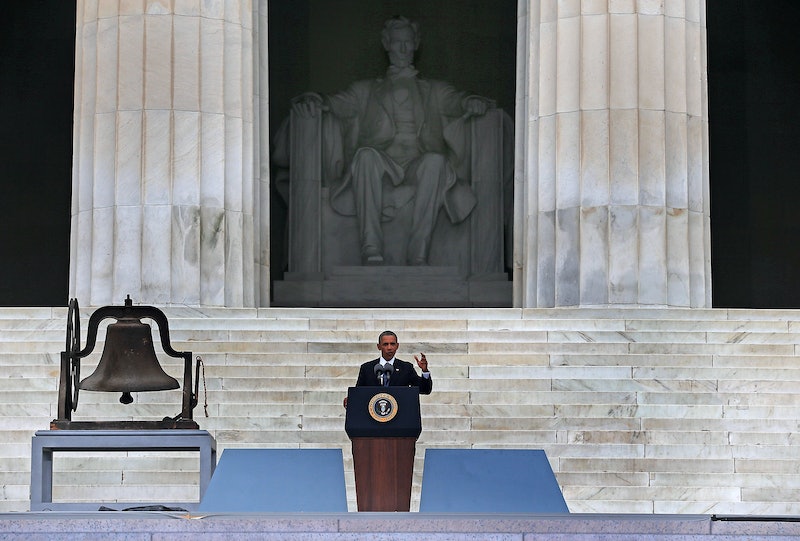 On August 28, 1963 Martin Luther King, Jr. stepped to the podium atop the Lincoln Memorial to address a crowd of thousands who had marched through Washington to demand civil and economic rights for African Americans. The "I Have a Dream" speech he delivered that day came to be known as one of the greatest in American history. In closing, King quoted the patriotic song "My Country 'Tis of Thee," imploring Americans to "let freedom ring."

At 3 p.m. Wednesday, 300 schools, churches, and other public sites in the United States commemorated the speech's 50th anniversary by ringing their bells to echo that iconic phrase. Countries around the world also joined the U.S. in recognizing this historic event, with tributes hosted in the UK, Japan, Switzerland, Nepal, and Nigeria.

On Saturday, thousands had gathered to reenact the March on Washington that preceded King's speech. Unlike the original event 50 years ago, when men and women walked separately down two different avenues, this year's participants joined together in one united march down Independence Avenue. Women were also given newly prominent roles as keynote speakers at the event.

After Dr. King's family joined together to ring the bell on the Lincoln Memorial Wednesday, President Obama delivered his highly-anticipated address. He spoke of the progress our country has made in the last 50 years and insisted that slain civil rights leaders like Dr. King had not died in vain. Yet he also stressed that "we would dishonor those heroes as well to suggest that this work is complete."

It's been a year of painful reckonings about the work that remains to be done. Obama made subtle references to the failure of justice in the trial of George Zimmerman and the attacks on voting rights across the United States. A more overarching theme of the speech was the lack of social mobility and the growing wealth gap in America. He expressed the need to do away with the "pipeline from underfunded schools to overcrowded jails" that plagues African Americans, but also acknowledged that the promise of economic opportunity was failing Americans of all races.

President Obama was also outspoken about the need for all Americans to take responsibility for making change happen. "Racial politics," he sternly suggested, "cuts both ways." Rather than to allow divisions to persist, he urged Americans to honor Dr. King's memory and "reignite the embers of empathy and the coalition of conscience."

And Martin Luther King, Jr.'s original "I Have a Dream" speech: