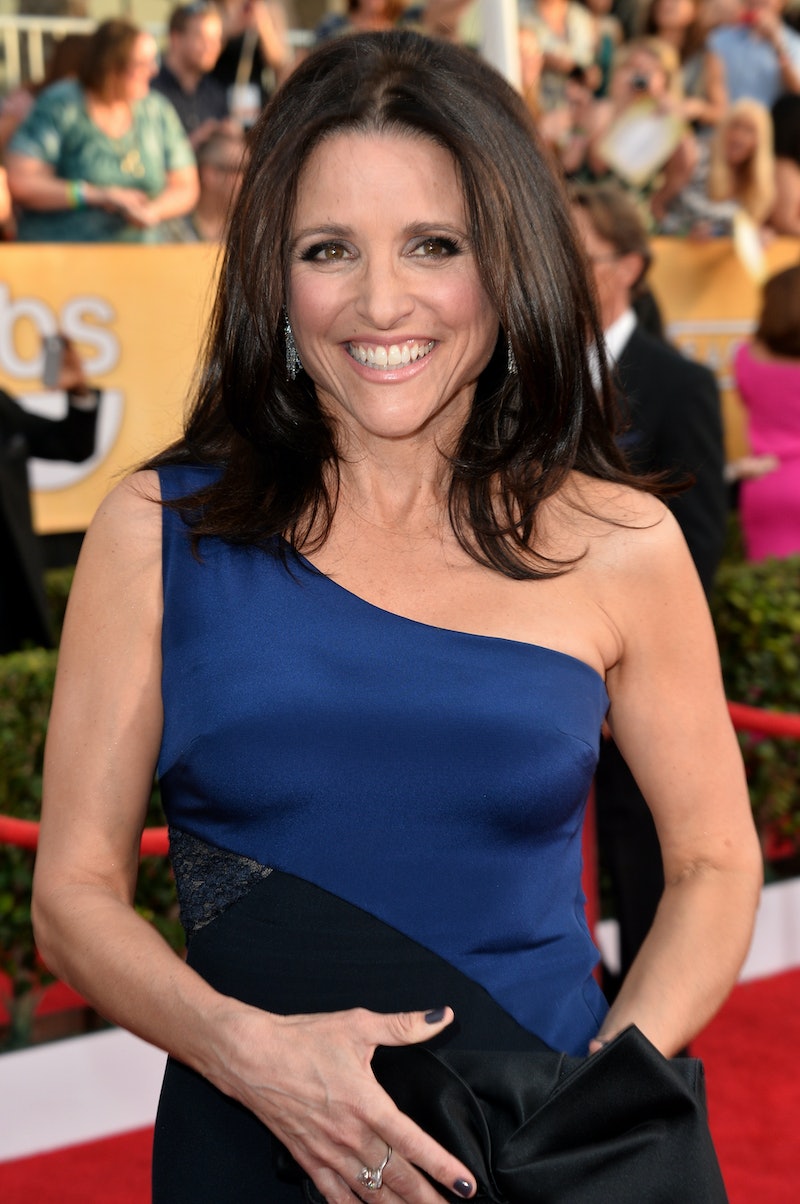 It's harder to find a more universally beloved comedian than Julia Louis-Dreyfus. Maybe Amy Poehler, Tina Fey or Louis CK, but even then, she's in good company of stellar hilarity. The VEEP star is being honored with the Charlie Chaplin Britannia Award for Excellence in Comedy by the British Academy of Film and Television Arts (BAFTA) Los Angeles. At this year's BAFTA LA ceremony for the Brittania Awards, Dreyfus is being recognized along with Judi Dench, Robert Downey Jr., Mark Ruffalo, Emma Watson, and Mike Leigh in various categories of excellence and badassery.

Though it's quite the list of accomplished and highly-acclaimed stars being honored this year, there's no doubt Dreyfus will steal the show with her acceptance speech. She's an absolute pro at turning Hollywood awards ceremonies from ho-hum to hi-freakin-larious. Remember that time she brought Tony Hale on stage and accepted her Emmy in character at the 2013 Emmys or that time she made out with Bryan Cranston in 2014? I wonder if she'll play any pranks with Robert Downey Jr. or Judi Dench...who am I kidding? Of course she will!

According to BAFTA, the Charlie Chaplin Brittania Award honors those “whose popularity and cultural impact exemplifies the uniquely transcendent quality of excellent comedy.” The ceremony will be held on October 30 and will help support BAFTA LA's educational scholarship and outreach programs. Julia Louis-Dreyfus is a most-deserving honoree as her long career has helped cement just how vital women are in comedy. From her early days in Seinfeld, the series that forever changed the American sitcom to her current role as Selina Meyer in HBO's VEEP — here's a look at just a few of the many reasons she just might be the funniest person in the world.

Her commitment to physical comedy is masterful

Who could forget the Elaine dance?

Even without dialogue she can make us laugh

I know EXACTLY how she feels.

She's not afraid to be powerful

Simmer down Reese, you're in the presence of royalty.

Enough Said was just such a cinematic gem. Her performance was touching, subtle, and oh-so human.

Her no-nonsense 'tude is inspiring

Her time will NOT be wasted and she always wants the cold, hard truth.

Julia Louis-Dreyfus, I salute you!