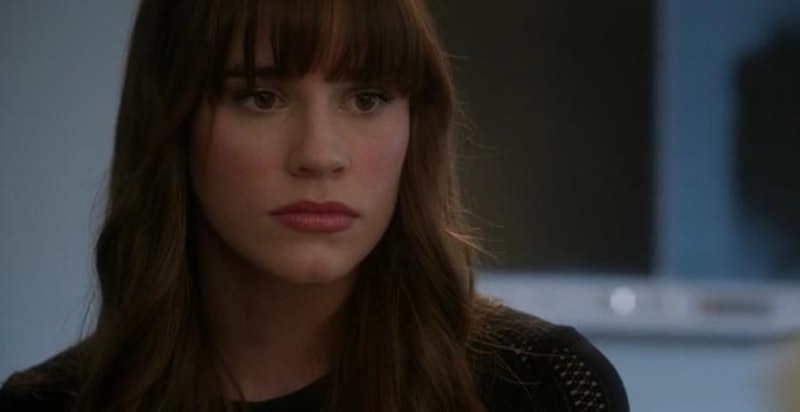 Lots of characters were itching to dish out a heavy dose of revenge on Sunday's episode of the soapy ABC series, but one surprising character took retribution to a whole other level. Emily finally laid her cards out on the table and told Charlotte the truth on Revenge — not only was Emily the one who had her kidnapped, but she was also the real Amanda Clarke, aka Charlotte's half-sister. This will undoubtedly rock the boat for the rest of Revenge Season 4.

The reveal was meant to bring Charlotte some peace — Emily wanted Charlotte to see that she was loved and did have a family member who cared. Instead, Charlotte turned the tables on Emily and told her that their sisterhood was pointless because Emily chose vengeance over own blood. But Charlotte's rejection was just the beginning. After calling her newly found older sister to the Stowaway to talk, Charlotte hits Emily over the head and lights the bar on fire, leaving Emily to burn. (How very One Tree Hill. ) Now the question is: Has Charlotte become Revenge's new villain?

It certainly seems likely. The youngest Grayson (or will she still be sticking with Clarke?) has had her share of problems over the show's four seasons, but her ups and downs have lately become a series of really rough drops. I'm not sure if Charlotte can come back from her recent attempted murder — at least, not for a while. Here's why Charlotte could be the new Revenge villain.

If Sunday's episode wasn't already an indication that Charlotte needs some serious help, how about we rewind to basically Charlotte's entire existence? Last season, Charlotte dealt with losing a baby, the death of her boyfriend, and being a pawn in a kidnapping plot. Any one of those things would royally mess with someone's head, but Charlotte doesn't exactly come from the most stable DNA. (I mean, she is Victoria's daughter and Daniel's sister.) Now she wants someone to pay for the pain that she feels — and it's kind of every Grayson's M.O. to go after Emily.

She Escalated to Murder Really Fast

Even Victoria was a little shaken up by her first murder. Charlotte, on the other hand, barely batted an eye as she lit the match that incinerated the Stowaway. If that's not a psychopathic tendency, I don't know what is.

She Knows Who Emily Is Now

Right now it seems that the only thing stopping Charlotte from running her mouth about Emily's real identity is that she thought she murdered her in a bar fire. Process that for a moment. Victoria is ready to have Emily's real identity plastered on the national news, and I wouldn't be surprised if Charlotte felt the same way... assuming that Emily escapes that pesky little fire.

Mostly because he gives her money, but also because he's the only sibling who didn't lie to her about his identity for years on end. And Daniel, as we know, is seriously bad news. He already tried to murder Emily, though I guess that puts the Grayson kids at a tie in that competition. The only relative that Charlotte can seemingly stand right now is Daniel, which might mean bad news for Emily. Emily's dropping friends left and right, and she certainly doesn't need Charlotte teaming up with perhaps her worst enemy outside of Victoria.

So could Charlotte go after Emily Victoria style? It's totally possible — but let's hope Charlotte gets all of those murderous thoughts out of her head ASAP. I recommend a serious detox.