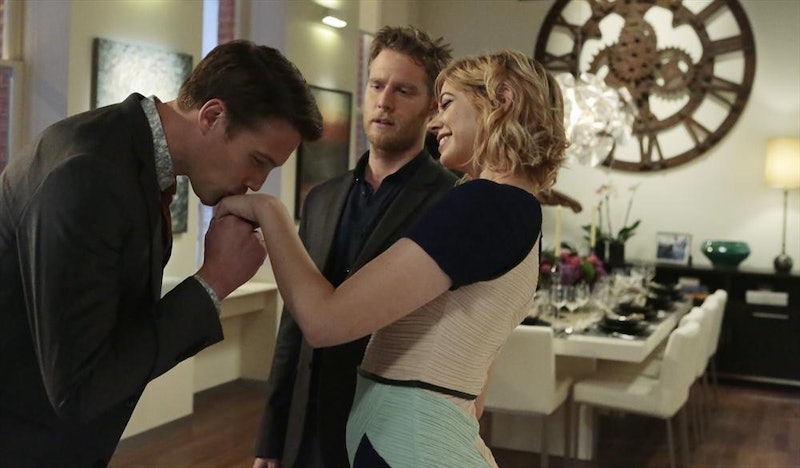 Fall would be nothing without a mass of shows on your DVR just waiting to be watched, and none so much as the light-hearted comedies that seem to take over late night television these days. But after its premiere on ABC last week, brand new series Manhattan Love Story ratings may spell cancelation as they put the show in third place in TV's comedy block with only 4.3 million viewers, according to EW. The pilot of any new show needs to immediately catch the viewers' attention, and the romance between Dana (Analeigh Tipton) and Peter (Jake McDorman) just didn't quite do it. Adults ages 18 to 49 only gave TV's new hottest couple a 1.3 rating, which is not great news for ABC considering last season's Mixology — another gimmicky rom-com — was cancelled for low ratings. It's likely that this love story will come to the same fatal ending if it doesn't step up its game, and fast.

As a Greek and America's Next Top Model fan, I really wanted to root for Analeigh Tipton and her on-screen boy toy Jake McDorman. But Manhattan Love Story relies on the tool of constant inner monologues, and while it should up the narrative game, it really does nothing for the narrative or for either of the main characters. But there is one thing that could possibly save the show: the pull of a couple playing dating on- and off-screen. Analeigh Tipton and Jake McDorman are dating in real life. And they're adorable together:

I know, I was confused too. Not about that floating umbrella in their photo together, but about the apparent relationship between my beloved Greek's Evan Chambers and my favorite EVER ANTM contestant Analeigh. (!!) Even though the pilot really didn't show as much chemistry as I had hoped, it might help ever so slightly that the two protagonists happen to make an impressively compatible couple off set. Jake, 28, and Analeigh, 25, are both quirky, free-spirited, and painfully attractive twenty-somethings that everyone can relate to off the show. So if the Love Story creators can figure out a way to portray that chemistry on film, it might just save ABC another sitcom cancellation.

Unfortunately, Manhattan Love Story failed its first and potentially most crucial test: leaving the audience wanting more. During the first episode, I was trying to figure out where ABC went wrong. Was it the boarder-line annoying inner monologues? Or did it not leave us hanging enough to keep our attention? Both factors are a bit of an issue, but considering the show BEGAN with only 4.3 million viewers, failing to string us along into the next episode probably isn't a great sign.

Then again, perhaps the modest showing in its premiere is a promotion issue. ABC married Manhattan Love Story to its other new rom-com Selfie by throwing them into the same commercial, and honestly, it took me a while to realize that they were actually two different shows. I really had no idea what I was getting myself into when I turned on the pilot, other than that two of my favorite actors were starring in it.

Perhaps if ABC had advertised it more singularly, Manhattan Love Story might have captured more viewers who were hungering for this sort of will-they-won't-they cutesy romance. I'm still rooting for Manhattan Love Story's Dana and Peter and hope against the past performances of almost every new network sitcom ever — hey, the miracle of higher ratings in Week 2 could theoretically happen. And if that happens, I'll be thrilled, because if there's one thing missing from my TV list, it's an honest-to-goodness New York City romantic relationship.