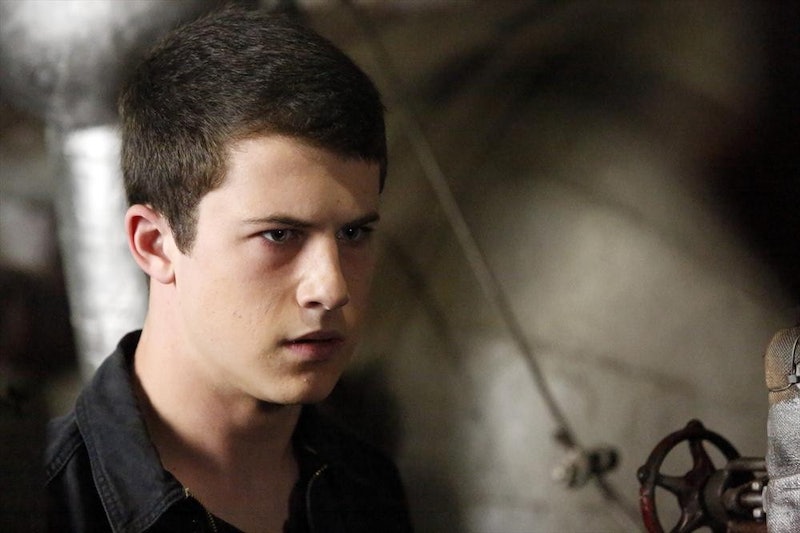 This week's new episode of Agents of S.H.I.E.L.D. marks the return of Donnie Gill, a troubled teen who accidentally gave himself super ice powers. Whether you prefer to make Elsa jokes or Frozone jokes with that, Donnie Gill does have a comic book origin. He is a supervillain known as "Blizzard." We first met Donnie Gill in Season 1 and I'm thrilled about this character's return to the show, for both S.H.I.E.L.D. and also for Scandal. The actor who plays Donnie, Dylan Minnette, also played President Fitzgerald Grant's son — who died tragically at the end of last season. That's a terrible tragedy, but it's television and I like Drunk Mellie Grant the best. I'm a monster. One ABC drama's loss is another ABC drama's gain.

Regardless, Donnie Gill is back. According to the trailer for the episode, titled "Making Friends & Influencing People," Donnie appears to be working for Hydra. Who isn't, these days? No word yet on whether or not he'll be donning a "super suit" a la his Incredibles dopple-ganger. Before we break the ice, let's refresh ourselves. Who is Gill? Where does he come from? What can he do? Why are we scared of him? He seems relatively sweet, but easily swayed by the dark forces. Youths!

The Season 1 episode that introduced Gill played like Harry Potter crossover fan fiction. We went to S.H.I.E.L.D. academy, where gifted students partied hard and were mysteriously attacked, one by one. Ravenclaw (Science and Technology) thought they were better than Gryffindor (Operations) and everyone made fun of Skye for being in Hufflepuff (Communications). FitzSimmons gave the students "the talk" to use their brains for good, but it wasn't until Fitz tried to comfort a kindred spirit, a lonely kid named Donnie, that the culprit and his true purpose was revealed.

Donnie Gill and a buddy of his named Seth had been commissioned to deliver technology to the Season 1 "Medium Bad" (as opposed to Big Bad) Ian Quinn, the venture capitalist. However, the technology wasn't working properly. So they started attacking students in order to get Fitz on campus and trick him into fixing their problem. It was a pretty convoluted plan but hey, it worked, so good on them. It's not like they're on a TV show or anything. The machine froze people. It ultimately created a giant snowstorm and killed Seth. This got Donnie Gill sent straight to S.H.I.E.L.D. Azkaban aka "The Sandbox," which as you may remember was broken into at the end of last season, courtesy of Hydra's takeover. Donnie Gill is on the loose!

The cold never bothered him anyway

In the comics, Blizzard is a petty criminal recruited by villains to join up. He has water manipulation powers similar to his television counterpart. He typically appears in the Iron Man comics. He might have a crush on She-Hulk. He has, on occasion, sought redemption and fought the good fight alongside other former villains. FUN FACT: Donnie is an Inhuman, a species of human-like people largely speculated to be coming to the Marvel Cinematic Universe via Agents of S.H.I.E.L.D . His powers were enhanced upon exposure to Terrigen Mist.

Also in the comics, Gill was hired by Justin Hammer. If you remember from Iron Man 2, Justin Hammer was the bigwig played by Sam Rockwell who hired Whiplash, aka Ivan Vanko (played by Mickey Rourke), to take down Tony Stark with an army of suits and revenge and stuff. I honestly don't blame you if you have blocked Iron Man 2 out of your brain space. It isn't the strongest MCU contribution, but it has it's moments. In my opinion, Ian Quinn is a similar kind of character on Agents of S.H.I.E.L.D. He wears eccentric suits and hires superpower-ed baddies to do his dirty work for him.

We'll just have to wait and see how much Agents of S.H.I.E.L.D.'s Donnie has in common with his comic book counterpart.