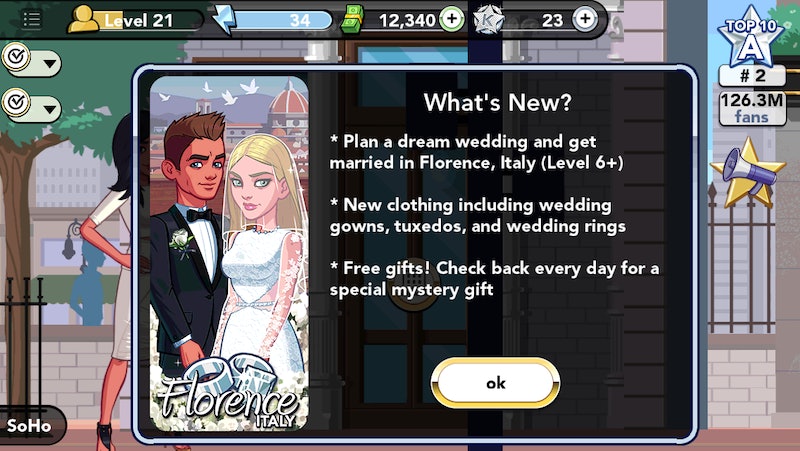 Look, just because it's a game, doesn't mean that getting married is easy. Did you see the Keeping Up With The Kardashians Season 9 finale — weddings aren't easy even when you're Kimye. Devoted fans of the Kardashian game jumped for joy when its latest update included that great new feature that your avatar can now get married in Kim Kardashian: Hollywood . Heck, even I let out a little squeal at the possibility of getting married, Kimye-style, in Florence. (Especially with the possibility of learning additional, tiny details about Kimye's ceremony which was unjustly kept from fans in the KUWTK finale.) But, alas, it's been almost two weeks of dating and still no ring. So, how do you get engaged in the Kardashian game?

Apparently, it's not as easy as, say, pissing off Willow Pape by calling her crazy. Or even as easy as getting broken up with by someone that you're on a date with. (Sorry, I'm so bitter about this that I can hardly live with myself. Damnit, Kim.) We already know that after your significant other proposes, Maria suggests that you go on three more dates so the media knows it's real. But what we don't know is how, exactly, you get your significant other to pop the big question so you can wear the big rock.

Sure, it's easier than real life dating and proposals (probably because you're more likely to put up with your significant other's insults about your outfit in this game than in real life — at least, I hope). But according to the ChapterCheats engagement message board, there's a lot of red tape surrounding the actual proposal in KK: H. So, here's what you should and shouldn't do to get engaged on KK: H:

Dating in Florence is good and might help you convince you boyfriend or girlfriend that you're "getting serious," but you can't only go on a hundred dates there expecting a proposal. At least, that's advice from this KK: H player, NJC:

You don't need to be maxed out with your gf/bf to get proposed to. I didn't have a bf before this new update. I just got one and we're currently at #97 on the couple list and I already bought my dress, venue, and decorations. It took about 3-4 dates before he popped the question. Then after 1 more date you'll get the ring.

Yes, Florence is a romantic place and it is blessed with Kimye magic. But it won't help you get engaged any faster, I'm sorry. Also, stop trying to cheat the system of KK: H.

You Don't Need To Be A Maximum Hearts With Your Date

Nor does it mean anything if you're already have maximum hearts with your significant other. A handful of KK: H players have asked this question on the ChapterCheats message board, but the responses have been all over the place. So, if you're killing yourself to fill that love bar, stop. Because the most valuable clue is coming.

Multiple KK: H players wrote on the the message board that they've been proposed to without achieving maximum relationship hearts. So, while it's important to maintain your relationship, how many hearts you receive is arbitrary to the engagement process.

You Have To Complete The 10ax Opening

This was the most helpful response on the ChapterCheats message board and I'm inclined to believe that it's the truth. Considering I've been on a series of dates with my significant other and have yet to be asked the fateful question. KK: H player Redmau says:

You have to finish the 10ax opening first (the one with Simons surprise birthday party), go on a date afterwards where you're bf/gf says things are getting serious and you will have to go on the perfect dates. On the fourth, he/she will propose.

Now, this is just hearsay, but it would make sense for my situation, as I've only made it to the photoshoot portion of the 10ax challenge. And, well, this is a game, so there obviously has to be requirements, challenge-wise, to qualify you for an engagement.

So, what does this mean? Obviously that I'll be checking back with a definitive answer after I fiendishly play this game (while trying to not spend real money on K stars and energy bolts) to complete the 10ax challenge. Wish me luck. And to all of those who have already had the question popped to them — congrats, you lucky sons of a gun and good luck affording those wedding gowns.