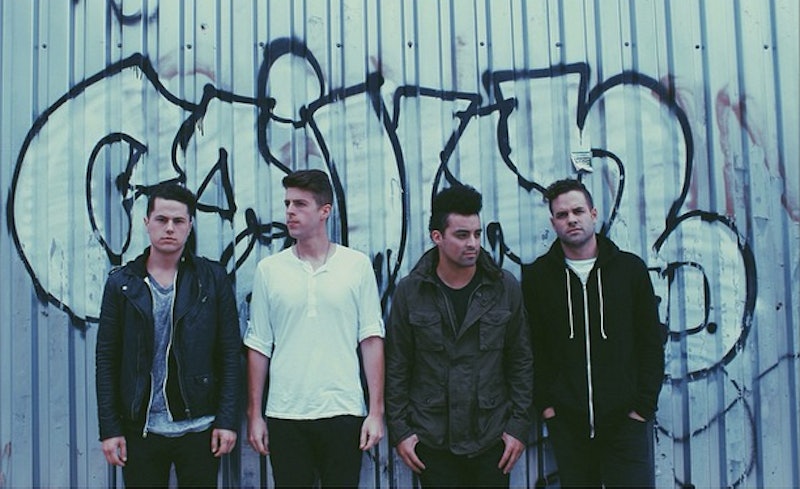 You might not know who these guys are, but you should and you'll be happy when you do. Dinner And A Suit are releasing their new EP, Stay , on Oct. 7 and the four-man band with, collectively, the coolest hair I've seen in awhile, will immediately win you over with their sound. The group, who've become Nashville, TN transplants from the East Coast, sat down with Bustle to chat about their new album (which they recorded live, in a testament to the old school method), feminism, and why they chose their band name. Which, singer Jonathan Capeci calls "a blessing and a curse."

So, why Dinner And A Suit? Capeci and his cousin, Joey Beretta, agree that, while other names were an option, they were arbitrary, so they chose Dinner And A Suit because it had meaning. "We’re big proponents of doing whatever you can with whatever situation you’re in, that kind of people," Beretta tells me about the decision to name the band for his and Capeci's great grandmother who was a seamstress who repaired suits during World War II. "I think that's why I liked the name," says Beretta, the guitarist.

The big decision of what to call themselves came back when Capeci and Beretta were still playing music "as a pastime in college." And, they've evolved since then — adding childhood friend Anthony Genca as their bass player, relocating to Nashville, and adding drummer Drew Scheuer after finding him on YouTube. Capeci says the evolution of the band "moved from being something that we did as a pastime to being something we became really passionate about and wanted to pursue as a career." And now, luckily for all of us listening, they're giving it their best shot.

Of course, with a band named after their great grandmother's strength and compassion, I had to ask the group what they thought about Emma Watson's amazing United Nations speech about feminism. But, unfortunately, between putting the final touches on Stay and being on tour, they hadn't had a chance to see the now viral video. Still, they have a few thoughts on the topic of feminism.

"Both of our moms are entrepreneurs," Capeci says of his mother and Beretta's mother, who the band worked for while getting on their feet, "My mom has a publishing company and his mom has a painting company and we grew up in an environment where that’s cool ... I can’t really picture too many people being like, ‘No, I’m sorry…'" he says, in reference to equal pay and equal treatment for everyone. With that, the rest of the band voiced their agreement.

Beretta also shared about the women in his family. "My sister is super smart and super go-getter," he told me before explaining that he's never really experienced anti-feminism firsthand and that his dad is "the nicest guy in the whole world" in the way he treats Beretta's mother. "We’re definitely huge proponents of all of that for sure."

Dinner And a Suit performing on the Bustle rooftop.

Since they formed in 2012, the indie-rock band's had songs appear on MTV, which they call "a cool thing," because it launched them pretty high up on the charts. But their new EP Stay, is a different kind of animal for them because of the creative decisions they've made. "We tracked a lot of the stuff live, all playing at the same time, which traditionally, I guess, that’s an old school way of doing it," Capeci says about the band's decision to go after a more raw, inclusive studio experience. And while they all agree, as Beretta and Scheuer say that the process was "stressful" and "more vulnerable," they couldn't be happier with what they've done.

"It’s got more attitude to it because it’s not 100 percent perfect like a lot of music now which everything is in tune perfectly and timed perfectly," Beretta says, adding, "there are little things here and there that give it character." That definitely explains why each member of the band seems to be drawn to a different song off the EP when I ask which they connect with the most.

Capeci and Genca are both fans of Stay's final song, "Everything That You Do," while Beretta favors "A Way Out" because of it's vibe and the fun the group had recording it. "I like 'Get You Back,' I’ll change it up," Drew said with a laugh. "Get You Back" is Stay's big ballad and because of the extensive percussion instruments he got to "nerd-out" about and play while the band tracked it.

The group, who credit Switchfoot as an early influence on them as high schoolers learning to play guitar and who aren't afraid to admit their love for Taylor Swift (Beretta says, "I like T Swift – I’ll say it."), feel that this EP is indicative of where they are right now. "We’ve stepped forward to the best place that we could with the bands that we liked and then at a certain point we were like, ‘Now we want to figure out who we are,'" Capeci says. They've gotten comfortable with themselves and more cohesive over the past two years and they definitely believe that's reflected in the sound of their latest release.

So, they've been featured on MTV and the Billboard charts and they're releasing their biggest effort, but have they had their game-changing moment yet? Capeci says,"There’s usually one [moment] a year were I’m like, ‘This is crazy,'" including the Scheuer's first club show where the band played with Imagine Dragons. But Beretta is torn between the band's big move to Nashville: "We were like, 'We're going to move. We're doing it.'" But it all came together when they paid for dinner with the band credit card.

"I was like, ‘This is amazing. We started this company and now we’re paying for our dinners with it,'" Beretta says with a laugh. But Capeci had to keep the group humble, adding, "It was Little Ceasars."

Dinner And A Suit's new EP, Stay, will be released on Oct. 7 on iTunes.