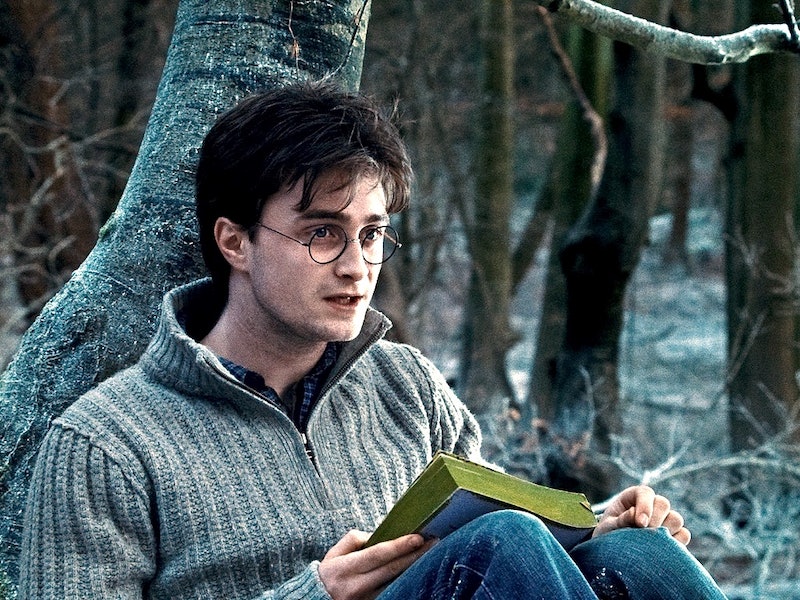 In the dedication of Harry Potter and the Deathly Hallows, J.K. Rowling might have thanked fans for sticking with Harry "until the very end," but it seems that luckily, that end hasn't come just yet. We've known about the upcoming Fantastic Beasts and Where To Find Them film for a while now, but recent cryptic tweets from Rowling herself seem to have revealed that it's not the only thing Harry Potter fans have to be excited about. If one particularly brilliant fan is right, one of those tweets is actually an anagram for "Harry returns! Won't say any details now. A week off. No comment." And while it may seem like a hint that Harry will appear in Fantastic Beasts, there are actually plenty of other ways Harry could return — some more exciting than others.

Yes, seeing Harry again in Fantastic Beasts would be kind of awesome. The movie's 1920s New York setting is already a huge draw for fans like me who spent seven books waiting for just one American Hogwarts student to give us a little hope. But that setting also means that if Harry does appear in the movie, it can't be as part of the main plot, unless we get some more time-turner or pensieve action, or some kind of flash-forward scenario. And since Daniel Radcliffe didn't exactly seem interested in being part of that film, I think it's best we look at our other options. Here a few other ways Harry could return, while we wait for Rowling's comment-less "week off" to end.

A Next Generation Book (or Series)

I think it's safe to assume that Rowling is done with the Harry Potter series we all grew up with, but that doesn't mean she's done with the entire world she spent so much time creating. While many fans may be clamoring for a book series about the marauders, that couldn't realistically include Harry (except a quick glimpse of him as an infant), but a series about his own children obviously can. The Deathly Hallows' epilogue might've caused divisive reactions among fans, but that doesn't mean we're not curious about the trio's kids.

Was Albus sorted into Slytherin after all? Did he ever forgive his parents for naming him Albus Severus? Are Teddy and Victoire endgame or just a fling? Will Rose Weasley and Scorpius Malfoy get together and fulfill their parents' nightmares? Is Neville even hotter as a Hogwarts professor? These are just some of the questions a next generation spinoff series could delve into.

Teddy might've seemed like he was just doing fine in the epilogue, but if the ending of Deathly Hallows was devastating for anyone (besides you know, everyone who read it), it was Teddy. Both of his parents were killed in the Battle of Hogwarts, when he was too young to even remember anything about them. At least he has a godfather known to everyone in the wizarding world to tell him about them — wait a minute, why does that sound so familiar? Oh, maybe because it's basically Harry's exact situation, except slightly more uplifting since Teddy's grandparents/guardians aren't cruel like the Dursleys and his godfather isn't wrongly imprisoned for mass murder.

The parallels between Teddy and Harry have lead many fans to hope that he'll someday receive his own series — one that could include Harry quite easily. Harry took his role as godfather very sirius-ly (sorry) and obviously would've continued to play a large role in Teddy's life. I'm sure a Teddy Lupin series would show Teddy seeking out his godfather for advice, stories about his father, Quidditch lessons, and much more. This might be the best way for Harry to return, since he'd be included in the series, but not its main focus.

Remember how insanely scandalous and over-the-top The Life and Lies of Albus Dumbledore was? Imagine the Harry version. In a 2007 live chat transcribed by The Leaky-Cauldron.org, when asked if Skeeter was still writing, Rowling said, "Naturally, what could stop Rita? I imagine she immediately dashed off a biography of Harry after he defeated Voldemort. One quarter truth to three quarters rubbish." I would eat a pound of earwax-flavored Bertie Bott's Every Flavour Beans to get my hands on that book.

In a recent post released on Pottermore, Skeeter and Ginny Weasley Potter took turns narrating the Quidditch World Cup and seeing the characters we love so much from Skeeter's salacious perspective was an awesome change of pace from Harry's moody POV (yeah, I said it. The guy can be a whiner). A full book about Harry written by Rowling-as-Skeeter would not only show the events we already know from an insanely funny perspective, but fill us in on what happened to everyone after the series in a less traditional, unexpected way.

The Ultimate Cop Out: Pottermore

If all of this was a way for Rowling to announce more Harry-specific content on Pottermore, I think I speak for all Harry Potter fans when I say, how dare you, J.K.? We have nothing but respect and admiration for you, and owe you so much, but all of this setup for a few chapters on Pottermore would be a huge letdown for those of us coming up with more interesting ways to see Harry again. You helped us strengthen our imaginations, please don't let them fail us now.

Pottermore is fun and I love all of the new content it's produced, but the phrase "Harry returns!" is way too exciting to end in "with another chapter of the epilogue on the new level of Pottermore." It's been seven years since Deathly Hallows ended Harry's story, there has to be enough material to make up more than that.