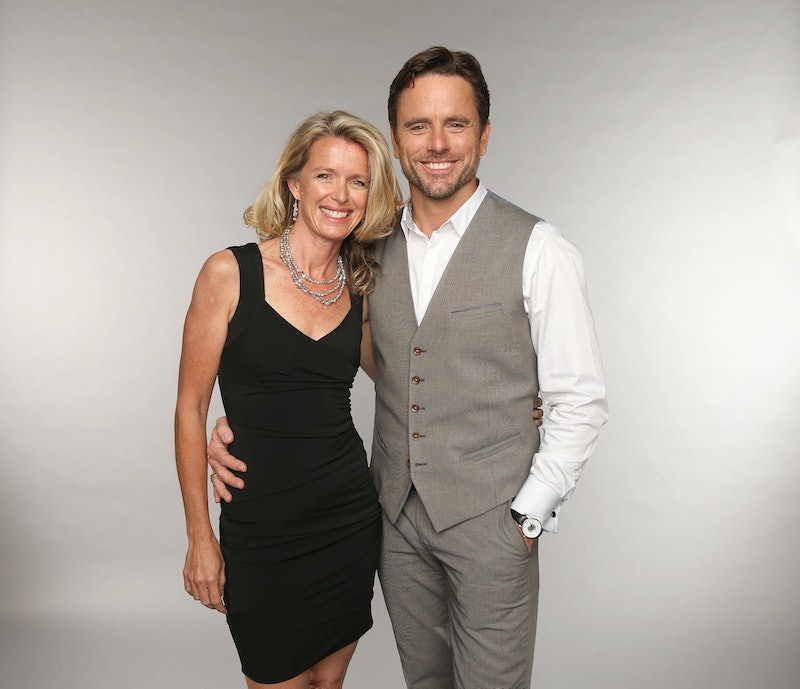 On ABC's Nashville, Deacon Claybourne is that dreamy rebel with a five o'clock shadow and a brooding song in his heart for long lost love Rayna Jaymes. His life, though? Mostly a mess. In real life, the actor who plays Deacon on Nashville , Charles Esten (who sometimes goes by Chip), has a way more steady love life and family. The Pennsylvania native is a hard-working actor with a funny side — he was called Chip on Who's Line is it Anyway? — as well as being a loving husband and father to his children. That's right, Esten is very much taken and has been for decades. Esten is married to Patty Hanson Puskar, who is his college sweetheart.

The couple married in 1991 and Patty took his actual surname, Puskar, which their two daughters and son also use. The 49-year-old actor actually uses his middle name Esten as his professional surname. Esten and wife Patty truly have been through sickness and health throughout their 23-year marriage. Not much is known about her professional life — she has a 1996 credit as Kevin Costner's assistant on the film Tin Cup — but it is clear that Patty has had Charles' back since the day they said "I do."

Patty Hanson enrolled at the College of William & Mary from Italy, and shared with the school's alumni association in a June interview exactly how she ended up there. She came from a military family that moved around a lot, but the Williamsburg, Va. university actually wasn't her first choice school in the states — she wanted to attend Duke University in North Carolina, where she didn't get accepted in time. “And I was like, ‘Well, no. Everyone else thinks I’m good enough, so forget you!’" Patty said in the interview. "So I came to William & Mary. Just random. But God had a plan because that’s where I met Chip.”

The two knew of each other on campus before they really got to know one another. They were attracted and intrigued, but Patty was already in a long-term relationship and Esten was busy singing and playing rhythm guitar in his band, N’est Pas.

But then Patty and her then-boyfriend broke up and she went to see N’est Pas play at a campus fundraiser. Esten spotted her in the audience. “I called an audible and changed the song and played ‘Romeo and Juliet’ by Dire Straits," he told his alma mater. He was singing the song right to her and she didn't believe it at first. They began dating during their junior year of school — and they've been devoted to each other ever since.

In Sickness & In Health

Patty and Esten wed on Nov. 2, 1991 at All Saint's Episcopal Church in Winter Park, Fla. They went onto have three children — Taylor, Chase, and Addie. Addie was diagnosed with leukemia at 2 1/2 years old and the family was thankful that their doctor already had a list of options to fight their daughter's disease. “And the reason she was able to say that was because of all the research — and all the fundraising that went into all that research — that makes that survival rate creep higher and higher every single year,” Esten said at a leukemia fundraiser event in Tennessee last year. Today, 14-year-old Addie is completely healthy.

Esten used to split time between Los Angeles (where Patty and the kids lived) and filming in Nashville. It was tough, but Patty made it work, even flying out last minute to Tennessee to catch her husband make his Grand Ole Opry debut last year. But there's no need for the cross-country travel anymore — the whole family has relocated to the Volunteer State.

Now if only Deacon could find the same kind of love on Nashville.