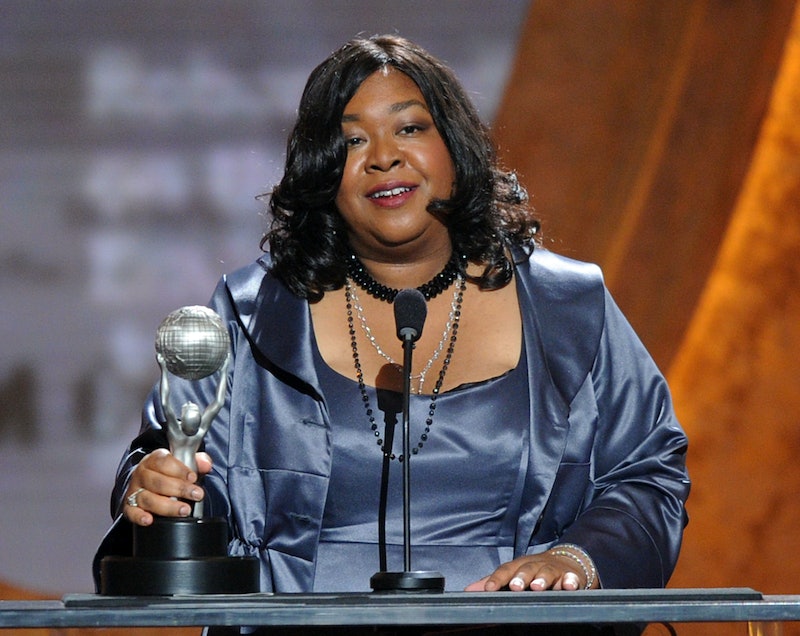 Thursday nights on ABC have become the altar of worship in Shondaland: the lineup is dominated by Shonda Rhimes' three shows, Grey's Anatomy, Scandal and the new How to Get Away with Murder, which is already killing it in viewership. Rhimes' success is almost unparalleled in the primetime lineup, but there's been an an ugly shadow cast upon it — that notorious New York Times piece from critic Alessandra Stanley that called Rhimes an "Angry Black Woman," and worse, Stanley went on to claim that she meant it as a compliment. Rhimes initially responded on her Twitter, and as the cover girl for the October issue of the Hollywood Reporter, she discusses the article's racist, sexist implications more at length:

In this world in which we all feel we're so full of gender equality and we're a postracial [society] and Obama is president, it's a very good reminder to see the casual racial bias and odd misogyny from a woman written in a paper that we all think of as being so liberal.

In that statement, Rhimes finds Stanley's boorish misunderstanding of How to Get Away with Murder and the rest of her own empire to ultimately be useful. The showrunner makes an example of the New York Times, which published the critique without batting an eye. It speaks to Rhimes' confidence that she did not want a retraction of the article, because it reflects the ever-present problems of the television world (and the world at large, of course). Numerous stars that Rhimes has worked with spoke out about Stanley's article, and Viola Davis tweeted a powerful quote from Maya Angelou in response to the vitriol. While Stanley's piece was a blatant and unforgivable reduction of Rhimes, however, she is not a singular entity in the racism and sexism of Hollywood — far from it.

In his acceptance speech at the Emmys, Stephen Colbert made that prickly remark about only having one woman on his staff. I love Colbert and think his value as a satirist pundit is nothing to be laughed at, but when a man I respect so much devalues the importance of women on his staff, his value to me diminishes. Losing trust in Colbert only adds to the continuing embarrassment that is the bid for diversity on Saturday Night Live; every inch of progress seems to be undercut by another misstep. For example, Michael Che became the first black host of Weekend Update, which is fantastic; however, he edged out Cecily Strong. Why must they pick and choose our diversity? Is there not room enough for both a black man and a woman to succeed at the Update desk? I shouldn't be surprised, considering's SNL's exhausting list of offenses; this year, only one of their five new staff writers was a person of color.

SNL and The Colbert Report present themselves as, and are upheld as, cornerstones of liberal media, but as Rhimes points out sharply in her interview, even the most "liberal" of entertainment outlets are rife with diversity issues. It is even more disappointing when something so radically progressive seeming, like Colbert, is guilty of some of that same misogyny. Rhimes also shared this anecdote with the Reporter: She read a draft announcement for an event where she was set to appear. It called her "the most powerful black female showrunner in Hollywood." She crossed out "female" and "black" and sent it back. "They wouldn't say that someone is 'the most powerful white male showrunner in Hollywood,'" she said.

And she's right — those modifiers only apply to those outside the white, male status quo in Hollywood. Until there is no longer a need for that distinction to be made, for black, female showrunners to be grouped into a separate category all by themselves, there will be an issue in Hollywood. And one of the most dangerous part is not when there are blatant displays of this racism and sexism, like Stanley's article, but when outlets we trust as progressive reveal themselves to be less so than they seem.

More like this
Amanda Gorman Shared A Powerful Message On Meghan Markle’s Penultimate Podcast
By Darshita Goyal
Elizabeth Debicki On Her Approach To The Most Debated Scene From 'The Crown'
By Grace Wehniainen
The First Trailer For 'That '90s Show' Includes So Many Nods To The Original Series
By Jack Irvin, Alyssa Lapid and Grace Wehniainen
Matt Smith Proves He's Daddy Daemon In This Viral 'House Of The Dragon' Video
By Marina Watts
Get Even More From Bustle — Sign Up For The Newsletter