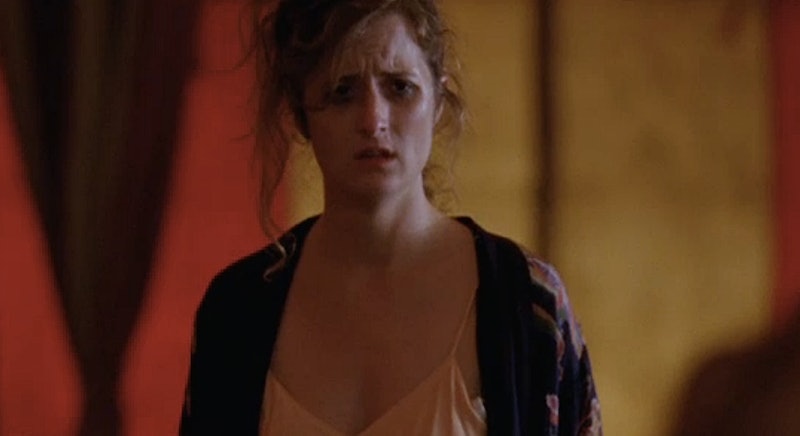 I'll admit that I immediately had my defenses up when Grace Gummer's Penny The Candy Striper came stumbling into the big top on the season premiere of AHS: Freak Show . She had makeup streaming down her face, she was crying, and her clothes were a wreck. My mind immediately shot to some sort of assault, despite knowing that Elsa Mars' freaks are supposed to be good people. And when the old timey sex tape reel rolled and Penny voiced her protestations, I couldn't help but suppose that despite the freaks' best intentions, Penny may have been raped at the Freak Show .

Of course, I think this scene is supposed to depict something that is not rape. From the dialog between Jessica Lange's Elsa Mars and Penny, the point of the exchange is likely supposed to be that when Penny loosened up a bit (likely from a little booze and whatever is in that fancy cigarette of hers), she was able to look past the things that make all of Elsa's performers "freaks" and accept them (and their sexual advances) without prejudice. However, in the light of day (and with what is probably an awful hangover), Penny regrets the decisions she made while loose, but not incapacitated, because she is a mean-spirited person who simply hates freaks.

It does not, however, read that way on screen. At least not for me. In the homemade film, Penny's head bobs around and her eyes look a little vacant:

She looks, in a word, incapacitated. Yes, in the video she's smiling, which is likely why when Penny sees this night of sexual experimentation being played before her, she muses with an inquisitive tone, "I liked it." But smiling doesn't mean she's in a state in which she's able to give or deny consent. Even when Penny says she liked it, she doesn't totally seem sure.

It reminded me of the rape scene from cult drama Veronica Mars, in which Veronica tries to remember the night she was roofied and raped. Various witnesses claim she got drunk on her own or took drugs (she didn't), but it all boils down to one final scene: when she's incapacitated, in a bed, smiling and mumbling to the guys in her room as one of them is told to have sex with her. We don't see the sexual encounter, but by the season's end, we know without a doubt that Veronica was raped, and her smile and being somewhat awake at the time don't change that. There was no consent.

Obviously, on AHS, the black and white sex tape isn't going to be able to show us the moment at which Penny did or did not consent to the sex acts, but I wonder about the writers' choice to use this as the vehicle for Penny's hateful expressions towards the freaks. I wonder even more at their choice to have Elsa insist Penny wanted it when Penny clearly says she didn't.

In fact, it brings to mind some hateful comments that came about when Lena Dunham released an essay about being raped while high on cocaine and Xanax in her book Not That Kind of Girl. Dunham writes:

I was at a party, drunk, waiting for attention…. And somehow that felt like such a shameful starting-off point that I didn’t know how to reconcile what had come after. But I knew that it wasn’t right and I knew in some way that this experience had been forced on me.

While many women have praised Dunham for coming forward, some have stooped to victim-blaming (just searching "Lena Dunham rape" on Twitter will supply you with more anger than anyone should rightly experience), suggesting that because she was high she either consented and didn't remember or somehow lost the right to give her consent because she chose to do drugs. There many variations on that theme, but much of the victim-blaming boils down to this: "You were high, how do you know you didn't like it/didn't want it/didn't say yes? And even if you didn't, weren't you kinda asking for it?"

Of course, I know that this show takes place in the '50s, before the detailed conversation about consent and victim-blaming entered the conversation around rape. But this is a Ryan Murphy brainchild, and he's a fan of bringing modern social politics to all of his projects, regardless of the time period. This scene could have been handled more responsibly — even a moment of Penny clearly voicing some form of consent would be helpful. (That's what quick character flashback cuts are made for, folks.)

Ultimately, I think that this scene is supposed to show one thing: Penny had a good time with the freaks and now she regrets it because it looks bad. The town of Jupiter, Florida breeds hate and intolerance and Penny's choice could reflect poorly on her in the small minds of the prejudiced citizens. But perhaps next time AHS wants to find an opportunity to depict Forbidden Fruit: Freak Show Sex Edition, the writers should find a way to do it without skirting the line of rape and non-consent.