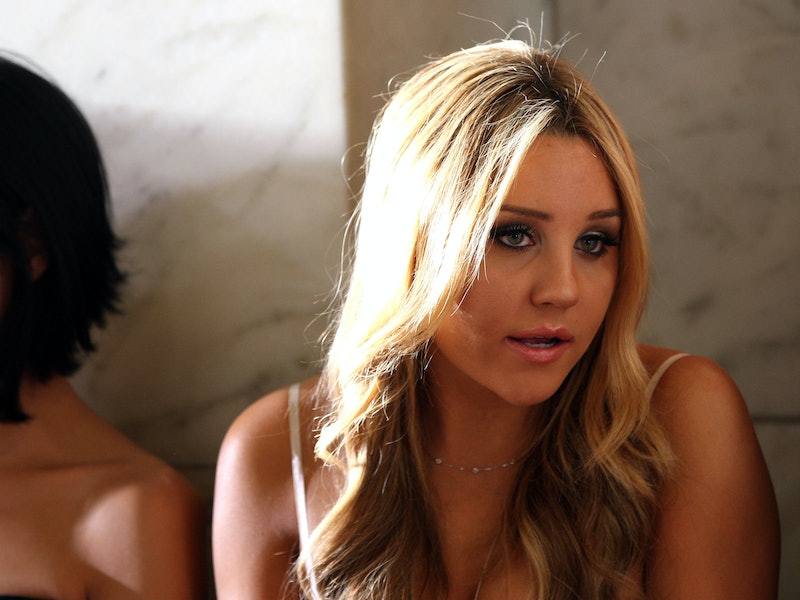 It appears that Amanda Bynes' return to Twitter was not just a one off. Or, at the very least, it can now be considered a two-off. To combat the rumors flying about her alleged actions and bizarre quotes, Bynes spoke out about the gossip on her Twitter in a move that it felt like she was forced into considering the amount of jokes and vitriol being sent her way. However, she is still tweeting and I'm not entirely sure that's a good thing. Late Wednesday night, Bynes confirmed that she is getting married to her boyfriend as one rumor had claimed, but the rest of her statements made it feel like Twitter might start doing her more harm than good again.

The Twitterverse, like the rest of the Internet, can be a very dark and offensive place. However, it's one of the many places that celebrities can use to connect with their fans on their own terms and say things in their own words, rather than through quotes that can be misinterpreted in interviews or through dispassionate official statements given through representatives. In that way, Twitter can be very positive... when used right. However, as celebrities who have ever tweeted something on a hot-button issue or something incredibly offensive can tell you, sometimes it doesn't even take all 140 characters to cause a scandal.

Bynes' confirmation was preceded by several tweets detailing her plans to sue the likes of In Touch Weekly and Star magazine for telling lies about her and claiming to have done interviews with her that she alleges never occurred. "They continue to write lies about me and it really hurts my feelings because they are calling me insane and I'm actually really smart," she says in one particularly heartbreaking tweet. The thing is, we are in the very unfortunate position of watching Bynes struggle with a mental illness and, because she is a public figure, that makes her the target of such ridicule that it is literally unbelievable. Every time she says something "crazy" or "bizarre", the world lines up to point fingers and laugh and pity her just because we watched her grow up on TV. As if she's not even a person, fully deserving of our respect and sympathy.

Back when Bynes was in the middle of her infamous downward spiral, Twitter became an enabler of her wild behavior. Her tweets ranged from strange to controversial to downright alarming and it couldn't have been any help to her to hear what fans and haters alike were tweeting to her in return. With Bynes returning to Twitter, there's a good chance that we might see that start to happen again. Twitter might turn from being a place for her to freely air her side of the story as rumor after rumor continues to paint her a certain way to a place for her to publicly document statements and thoughts that she might regret when she's feeling well again.

Twitter, like the rest of the Internet, is a place where nothing ever truly goes away and it's definitely not a healthy, safe place to recover for anyone who is going through anything. For most people, if they are going through a difficult time, it's best to shut off social media and focus on themselves. I think that's what Bynes needs to do here, for her own sake and for the sake of everyone supporting her and praying for her to recover from whatever she might be going through at the moment. She has said all that she needed to say. In fact, she's said more than she needed to say. The tabloids will continue to make up stories based on a single nugget of truth, but she doesn't owe it to them to pay them even a modicum of the attention that they are paying her.