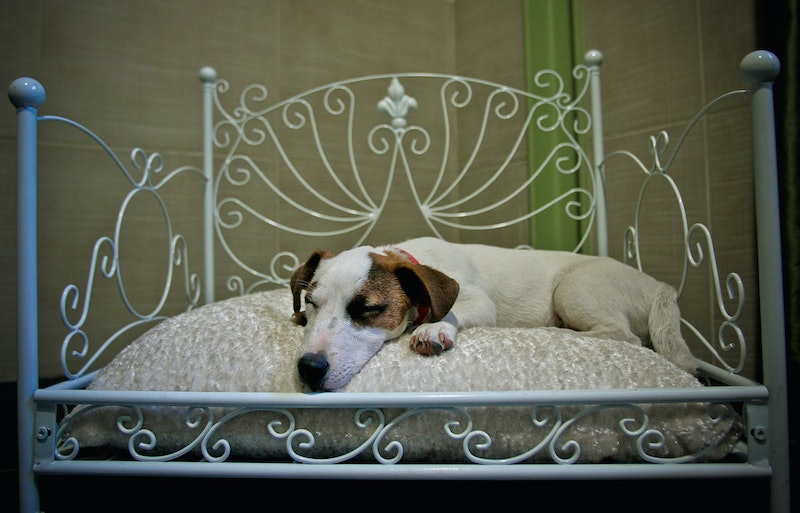 Think you love your pet? One English woman is giving dog-owners everywhere a run for their money by spoiling the hell out of her precious pup. According to the Daily Mail, Hayley Dexter has spent over $45,000 pampering her dog Betty with everything from her own bedroom to a Swarovski crystal-studded fork. Sounds like Betty is even more well-off than Karl Lagerfeld's famously adored kitty Coupette. And Coupette even has a line of accessories named after her.

Betty is a three year old Maltese who lives with the Dexters in Essex, England. Dexter is a 37-year-old woman who runs a five-star dog hotel called Essex Pooch Palace, so clearly she knows a thing or two about how to treat a puppy right. "She is very spoilt, a real princess - she has her own bedroom at the palace, and we bought her some custom-made furniture," Dexter told Mail. "My daughter even took her to her prom in a matching dress that we had designed and made especially for her."

Um, 'kaaaay. This is there the story gets really weird. Spending way too much money on a pet is a time-honored past timeof the wealthy. Just ask Paris Hilton. But taking that pet to the prom? In a custom gown? That borders on unhealthy obsession. I get that this family is clearly way more into dogs than I will ever be in to anything besides marathoning Twin Peaks on Netflix and drinking coffee. But, still. We have to draw a line somewhere. Dogs as prom dates is definitely on the "bizarre" side of that line. I mean, you didn't see me carrying a Betsey Johnson-clad Starbucks cup to my senior prom, now did you?

We want our pets to be happy, of course, so that they don't rebel and go wild á la Lux, the famous cat that prompted a 911 phone call. But maybe we keep them in our good graces by purchasing the nice brand of dog food and petting them a lot, not by building them a bedroom and taking them to prom. Just a suggestion. Do with that what you will, Dexter family. Let's just hope Betty doesn't get bored with her flashy toys.