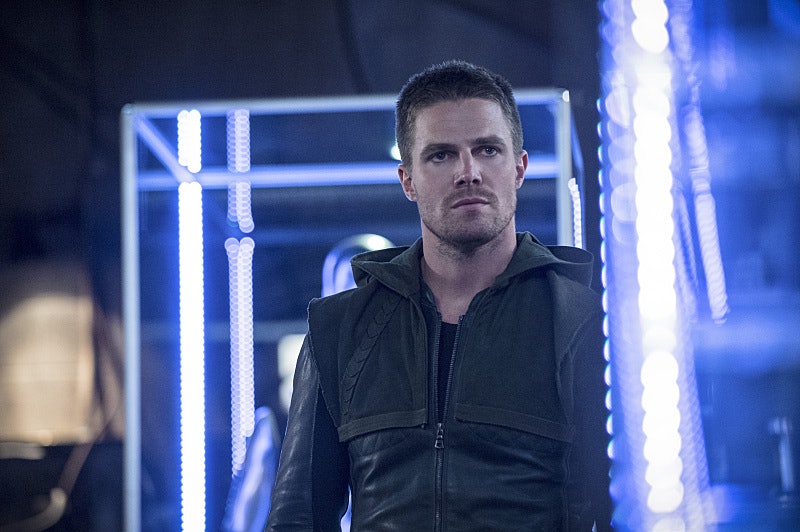 The CW's Arrow returned last week with a bang, as a fan-favorite character and Oliver ex-girlfriend Sara briefly returned to Starling City only to be shot down with arrows by the end of the Season 3 premiere. Wednesday's episode, "Sara," will deal with the aftermath, but there's so much more Oliver and the team will have to tackle besides this crushing loss. Many new faces will join the show, like Ray Palmer (who will one day become Atom), Mark Shaw (aka Manhunter), and Sara's possible killer Ra's al Ghul, who will appear in Arrow Season 3, Episode 4. That's right, the same Ra's al Ghul who terrorized Gotham City in Batman Begins and countless Batman comic books. So with the addition of such an iconic Caped Crusader-related villain, could Batman himself make an appearance on Arrow ?

It just doesn't seem likely at the moment. We have yet to hear any rumblings of Batman anywhere in Arrow. You would think that since Starling City has a vigilante superhero, we'd at least hear news somewhere about one in Gotham City as well. And the reason for Arrow's introduction of Ra's al Ghul is not so that Oliver and company can join forces with Batman to fight the evil together. At this year's San Diego Comic-Con, executive producer and writer Andrew Kreisberg, Ra's Al Ghul's appearance is meant to challenge Oliver in new ways.

"[Ra's] really speaks to the emotional theme of the season, which is, 'Can I be both the Arrow and Oliver Queen at the same time?' The villain says to Oliver, 'The reason you're not able to fully be the Arrow and do the things you should be doing is because you're still holding on to Oliver Queen. I've left my identity behind to full commit to my cause. If you did that, you could rise as high as I am,'" Kreisberg said.

This seems like a very similar reason to Ra's al Ghul's appearance in the Batman canon as well, like in 2005's Batman Begins. But again, that doesn't mean Batman will come to Starling City. Aside from the risk of viewers being more excited about Batman than Oliver and company, there's already Batman on TV thanks to FOX's new series Gotham. Sure, Bruce Wayne is still just a kid on the series, but it's filled with other Batman characters. And there are new Batman films being made — Batfleck anyone?

If he were to show up on Arrow, that might be Batman overload. Plus, the president of The CW commented early last year that "regarding is Batman going to make a trip to [Arrow’s] Starling City, they’re not in the same state," which appeared to be his way of saying that an appearance from the Caped Crusader would be unlikely. So sadly, we'll have to put the dream of seeing Batman and the Green Arrow fighting together on The CW's hit series aside. But we can always hope for more in the future. For now, let's focus on mourning the death of Sara and how that will shape Oliver and company's trajectory in Season 3.