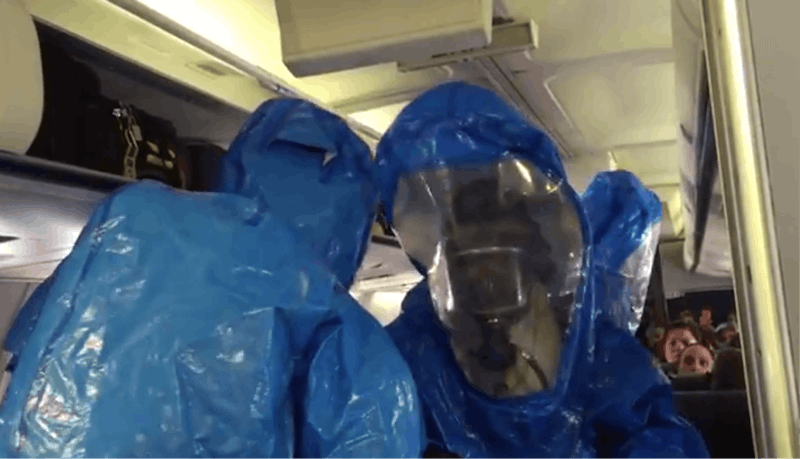 What would your first reaction be if you landed on an international flight and the flight attendant told you to stay in your seat because a passenger might have Ebola? Probably something along the lines of panic, call your parents, get right with the god of your choosing, try to convince the babe in the row behind you to tear one off in the lav, etc. But somehow this passenger on a US Airways flight from Philadelphia to Punta Cana swallowed down their panic long enough to roll video on the dramatic proceedings.

Throughout the video, you see other passengers whipping out their phones to record the medical team as they enter the aircraft, clad in what the flight attendant warns will “look like they’re in a little bubble machine.” There is nervous laughter and murmuring among other passengers, and their fear is understandable. Although Ebola isn’t nearly as contagious as people assume it is, it is still a rising epidemic with the potential to grow if not controlled; already it has claimed nearly 4,000 lives, including that of Eric Duncan in the US.

Containment procedures were triggered when the passenger in question sneezed while aboard the flight, and then claimed to have been in Africa and in contact with other Ebola patients. It was later confirmed as a hoax, as the passenger had never been to Africa, and did not have Ebola. He was just a massive pain in the ass with poor taste in jokes, another disease for which we have no known cure. Wouldn't it be nice if every such person was removed from flights? Anyway. What is most shocking about this video is the way the passengers handle the situation: As the potential Ebola carrier was led of the craft, a girl actually booed him. “Booo,” she said, “This guy’s been on my flight since Chicago, boooo!” Other people joined in with similar derogatory comments, which is unsettling to watch knowing that they had no idea that it was a hoax at the time. On the other hand, there is definitely a feeling, watching the passengers in this video, that they aren't super concerned. Like, they kinda get that this guy is just a jerk who is wasting everyone's time and being generally insensitive about a genuinely scary situation.

Two hours after the medical team led him off the craft, the man was screened and tested negatively for Ebola, and the other passengers were cleared to leave as well. It may have been a hassle, and lying about an Ebola threat is way out of line, but if nothing else, it’s a relief to see how seriously the threat is being taken. Airports and airline workers are taking precautions internationally to prevent the spread of Ebola. Even potential hoaxes have to be handled as thoroughly as possible. You can watch the medical team entering the aircraft here: