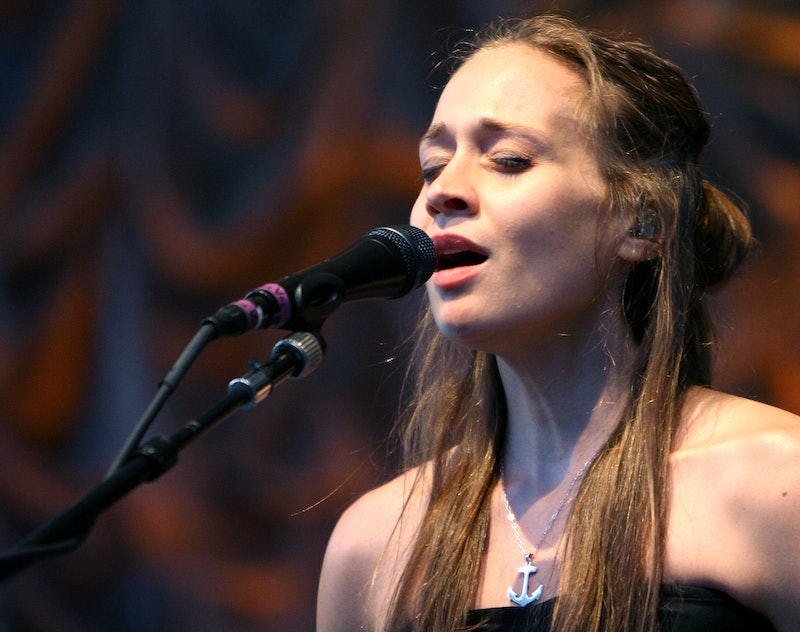 A show's theme song and opening credits can say a lot about the 30 or 60 minutes of TV that follow them. They are the audience's first glimpse into the world of that program, and they help to quickly establish a tone for the entire series. Good opening sequences can become little abstract films, artistically valuable in their own right. Showtime recently released The Affair theme song and opening credits, accompanied by Fiona Apple's new song, "Container." Full disclosure: I love almost all of Apple's work and I think she's a brilliant singer and songwriter, but I recognize that her style (and the style of The Affair's opening) is not for everyone.

That being said, here are a few reasons why you should get on board the Fiona Apple fan train. For starters, she won the Grammy for Best Female Rock Vocal Performance for "Criminal," a single off her very first album. Eighteen years later, her trademark deep, yearning vocals are still fully intact. Her most recent album, 2012's The Idler Wheel... was named Album of the Year by Time Magazine and NPR, and third-best by Pitchfork. Though Apple frequently accompanies herself on piano, and also uses guitar, drums, and other instruments on her albums, The Affair's theme song is almost entirely a cappella, allowing her powerful voice to stand alone.

Like a lot of Apple's songs, "Container" deals with themes of love and death (ya know, the simple stuff). The song tells the story of a woman who died while screaming into a canyon, setting off an avalanche that killed a man. That man's widow eventually went on to marry someone else and have a child, the "you" she's singing to. The story fits well with the plot of The Affair, which also features two intersecting couples and a murder (possibly) committed by one of the main characters. Using an original song by an indie darling singer-songwriter for the opening credits was a choice that another show used to great effect as well: Regina Spektor's "You've Got Time" for Orange is the New Black. Like Apple, Spektor has also not released any new music since 2012, apart from the theme song.

According to the Hollywood Reporter, The Affair 's showrunner Sarah Treem is such a big Apple fan that she sought the singer out for this project:

"Fiona Apple has been my favorite songwriter since I was 16. I am honored and humbled that she has chosen to lend her talent to our opening title sequence. If our show can approach one-tenth of the depth and complexity of her song, I'll be very happy."

Like the song itself, The Affair's opening credit sequence is also jarring and abstract. It doesn't feature any moments from the show itself, but is rather a pastiche of, among other things, menacing ocean and beach shots, sexy times between anonymous people, and home movie-style footage of a child playing in the sand. The sequence paired with Apple's song creates an eery feeling that alludes to the darker parts of the show, like the (potential) murder, which was not a focus of most earlier teases or trailers. Those waves look like they could drag you under.

The first episode of The Affair is available for free on Showtime.com, so you can get a sneak peak at where this daring new show is headed, and decide for yourself if you think "Container" is a good fit for the credits.