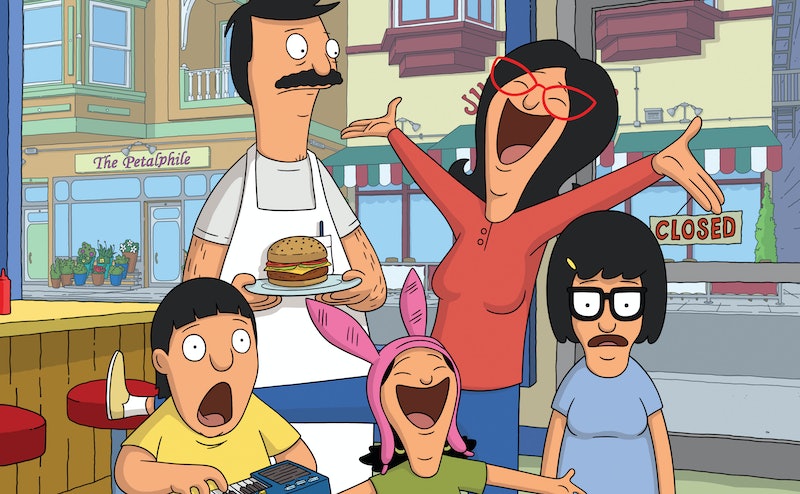 As it turns out, the internet was right about everyone's favorite burger-flipping family: Bob's Burgers is feminist, according to creator Loren Bouchard. We've always sort of known that Bob's Burgers was a feminist operation — how else does a magnificent creature like Tina Belcher come into being? And the maniacal Louise, for that matter? And hell, Linda too?

I caught up with the creator and cast of Bob's Burgers at New York Comic Con and asked the question I've been dying to figure out since Tina first voiced her love of butts. And while the "are you a feminist?" question seems to be making the rounds among celebrities, I couldn't help but wonder if this show, created long before the question became the thing to ask celebs, was created with the idea in mind. After all, feminism — when understood in its true definition and not the negative, man-hater one that some detractors have adopted — should apply to plenty of series.

"I would consider all the characters to be feminists," Bouchard offered without a moment of hesitation.

"I think we have the best female writers on staff and that really resonates too," says Linda voice actor John Roberts. "They're really smart women and even the men are very sensitive to women's needs in the writers' room ... I think that resonates a lot with all the female characters. They're smart, they think from the top of their heads."

"Yeah, not with their ding-dongs," adds Eugene Mirman, who voices Gene Belcher.

All joking aside, Bouchard made it clear that part of the reason that term "feminist" has been applied to some characters from Bob's Burgers, emphasis on Tina Belcher, is likely a favorable reaction to his main goal for all of his characters.

"It's nice that people recognize in the characters that we recognize," he says. "Ee certainly tried to give those characters a dimensionality and make them funny but grounded at the same time, but hopefully funny. It's really, really nice when they resonate."

Bouchard's willingness to openly embrace the term "feminist" is pretty exciting, coming from an Animation Domination staple on Fox. There often appears to be some fear among showrunners to ascribe the feminist label to their shows. Perhaps that's because that sets series up to "fail" adhering to feminist ideals. Perhaps it's because some segments of the audience might still have an aversion to the term (that's a whole other can of worms). But it's not often that creators are so willing to lay the term on so resolutely, which is why Bouchard's succinct answer is so perfect.

Being "feminist" simply means that a show participates in the worldwide movement to promote equal representation of the sexes. And why wouldn't anyone want to promote that through their work?