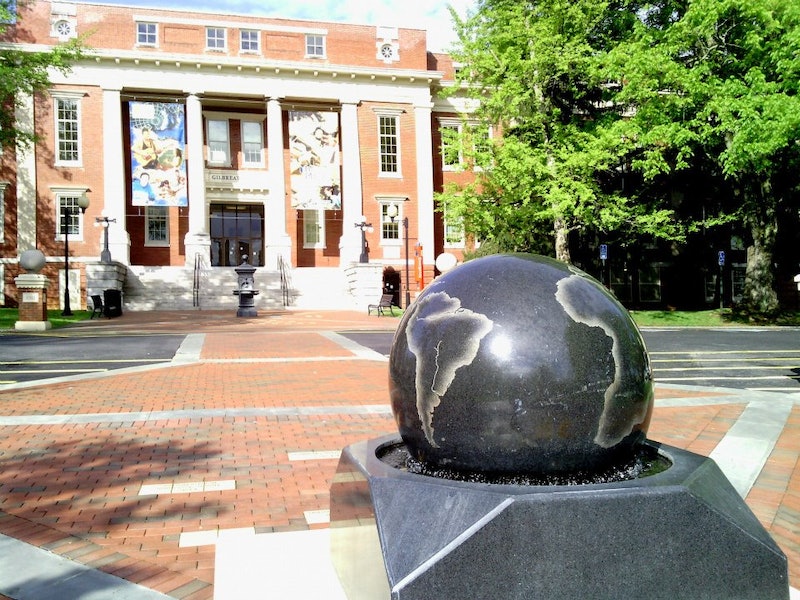 On Wednesday, I was shocked to learn that my alma mater, East Tennessee State University, refused to fund proposed Sex Week activities at the school. And to add insult to injury, the Student Government Association also passed a resolution dissuading all campus organizations from participating in Sex Week activities. One might be tempted to see this decision by a college in a rather conservative part of the country as something to be expected, but it is yet another incident of failure to address a very real sexual assault epidemic on college campuses that continues a tradition of politicizing students' safety.

The decision to turn down funding was made in the fallout of the “controversy” surrounding other sex weeks, such as Sex Week at Yale, Sex Week at UNM, and in particular, Sex Week at the University of Tennessee, during which state funding was also pulled and after which state legislators attempted to interfere in the distribution of student fees despite the fact that students on UT's campus approved of the activities. One ETSU SGA senator reportedly contacted state senator Stacy Campfield and concluded that ETSU would "get (their) hand slapped by legislature” if they were to fund the event, which was referred to as “dangerous” to ETSU’s funding, as well as controversial, due to its name. This framing is not only ridiculous, but it simply sweeps a very real issue under the rug. Pretending that sex and sexual assault does not happen on college campuses will not make it go away.

Sexual assault on college campuses is a serious problem. It’s estimated that 1 in 4 women will be a victim of a sexual assault sometime during her college career. Almost half of the women who were assaulted did not consider what happened to them to be rape. Over half of girls and over 3/4 of boys entering college believed that forced sex was acceptable "in certain situations." Despite these frightening statistics, advocates who work to expose this assault epidemic at our universities say that “schools are in denial about the scope of the problem.” Cutting off funding for events intended to bring light to the problem only ensures this denial will continue.Increasingly, discussions about sexual assault, while long overdue, have been occurring, and while institutions themselves have been slow to address the problem, this consciousness raising has sparked important dialogue amongst students themselves. Emma Sulkowicz is one example of students leading the way in bringing discussions about preventing sexual assault to the forefront. Sulkowicz, a student at Columbia university, has vowed to carry her mattress with her around campus wherever she goes — an apt literal representation of the emotional weight of sexual assault — until her rapist is expelled.

Sadly, despite students increasing awareness, sexual assault still occurs. In fact, reports of sexual assault at universities are on the rise, partially attributable to increased understanding of what sexual assault actually is. However, school administrations have a long way to go when it comes to educating about how to prevent sexual assault and promote healthy sexual relationships on campus. Part of that involves acknowledging and confronting the problem. Most schools, however, report zero sexual assaults to the Department of Education, a statistic that flies in the face of reality. ETSU has had two reports of sexual assault on campus this semester alone, and it was in this environment that the Student Government Association made their decision.

Sex Weeks are, in short, events on college campuses intended to raise awareness about issues of sexual health, consent, and healthy relationships, not bacchanalian celebrations of perversion. As Max Carwile, a friend of mine and student coordinator for Sex Week at ETSU explained to me, “There have been many different "Sex Weeks" around the country and it is a very powerful movement. Students all across the US are taking their health into their own hands and educating their peers.” Nevertheless, an environment of manufactured controversy hangs over these events wherever they are proposed, and this is unacceptable.

The real danger here is not Sex Week. The danger here is furthering the idea that sex is taboo and cannot be discussed in an open, frank manner. The danger is pretending that sex on college campuses does not exist. The danger is refusing to address issues like consent and boundaries when sexual assault is a reality for students not only at ETSU but at universities across the country. The danger is ensuring that kowtowing to the whims of a reactionary state legislature becomes precedent. Practically, yes, the SGA may not have been able to win had they challenged the state legislature, but it should have never been an issue in the first place, and the fact that they can essentially hold a sword over the head of a university's funding is horrifying, especially if they would do so in the name of preventing sexual education.

As a participant in Sex Week wishing to remain anonymous said, “The practical result of what they have done is that uni officials will determine the content of the (federally mandated) sexuality trainings.” Max Carwile added, “The SGA does not have the right to decide what is "too dangerous" to fund. They are supposed to make their decisions while being neutral on the content. I feel like there is a great deal of fearmongering going around to push people into doing what the administrators want and not what is best for the students.”

Regardless of the funding situation, Carwile and the other organizers of Sex Week have vowed that it will continue as planned. They have also set up a crowdfunding website to fund the events. Speaking as a former ETSU student, with friends on campus still, I want sex week to succeed. I feel it is incredibly important and, as Carwile also noted, “If we are too scared of the word to even have sex in the title of our event then I think that's a pretty large indicator that this event needs to happen.”

Because it is near and dear to my heart, this decision leaves me incredibly disappointed. I had hoped that my former university would take the lead in preventing sexual assault and ensuring a safe and educated sexual environment for its students. It’s not just ETSU though, it’s campuses everywhere that need to take the lead and listen to the needs of their students rather than succumb to political pressure or institutional inertia. Universities can prevent sexual assault, but if they refuse to fund educational events designed to that effect, they will continue to occur. When Sex Week is seen as more dangerous than legislators imposing their political beliefs on universities, or when the word sex is made out to be more of a controversy than sexual assault itself, we have a severe problem that needs addressing, and regrettably, East Tennessee has become a battleground.

In the meantime, I hope students like Carwile at all of our universities continue to do the work they do to make them a safe place. The movement against sexual assault on campus has, to this point, been largely student-led, by capable and outspoken individuals. However, it’s time for those in power to start listening to those voices and to make substantive changes in campus rape culture. Part of that process is education, and we can’t compromise that in the name of politics. Sexual health and preventing rape are not political issues – they are everyone’s issues and it’s time to confront them.

More like this
Chris Kaba's Family Continue Fight For Justice After Viewing Police Bodycam Footage
By Sophie McEvoy
Romance Authors Are Mobilizing For Reproductive Rights
By Natalia Perez-Gonzalez
Chelsea Clinton On The Best Advice She Ever Got From Her Mom
By Brianna Kovan
The Differences Between Kinks & Fetishes, Explained
By Lexi Inks
Get Even More From Bustle — Sign Up For The Newsletter