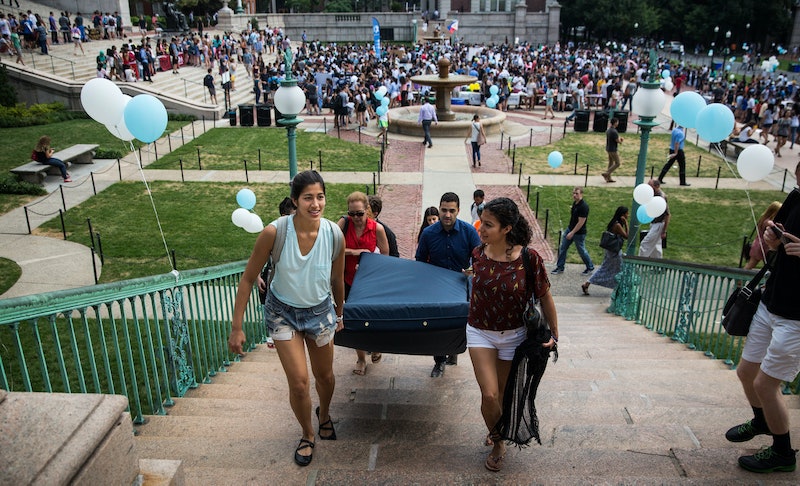 Colleges have a lot to answer for these days. It's not just one or two bro-y fraternities, it's campuses across the nation, across the world. All over, it seems, these supposedly safe learning havens — where young people congregate to segue into adulthood — are letting young women down. Nothing articulates this more clearly than the open letter from Emma Sulkowicz's parents to Columbia University published in the Columbia Spectator on Thursday.

You're probably familiar with Sulkowicz's story by now. A brave senior in the class of 2015 at Columbia University’s undergraduate school, she's shared her sexual assault story with the world by vowing to carry her mattress around until her rapist leaves the school, either by choice or by force. Her project, titled "Mattress Performance/Carry That Weight" has been a visual and powerful reminder of the struggles that face rape victims on college campuses — for whomever needs reminding.

In spite of the media spotlight on her project, Sulkowicz is still carrying that mattress around. Why? Because the school still hasn't done anything to punish the man who assaulted her. In fact, they've barely responded at all. And now her parents are taking a stand — they've penned an open letter to President Bollinger and the college's board of trustees to remind everyone that while it's great that their daughter's performance art has sparked a debate, the issue remains unresolved. And the blame lies squarely on Columbia's shoulders.

We do not want her recent celebrity to be a distraction from the fact that the University’s failure to place sanctions on the man she reported for rape, Jean-Paul Nungesser, CC ’15 (whose name has previously been published by Spectator), is a cause of her continued suffering. The investigation, hearing, and appeals process that followed her complaint to the University were painfully mishandled. We feel that they violated standards of impartiality, fairness, and serious attention to the facts of the case ... In retrospect, it’s hard to see the conduct of the investigation of our daughter’s complaint and the subsequent hearing as anything but a circus.

In the letter, the Sulkowicz's detail the school's (frankly shocking) response to their daughter's rape. Not only did they receive no support whatsoever from the university president, it seems Bollinger didn't even deign to respond to their appeal for help. And the hearing process itself, as they describe it, appears to have been shambolic at best: The investigator's report was allegedly full of factual errors, multiple postponements were granted to accommodate her rapist's summer vacation, and her request for appeal was granted by reconvening the exact same panel that had found her rapist "not responsible" before. All weird, problematic, and upsetting.

Sadly, this isn't surprising. Just this week, a Huffington Post analysis, which looked at 40 colleges across the country, found that only 30 percent of students found responsible in sexual assault cases are expelled. A slightly higher number — 47 percent — are suspended. Put differently, it means that 70 percent of acknowledged sexual attackers are left to wander free and happy around their universities, knowing that, in the one place meant to protect and teach each generation, they've gotten away with violating another person's body.

As the Sulkowicz's letter points out, it's not just about a one-time assault. Rape is an ongoing, exhausting battle for those who have experienced it. And the university's de-humanizing response to reports of sexual assault just make it worse and harder for others to speak up. They write:

We find it necessary to remind the University that rape is not merely an assault on the body, but an assault on the mind, and in particular, the will. Those who have withstood the violence of rape are often injured in their ability to assert themselves and to trust that they will be treated with humanity when they attempt to be heard ... It is clear that Columbia’s misunderstanding of the psychology of sexual assault survivors has contributed to abysmal rates of reporting, with even lower rates of those who continue to an investigation.

All this comes at a time when the nation is becoming increasingly aware of this pervasive and terrible problem. From government PSAs to California's "Yes Means Yes" bill to iPhone apps, there is a growing (albeit grudging) acknowledgment that what's happening is not okay, and needs to be rectified. Somehow, though, Columbia remains behind the curve. As the Sulkowiczs conclude:

In a few months, Emma and Paul will graduate. If Columbia does not act to expel him before then, their graduation will not relieve Columbia of the burden of this episode. Instead, in this important moment in the history of sexual assault on college campuses, Columbia will remain indelibly in the public mind as the university where good men and women did nothing.

Let's hope Columbia manages to take a stand, and make a change, before then.Images: Getty Images (3)