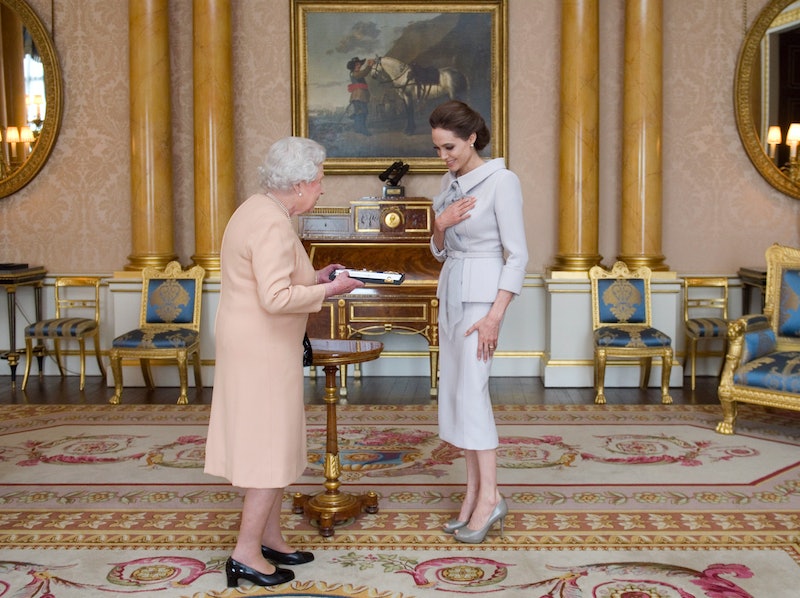 Do my eyes deceive me or...? Wait, they do deceive me; that's totally not Kate Middleton — it's Angelina Jolie! Did anyone else pull a total double take when they first saw this picture? What looks like a sweet moment between mother-in-law and daughter-in-law is actually a kickass lady accepting an honorary damehood from the Queen of England in recognition for the work she's done to combat sexual violence in war zones. Yeah, Angelina Jolie is a dame now.

Wow. I'll just let that sink in for a moment.

On a decidedly less salient note, can I just say that Jolie pulled a total style 360 on us? Gone are the evil Maleficent -inspired shoes, the body-conscious black leather dresses she's often associated with — not to mention her infamous leg-baring side-slit gowns. Suffice it to say, nowhere in her (admittedly far-reaching) style evolution will you find a royalty-worthy dove gray suit. Add an old money coiffure and pearl earrings and she's near-unrecognizable. Not that I'm complaining (about either facet of her style) — I just think that the magnitude of transformation is kind of amazing. I mean, did you ever think you would look at a picture of Angelina Jolie and mistake it for Kate Middleton? I think not.

Okay, let's see if it looks more like her closer up:

Nope! Still looks disarmingly like the Duchess of Cambridge, right down to the intense eye makeup (though, to be fair, Jolie's looks better).