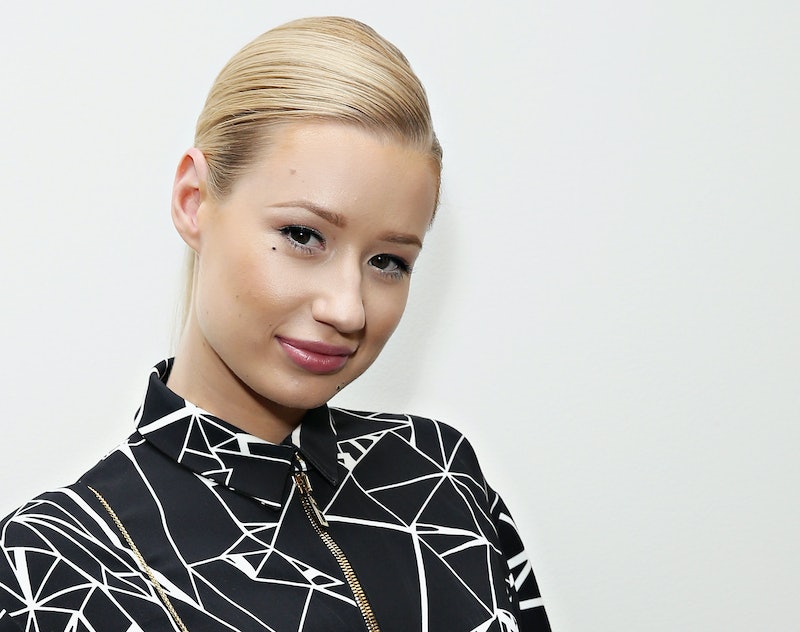 This falls somewhere between bizarre and disturbing on the lawsuit scale. For the past few months, Iggy Azalea has been involved in legal disputes with former boyfriend, Maurice Williams, over a variety of issues. First, she sued him for releasing her early records without her permission. Next, Williams tried to release a sex tape of Azalea and himself to an interested distributor, though she combated that with a cease and desist. Now, their legal situation has gotten even stranger. Allegedly, Williams is filing for divorce from Azalea even though they were never married. Um. What?

According to papers obtained by TMZ, Williams filed the papers in Texas to terminate what he is calling their common law marriage. If a man and woman live together and agree to be married and represent themselves to others as husband and wife, says TMZ, then they're considered legally married in Texas. In the papers, Williams requests that Azalea be barred from "selling various assets they accumulated during the marriage" — and a recognition of the marriage would make him a co-owner of her early music. An anonymous spokesperson for Azalea spoke to US Weekly about what a shameless money grab this is from Williams:

It's disappointing that this thief, felon, and fugitive is continuing to use the media to attack Iggy as part of his desperate and despicable attempt to keep himself in the press. Iggy's federal court complaint froze Mr. Williams' ability to trade on her fame by profiting from music he stole from her, so he has resorted to elevating his predatory relationship with a 17-year-old girl into a sham 'marriage' claim unsupported by any certificate or evidence.

His actions are confusing for... just about every reason possible, honestly. After all, Azalea was 17-going-on-18 years old when she was with Williams, so can she have been common law married to him? Then there's the fact that Azalea denies the two of them were ever married, common law or otherwise. It's more than a little obvious at this point that Williams wants a crumb of the financial pie that Azalea is enjoying and he has sunk to new, strange, and very desperate lows in order to get it. His claim that their "marriage" happened around September 2008 means that he's trying to collect what he thinks is his due from a relationship that happened six years ago.

Don't get me wrong. It is actually possible to get a divorce in a common law marriage, even if you never technically walked down the aisle together. But the idea of any judge recognizing a marriage based on a relationship that took place while one of the two was underage just sounds ridiculous. If fame is what Williams is looking for, then he's certainly going to get his five seconds of it until this scandal passes and he has to come up with a new way to harass Azalea. However, at this point — or at any point before this really — the better option would have been for him to let this go. It's been years since he and Azalea were together and trying to profit off of her when she's successful and in a loving relationship with someone else is just wrong.

As for Azalea, there's no reason that she should still have to be dealing with this man and any of the various legal issues he has forced her to bring against him. Hopefully, the judge will rule that the "marriage" was invalid and that will be the last we hear of Williams. It's time for both of them to be able to move on from this increasingly pointless feud and it's more than time for Williams to leave Azalea alone.