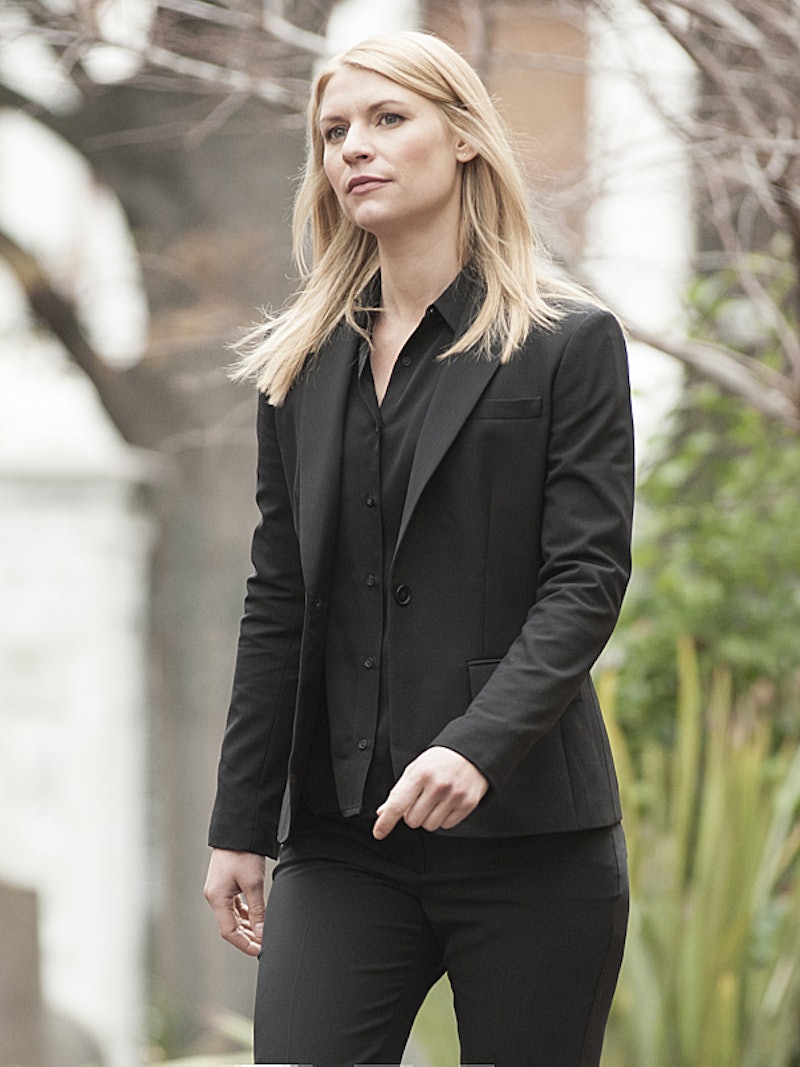 The episode set up the concept nicely in a scene showing Carrie coach the recently returned Fara Sherazi on how to recruit Aayan Ibrahim (AKA Haissam Haqqani's nephew/the lone survivor of the wedding bombing) as an asset. She instructs Fara to "make physical contact" by putting her hand on his arm, on his shoulder, etc: "It is a seduction, Fara," she explains, "There's just no way around it."

When Fara fails to recruit Aayan, though, it's time to pull out the big guns: Carrie lures him in by appealing to his doctorly side (groaning in pain in a restroom), and boy, does she make physical contact: she invades his personal space bubble like it's her job (which it is, I suppose), all whilst promising complete safety and a shining medical career. We don't get to hear his response, but it's clear — as Max awkwardly flirts to Fara earlier in the episode (get ready for Homeland's newest ship!), "How could he say no?"

But that's not all: When Carrie returns home victorious to her huge, empty apartment and sits down at her huge, empty dining room table for dinner (with a lot of Chardonnay, as usual), she gets a call from Quinn, and he has big news — apparently, the attack on Sandy was a set-up (something I called back in episode 1, by the way). Armed with this new information, she sees her opening with him, and she takes it: she pleads, she flatters, she begs — and it works.

Poor Quinn — the whole episode seemed like a big middle finger in his face: Almost every single person he comes into contact with tells him some form of "Duh dude, you're totally in love with Carrie Mathison." And if it's clear to Dar Adal, his CIA-sanctioned shrink, and his pseudo-girlfriend, you can bet it's clear to Carrie — and you can double-bet that she's going to take full advantage of it (Case in point: Brody). The show's played its cards close to the chest — most of us were working off the theory that Quinn loved Carrie, but Carrie was clueless... and that was a big mistake, because we never should assume Carrie's in the dark about anything.

So with that in mind, Carrie's the one who seems to be hurting Quinn the most. Because when she wheedles, wheedles, wheedles Quinn back to Islamabad with her, she knows exactly what havoc she's wreaking on him emotionally; she's working off the knowledge that he basically has to do what she says. Add in her heartwrenchingly platonic assertion that she loves him? Stick a fork in Quinn, because he is done.

When Carrie gets off the phone with Quinn, we see the same exhilarated grin we got from her when she successfully recruited Aayan — because whether it's putting the recruitment moves on a potential asset, or emotionally manipulating her biggest ally into coming back to her — she's damn good at it.