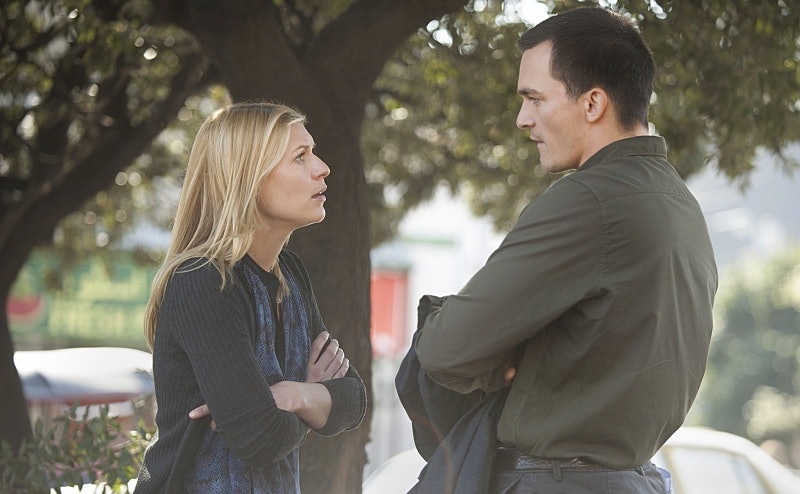 Oh, holy Saul's beard, Homeland! You did not hold back any punches during the Season 4 premiere. Although a lot went down in the two episodes on Oct. 5, the emotional struggles that Carrie Mathison and Peter Quinn were dealing with were the most captivating. There's clearly some tension going down between the pair and according to TVLine's Michael Ausiello, we'll be seeing Carrie and Quinn admit their feelings on Homeland sooner rather than later — soon as the Oct. 12 episode. "Quinn is forced to confront his true feelings for Carrie (and the collateral damage those feelings have incurred)," Ausiello wrote. "By the end of the hour, all eyes (and ears) will be on Carrie when she makes an impromptu confession that she may quickly regret."

Woah. Now I once said I would like to see Carrie and Quinn together. But after last week's doubleheader, I realized that both of our CIA friends should stay as far away from each other as possible for the time being. Carrie is removing herself from all feelings (being Drone Queen, staying away from her child, bombing an innocent wedding party), while Quinn is seriously struggling with the repercussions of his actions.

Showtime shared a clip of Season 4's third episode where Dar Adal confronts Quinn about the death of Sandy Bachman (Corey Stoll! You beautiful man, get off my TV!).

It's hard to tell whether Dar was saying those things about Quinn's feelings because he believed them or because he wanted to rile Quinn up. Based on his last line, it seems like the latter, but it's still a sore spot for Quinn. What complicates matters further is that the death of Sandy is one of the reasons Carrie is so hellbent on getting back to the Middle East. She knows there is something big happening with Sandy's informant, and she wants to get to the bottom of it. So in typical Carrie fashion, she blackmailed Lockhart and got herself a job as Islamabad’s new station chief. This is all while struggling with some extreme detachment from her baby and even considering drowning her.

So please excuse me if I'm worried about any "impromptu confession" that Carrie may give. Carrie — you need to back off! Quinn does not need this shit right now.

For the record, I think Carrie Mathison is one of the most fascinating characters — male or female — on television right now. I love how smart and flawed she is, and Claire Danes plays her masterfully. She's just a time bomb waiting to explode and Quinn — who seems to be suffering from post-traumatic stress disorder — should steer clear.

After being attacked by a violent mob and seeing Sandy beaten in front of his eyes, Quinn knows he needs the break. He wants to stay in the states — and apparently drink his face off. After getting drunk, Quinn slept with his building manager (you should read this excellent XOJane article about it). And instead of it just being a one-time thing (if Quinn was Carrie, he would have shown her the door), they went out to breakfast.

Part of me wanted the "landlady" to lose interest in Quinn after he almost smashed a man's face in with a napkin holder. I get it, many women would be happy to have a man fight for them, but there was an intensity that was clearly unhealthy. I thought it would be best for her to realize she didn't need to be involved in Quinn's turbulent emotions. The other part of me swooned a bit as I fell in love with Quinn's character even more and totally agreed with the woman's move to leave a note on his door.

And we definitely won't be seeing the last of her as showrunner Alex Gansa told Entertainment Weekly that Quinn's relationship with his landlady (let's hope she gets a name) is not over. "It’s an unlikely duo, and it speaks to Quinn’s need to comfort after what happened and his open-mindedness about who’s a suitable partner. You’ll see as we move into episode 3 that the relationship deepens."

We've never seen this side of Quinn and it's been fascinating to get a glimpse of what's under his typically controlled, icy exterior. And as much as I'd like him to stay state-side and get his shit together (and maybe enter a tentative relationship with the landlady), I doubt Homeland will give Quinn the rest he truly needs. Especially since Friend also said to Esquire about a Carrie-Quinn romance, "To be honest, while it's the obvious play, it doesn't feel very Homeland to me. But I'm not writing the shows. I've just noticed that they're very good at exploding the thing you think is going to be the big slow burner."

He makes a really excellent point that the show specializes in taking a storyline you think will take all season to deal with and then they tackle it in one of the first episodes (like in Season 2, Episode 4 when Carrie blew her cover and got Brody taken by the CIA!).

So that's probably how the show will be playing the attraction between Carrie and Quinn. My theory is the video of Sandy's death will cause a lot of scandal (since it appears that Quinn "chose" to save Carrie) and that she's going to say how much she needs him in Islamabad with her. And although Quinn has been trying to keep his distance, he may give in this time. But I think I'd prefer that he channel what he said to her at Sandy's funeral and give Carrie the big F-you.