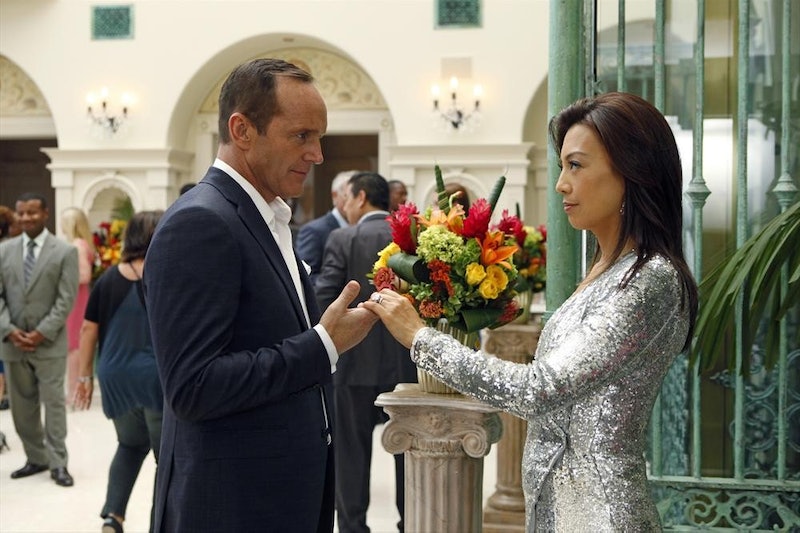 In an exciting preview for Tuesday night's episode of Marvel's Agents of S.H.I.E.L.D., we see Phil Coulson out and about on what appears to be his first mission back in the field. He's dressed to thrill, and he's got Agent Melinda May with him, who is dressed to kill. The two of them get real close, whisper to one another, and banter between tangoing like old friends (oh yeah, because they're tangoing. For a mission. Obviously). This is a side of them we really haven't seen over the past season, which might raise some questions from viewers. Is S.H.I.E.L.D. setting up a romantic arc for Coulson and May?

Just scratching the surface, we don't know a whole lot about the romantic pasts of these two. As we know from The Avengers, since everyone on the planet saw The Avengers — at least twice — Coulson was at one point smitten with a cellist. The conversation is very quick, and mostly happens between Coulson and Pepper Potts, but it's a nice moment where we realize that this agent is actually human (something Tony Stark refuses to acknowledge). There's also the Season 1 episode of S.H.I.E.L.D., where the team goes out to save this cellist, Audrey, but she and Coulson don't interact; she's still kept in the dark about his resurrection. That's the only real relationship we've seen Coulson go through in the time we've known him (since 2008's Iron Man). Guess he's a guy that keeps his private life very private.

May's the same way. Actually, we know next to nothing about May, and it appears she wants it that way. She was at one point married — no idea of his identity, literally could be anyone— and at one point she was sleeping with Ward, and yes, she's willing to hold a grudge against him forever.

Coulson and May have been friends since the Academy, which is referenced in the clip below (LOL at May taking a dance elective just to graduate early). But then their talk turns serious when May once again brings up the fact that Coulson is a little bit off his rocker. She's worried about him. She cares about him. But how much does she care about him? It sure appears their bond is a very deep friendship, and they do have a long history together.

Fury tasked May with babysitting Coulson for a reason. He needed someone Coulson would trust no matter what. Tuesday night's episode seems to go to great lengths setting up these two for an onscreen tango and a deeper dive into their backstory.

Before we break out a 'shipper flag and hoist it high above our heads, let's stop and think about them for a second. A real true relationship between Coulson and May would be... well, awkward. May's relationship with Ward was strictly physical. A relationship with Coulson couldn't be, since he's just so damn sweet and caring, which was proven once again last week when he brought groceries for Simmons. There's no way the two of them could carry on a strictly physical relationship without someone getting hurt. So if they're going to do it, the two of them have to fully commit. Coulson and May can't be friends with benefits. Can you even imagine Skye's face if she were to have ever stumbled upon that situation? Coulson's SO BIG in the Marvel Cinematic Universe that no one's going to half-ass a relationship for him. I could see a situation where we find out he and May had a romantic tryst way back when, but I wouldn't count on hearing about much else.