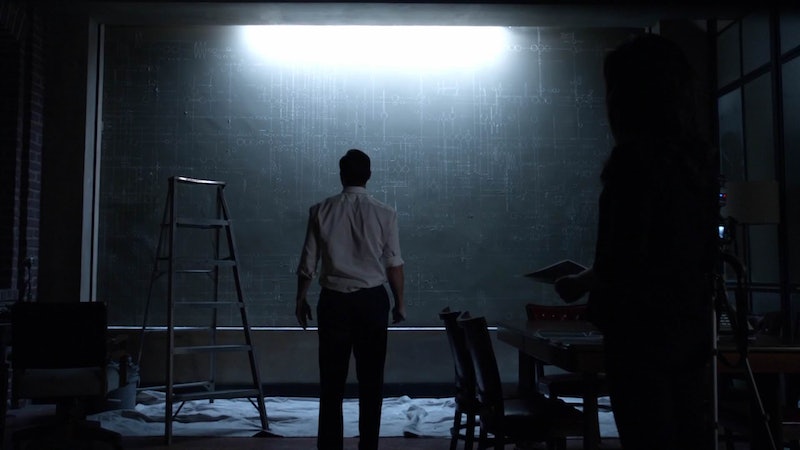 Last week's Agents of S.H.I.E.L.D. gave us another tease in a mystery they set up in last season's finale: what is Agent Coulson drawing? It's been part of the Agents of S.H.I.E.L.D. promotional campaign and everything, but finally appeared again in full weirdness during the episode "Heavy is the Hand." After absent-mindedly bending paperclips into the familiar shapes, Coulson gave in to an "episode" with encouragement from Agent May and some spooky music. She supervised and documented him as he compulsively carved the symbols into a stretch of material. Director Coulson has up until this point seemed relatively stable and capable. As it turns out, he's just been suppressing the urges.

Skye has been running the code and coming up empty in the search for answers. We have seen this pattern appear twice now on the mysterious alien obelisk. However, I don't think it's a code at all, or a map, or even a mechanical schematic. I think it's alien science, not alien language. There must be a storytelling reason that Agent Simmons has not been with the team since the "episodes" started. One that doesn't have to do with the possibility of Simmons being a Hydra agent. She's the one who can figure out what the carvings mean, not Skye. I think Coulson is drawing a genetic formula or some kind of molecular biology.

See the resemblence? This could still mean a number of things. It could be DNA. It could be alien elements. It could be the formula or substance used to create Inhumans — I'm just saying. But the more I look at those circles and lines, the more I think it represents biology. Plus, something that Fitz's imaginary version of Simmons said in the latest episode caught my attention. Remember, as Professor Dumbledore said, just because something is happening in your head doesn't mean it isn't real. Fitz was looking at the file for Carl Creel and his "absorbing man" abilities. He noted that they were taking a biochemical route to shut him down. Jemma/Fitz remarked that it was pointless because an "injected vector will never bind to his cellular membranes" and they couldn't stop him unless they could find a way to "destabilize the molecular structure of Creel's epidural cells," something that we eventually learned Fitz had already figured out how to do.

Now, I was more of an AP Lit girl myself, but I think I follow. What if GH-325 was an injected vector that could bind to cellular membranes, due to alien biology? It's a little meta to think that a drug would cause you to fantasize about the drug's own molecular structure, but if the drug came from the Kree, who are particularly interested in genetic perfection, it's at least plausible.

Return of the Obelisk

The wall wasn't the only place we saw this pattern in the episode. Somehow (I had to rewind and rewind to catch it) Raina ended up with the obelisk and took it to The Doctor, also known as Skye's Father, also known as Kyle MacLachlan. He's creepy, but not yet "Bill Paxton's evil turtleneck" creepy. Under Raina's touch, the obelisk glows gold instead of charcoal. Kyle MacLachlan insists that it "allowed" her to live and then demanded that Raina bring him Skye. I've already postulated that Raina has a bigger part to play than we realize. I can't wait to see her road tripping it with Skye. That's sure to be fun. But why would molecular biology appear on an obelisk?

I'm not sure, unless it's a particular point of pride or importance to whomever made the obelisk. Or it's the material makeup of the obelisk as well. That's the beauty of this being a biological formula. The same symbols can mean thousands of things. Coulson doesn't have to be drawing the exact same sequence found on the obelisk for them to be connected.

If one of the themes of the season is destiny and the origin of superpowers, this alien biology fits really well. Here's hoping we get more answers soon. I have a hunch that Simmons, the flesh and blood Simmons, will be able to provide some of those. It's entirely possible that Coulson already knows this has something to do with biology and sent Simmons to work undercover using Hydra resources. He was pretty dismissive of Skye when she talked about her findings, or lack thereof. Call me too trusting, but maybe he knows more than he's letting on. For now, let's just be happy that Coulson has Agent May on his side.