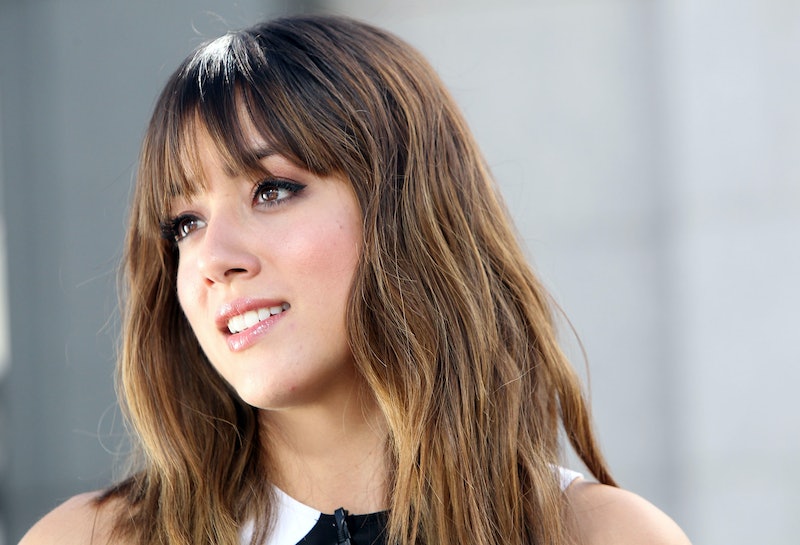 There's no doubt in my mind that one day, maybe even in our lifetime, Marvel will have taken over the world (with Disney's help, of course). They're already slowly inching their way towards that domination. With Marvel's Agents of S.H.I.E.L.D ., they've tied together comics, movies, and television. I think this is what Jack Donaghy was talking about when he said, "synergy." Synergy is right, you guys. As more and more questions are raised on the show, it's easy to now look to the the ever expanding Marvel Cinematic Universe for answers. That's exactly where we need to look to figure out the identity of Skye's mom, a still lingering question from the first season. And not only just who she is, but what she is.

The identity of Skye's father has been revealed... sort of. Kyle MacLachlan will be playing her father, but who he actually is remains anyone's guess. It's sort of hard to Google Marvel Character + Bloody Hand + what was that? and get a ton of answers. We know that Skye's birth, early childhood, and a better part of her adolescence are shrouded in mystery, redacted by someone very high up at S.H.I.E.L.D. We know that at one point Skye was in China, and then those protecting he were killed by "monsters." Those "monsters" happened to be her parents. They're probably not literal monsters, as in the sense that they're things that go bump in the night, but really, really bad people.

Considering the questions and secrecy surrounding her, it's easy to assume that Skye's actually an Inhuman. It would make complete sense, actually. The easiest way to describe an Inhuman is to say that they're a human that was genetically altered by the Kree. Or, the blue people we saw this summer in Guardians of the Galaxy. OR, what was likely featured last season on S.H.I.E.L.D. — that saved Coulson and Skye — that Chloe Bennet (accidentally) confirmed was Kree at Paley Fest.

There are actually a few different Inhumans who could be Skye's parents. Leader of the Inhumans, Black Bolt had a child with other Inhuman, Medusa, and it was frowned on by Genetic Council because Black Bolt was so powerful his lineage shouldn't be passed on. Their child was then hidden away by the council and Black Bolt got mad. Hey, kinda like how Skye was hidden away!

There's also Crystal, the Inhuman, who (just follow me with this, OK?) married Quicksilver, who is the son of Magneto, and they had a daughter named Luna (Luna? Skye?). But then Crystal married Roan the Accuser in sort of an old-fashioned arranged marriage type thing. Crystal and Roan were supposed to show the alliance between Inhumans and Kree. Skye did not react to the Kree's GH-352 when it was injected into her to save her life, so it's safe to say she's either part Kree, or already has some of it running through her. Could she be the daughter of these two, and maybe the only one who can decipher Coulson's crazy scribbles?

The thing about most Inhumans is that they're not monsters. It's doubtful they would destroy an entire village. But the show could be taking liberties to create and merge characters together, to form their own sort of little world inside of the bigger MCU. In case you missed this information over the summer, as Collider revealed, Marvel is reportedly moving forward with an Inhumans movie. What better way to start actually moving forward with that idea then to slowly plant little plotlines on TV? What S.H.I.E.L.D. did with Captain America this past summer was fantastic. They'd be foolish not to keep those those plot crossovers up.

My educated Marvel guess? Crystal is Skye's mom. It would make the most sense (even though it still only makes like, 40 percent sense, but I'll trust Camp Whedon to figure it out for us). Crystal's bridged the gap between Inhumans and other races before. This parentage would easily bridge S.H.I.E.L.D. to both this summer's Guardians of the Galaxy, and the possible Inhumans of the future. Synergy at its finest.