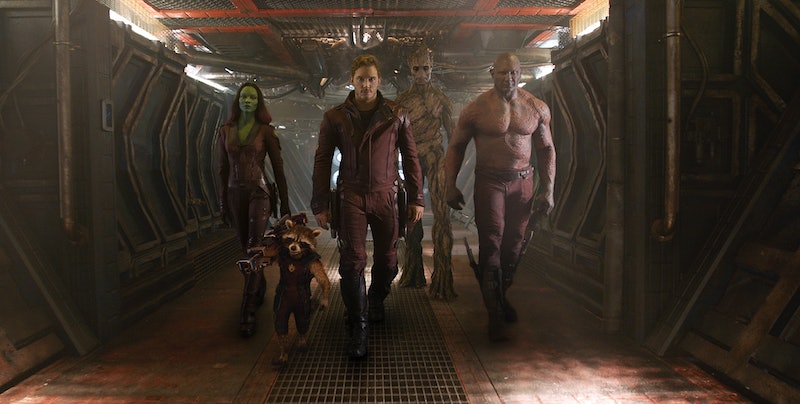 The comic book movie craze can no longer be ignored, guys — and for the franchises that Disney has a hand in, there is no sign of slowing down yet. Not only is there a Guardians of The Galaxy sequel in the works, but now, Star Lord & co are being reworked for the younger crowd. Starting in 2015, Guardians is spinning off into an animated series on Disney XD.

Although Marvel's definitely not a stranger to animated incarnations of their characters, this will be the first time Guardians has ever become a series in this way. And, um, it makes me a little nervous. Far be it from me to call myself a comic book devotee, but after witnessing my boyfriend's outrage when Gotham premiered with so many inaccuracies in the Batman universe, I can tell that there are probably a lot of people out there who aren't going to take it well if and when Disney XD gets something wrong. After all, when big screen blockbusters turn into animated series, something is going to get lost in translation, even with a studio as experienced as Disney.

But there are other movies that would make awesome animated series... although maybe it's just more fun to think about than actually see happen.

The Fault in Our Stars

So this might be the absolute saddest animated series in history, but stay with me on this one. In the animated series, Hazel and Gus are alive, healthy, and using clay as toothpaste. See? We all get a second chance at a happily ever after.

Okay, so this is already animated, which makes it even easier. I just wouldn't want it to turn into The Little Mermaid animated series, which was nowhere near as awesome as the original movie. Maybe I take it back. Maybe I don't want Frozen as a TV show. A second movie would be pretty good, though.

Warning: This show will probably give your children nightmares. And I do request that Ben Affleck reprise his original role.

The colors of the capitol are perfect for animation, and I would love to see a cartoony Effie, whose outfits and hairstyles would obviously be that much more outrageous. Since Hunger Games is, by nature, so incredibly violent, the animation would probably tone it down a bit for younger viewers... or, you know, traumatize them forever. It's a chance I'm willing to take.