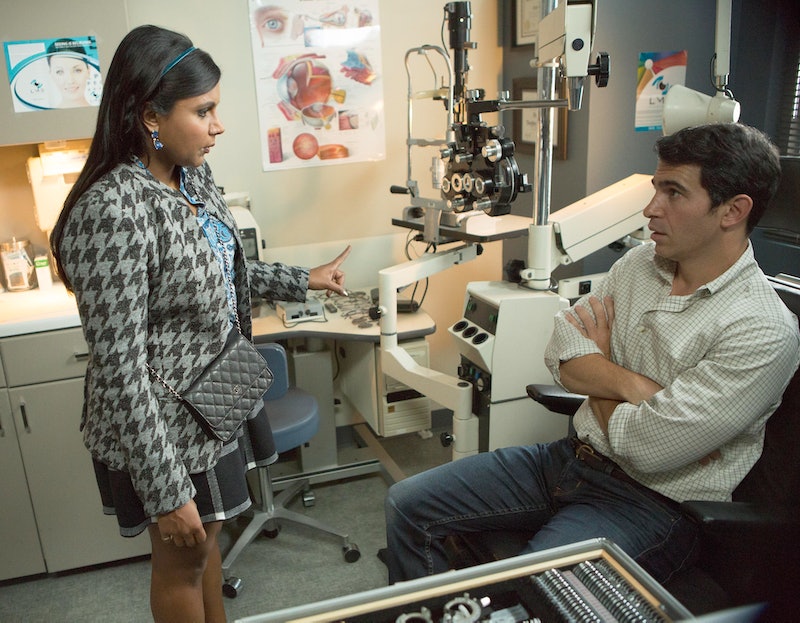 Last week's episode of The Mindy Project was admittedly uncomfortable. While having sex with Mindy, Danny "slips" the implication that there's a moment of the beginnings of "accidental" anal sex. The episode then goes on to have Mindy Lahiri panicking about the kind of sex Danny wants before finally talking to her boyfriend and learning the truth: He was just "trying something." Saturday night, when I attended showrunner Kaling's New Yorker Festival talk, I expected fans to ask her to be their best friend or ask what it's like be a total boss in the TV world, but things took a turn when Kaling had to answer for this plot that rocked more than a few of her fans.

After a bevy of fans gushing over Kaling, one woman asked her what her response was to the negative reaction fans had to the "Slip" episode and Kaling responded with this:

I would say this, I think I disagree with you. And I think that you know Danny — they're dating — he is a wonderful character, a wish fulfillment character, and he loves Mindy and they have a relationship that is very understanding with each other. And he tried something because he was trying to see what he could get away with. But I don’t think that, in that relationship, that Mindy’s reaction to it was like ‘I feel violated.’ It was ‘Hey man, run that by me.’ I think that, we have to, like, in knowing what their relationship is and knowing that the way it was portrayed it wasn’t something that made her feel unsafe or degraded, that it was like you can love someone and be in a relationship with them when you’re both consenting adults and people can try things and you can be like 'I busted you on that, my friend.' It was not an issue of sexual unsafety. But I understood people felt that way and I disagree, but I am sorry that people felt that way.

And I also wanted to say to that, in a larger sense, we have this card — this red card — of stirring fear in men about certain things. And I think if you think about the character, I was sad about that because I thought, 'Is that a situation where we want to use that card for that?' And I felt that it bummed me out a little bit ... There was no sexual peril in there; it was not a situation where she felt unsafe or was treated as, or was objectified. She just was startled in a comedy place and that's where comedy lives, in these uncomfortable places. But I was sad about that.

I, too, like spontaneity in sex, but when trying for big-ticket items like Danny was, some dialog is really, really important. Experiments have been attempted in the past without my express permission on a few occasions, and while I didn't spend days going nuts over it, I definitely let the men in question know it was not okay and asked that, in the future, they use their words and ask. Like Mindy, I didn't feel degraded, I just felt like these dudes needed a little consent school. Problem solved, right? Unfortunately, on the show the Mindy-Danny dialog continued and unraveled after that.

After Mindy asks him to "run it by her," she changes her mind, suggesting that consent for specific acts between two people in a relationship who've consented to a blanket sexual encounter isn't that big of a deal. "Asking sucks," Mindy says after their conversation has concluded, suggesting that the asking part ruins the sexiness of the whole encounter. Big mistake. Huge.

This raised red flags with me, and with a few of Kaling's other devotees on Twitter:

Look, I think I get what Kaling and her writers were really trying to say here and I get why hearing dissent was upsetting. I think she was trying to say that keeping things spontaneous in the bedroom is sexy and that in a couple, you often get into a comfortable and often wordless sexual pattern. But the problem is that, the definition of consent versus non-consent is a really, really big deal. And the even bigger problem is that non-consent and rape aren't just an issue for sex outside of coupledom and this scene seems to imply that if you're in love and you're happy, consent is not an issue. That's simply incorrect.

Still, I don't think what Danny did is rape and I don't think Mindy's detractors were saying that. I think he tried something and Mindy stopped it. He respected that she wanted to stop, and then they went on to have that perplexing conversation. Mindy and Danny are in a loving, supportive relationship (though, it's taking a lot for me to ignore his comments about loving her ass getting smaller at the gym) and they can have sex however they'd like, but they're on TV and their conversations are, in a way, helping to set precedents. And the big problem here is that the language they used squashed the idea that consent between two people in a committed relationship is necessary and important. And consent belongs in a committed relationship and is definitely both of those things.