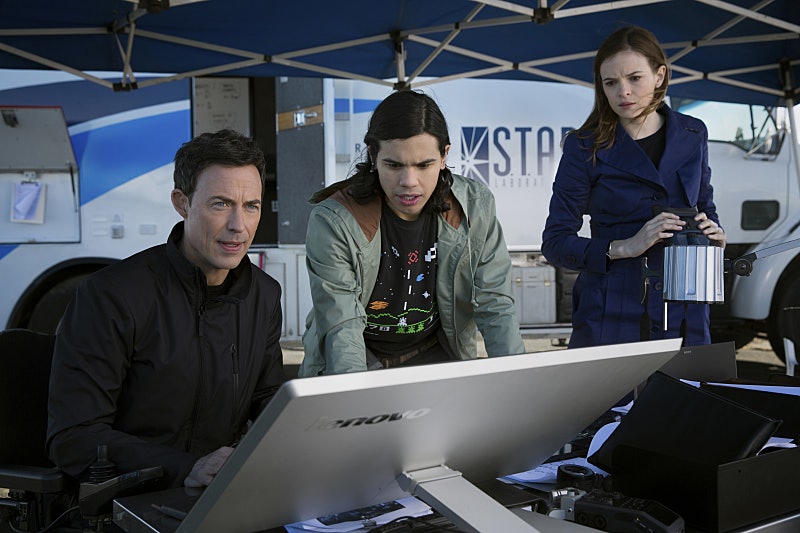 Last Tuesday night I had the strangest feeling of deja-vu while watching The Flash . Barry Allen woke up from a coma and was greeted by two young and chipper scientists that seemed so familiar to me. I couldn't place it, and then it hit me like a guy running really, really fast. Scientists Caitlin Snow and Cisco Ramon are the DC Comics version of FitzSimmons from Marvel's Agents of S.H.I.E.L.D. They quip. They experiment. They're exactly alike. I love a science duo —they actually remind me a bit of The Avengers' Bruce Banner and Tony Stark too. Both scientists, but in complementary disciplines. I wonder if we've stumbled upon a new trope altogether that deals strictly with how characters who are scientists must be in a team. The characters both made their first appearance on an episode of The CW's Arrow and palled around with Felicity last spring. However, I think the Tuesday night time slot solidified the FitzSimmons comparison in my brain.

But one big difference between the two sets is their emotional well-being. In character pairs like this, there is usually a logical person and an emotional person. A head and a heart. Think about Ron and Hermione, or Booth and Bones. This doesn't even need to be a romantic 'ship to be applicable. With S.H.I.E.L.D.'s FitzSimmons, Leo is the head and Jemma is the heart. It's the opposite on The Flash. Caitlin Snow seems somewhat cold. She's the logical one. Cisco Ramon, on the other hand, is warm and endearing. He's the heart who adds lightning bolts to a suit to make it cool.

But that's one of very few differences between the two teams. Now let's focus on everything that makes these lovable dorks so similar.

I wear T-shirts, she's cheer captain, and I'm... just kidding. Anyway, Cisco is the engineer of the duo. Fitz is also an engineer, though he's not operating at full capacity right now. Give it time. Granted, they both draw inspiration from other "gadget guys" such as James Bond's Q and Batman's Lucius Fox. They are the comic relief geeks. The clowns, if this were a Shakespearean drama. Fitz and Ramon even dress alike. I doubt you'll find the stodgy Fitz wearing a T-shirt any time soon, but both guys rock a cardigan pretty hard. It gets chilly in the lab sometimes!

Caitlin Snow is a bio-engineer. Jemma Simmons is a bio-chemist. Slightly different, though it appears that Barry Allen is the chemist of the group with his forensic expertise. As great as it is to see women in STEM careers, it's interesting to me that both of the girls in these partnerships are less with the building and more with the researching and analyzing. I'm glad that on The Flash, the female counterpart does at least some of the engineering as well. She and Simmons are still a lot alike. They are both career-minded ladies. They have mysterious pasts. Caitlin Snow kind of looks and dresses like Agent Simmons too.

Does The Flash have any good characters, in the heroic sense of the word? Grant Gustin is so charming, but this show is bringing me down. As it turns out, Cisco Ramon is also known as the DC supervillain "Vibe" (cool name) and Caitlin Snow is "Killer Frost." They are both associated with the superhero "Firestorm," who will be joining the show (played by Robbie Amell) allegedly as Caitlin's fiancé that she believed to be dead. Who knows what The Flash will change from the comics, but that's good news for now.

How does this relate to FitzSimmons? Not quite as well, but we were lead to believe that Agent Simmons was Hydra last week. Don't freak out, she's going undercover. Though she is at risk of being brainwashed, which could turn her into a truly loyal Hydra agent. Even my sweet Leopold Fitz showed his darker side in the episode during his "talk" with Grant Ward. How scary was that? Clearly both shows aren't afraid to deal with shades of grey in their scientist characters, and it'll be interesting to see where all four of them go.