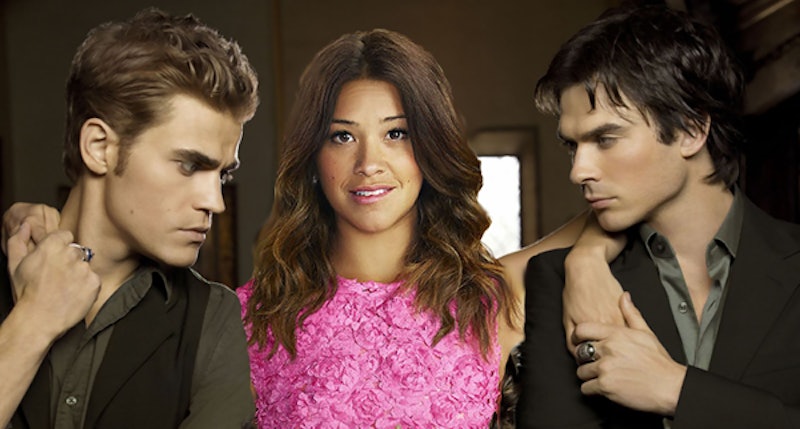 On Monday night, Jane the Virgin will premiere on the CW and throw us all into an utterly ridiculous plot that somehow works from the strength of the cast and the story. It's like nothing else on the CW channel, which is mainly known for its teen and supernatural shows. It's like nothing else at all, really. Loosely based on a Venezuelan telenovela called Juana la Virgen, it tells the story of Jane Villanueva, a religious girl who has never had sex but finds herself suddenly pregnant when her doctor accidentally artificially inseminates her. It's got a diverse cast behind the characters and the kind of plot you have to see to believe.

Naturally, I'm already thinking of Jane the Virgin's crossover appeal. After all, many of the shows on the CW have a diversity problem, whether it's not enough people of color in the main cast or not enough women. A crossover with Jane the Virgin would fix both those problems. Besides, it's fun to think of the ways that the plot of the show would sound more, or less, silly when you combine it with the plots of these seven CW shows. By the time you're done, getting accidentally artificially inseminated might sound almost normal compared to...

Jane Villanueva is actually a resident of Star City. Oliver Queen hears of her plight and tracks down the doctor who artificially inseminated her by mistake, holding an arrow to his face and telling him that he has failed this city. I'm just saying it would be a lot faster than the malpractice suit. That would scare him straight.

Jane Villanueva discovers that the biological father of her child is actually Stefan Salvatore, so she travels to Mystic Falls in order to confront him about his centuries old sperm. Damon falls in love with her from beyond the veil and once again the Salvatore brothers find themselves in a love triangle over the same girl.

Jane the Virgin meets The Flash

On her way home from the doctor's office, Jane Villanueva is struck by lightning. The bolt not only makes her pregnant; it also gives her and her baby superpowers. Not only is she the new Flash, but her unborn baby will be the next Flash. Sorry Barry Allen. Then again, she could just always go back in time to stop herself from going to that fateful doctor's appointment, thus undoing this timeline.

Jane the Virgin meets The Originals

Hayley isn't the only one who's pregnant with the first hybrid baby. As it turns out, Klaus also had some sperm on layaway just in case he ever needed to build a family the non-murderous way. Poor Jane Villanueva finds herself having to travel down to New Orleans in order to confront the sociopath who is the biological father of her child... and the vampires and witches he's at war against.

Can Jane Villanueva hide her mysterious pregnancy while navigating the scary and dangerous political games of the French court? Is the father Bash or Francis? Did they even have sperm banks back in the 1500s? In a Jane the Virgin meets Reign cross-over, I guess we'd find out eventually.

After a medical accident renders her pregnant even though she's never had sex, Jane Villanueva and her family move from Miami to Bluebell, Alabama. There, they meet a kooky cast of characters that almost make her sudden pregnancy from accidental artificial insemination seem normal. And also Wade's abs.

Speaking as a Supernatural fan, this show has a notorious problem with women and, you know, having any on the show that don't die. When Jane Villanueva gets pregnant even though she's never had sex, Sam and Dean roll into town to investigate this supernatural mystery. They then decide to take her on the road with them because her child is the Antichrist or something. It's that kind of show.