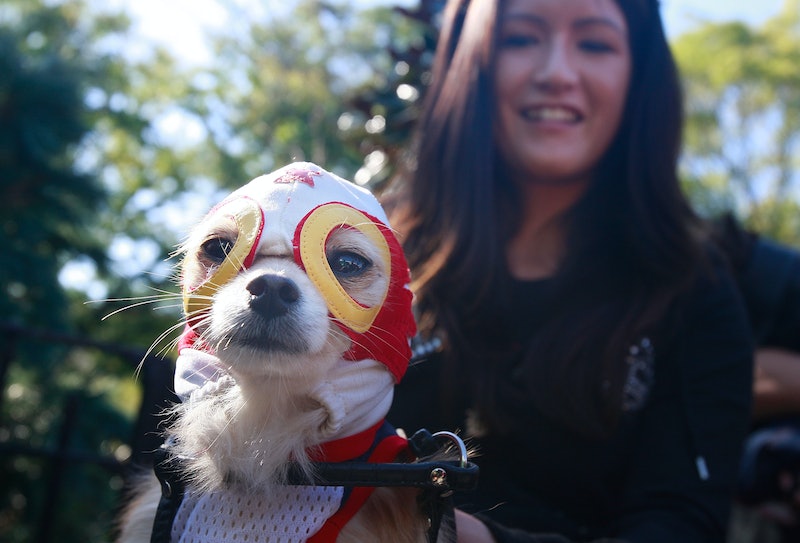 I think we can all agree that the best part of Halloween is dressing up. Okay, okay, maybe it's shamelessly eating candy. But dressing up is a close second. And what's better than simply dressing up? Coordinating outfits, of course. I mean, how many times have you gotten together with a girlfriend, but called her beforehand just to make sure that, yes, she is also wearing a dress today? (And heels, because anything other than your natural height-difference is just weird?) Halloween is no exception. Except, perhaps, with whom you choose to coordinate costumes. There's the group-of-friends costumes, couples costumes, and the best friends costumes. Not those best friends; I mean your real best friend. Your four-legged best friend.

I've never really been one to dress up my pooch, but after seeing that spider dog video (yeah you know the one), I have decided I can't rule it out this year. We already know that cats aren't really into costumes, but canines tend to be much more open to the idea. Plus, a pup in costume is just too cute to resist — even as a giant, eight-legged terror. And as if we don't spend enough time together everyday, a little extra bonding over matching costumes can't hurt. Bonus: The size difference between you and your furry friend also allows for a greater variety of costume pairings than if you were to coordinate with another person. Here are seven ideas to get you started:

Pair any kind of peasant blouse and skirt with a spider costume for your pup to be the classic children's rhyme.

I know, I know. Not exactly historically accurate. But they still look cute together, right?

4. Definitely Not In Kansas Anymore

Dorothy and Toto roles are obvious and overdone. Switch it up and take on another role to let your pup be the star of the show.

Don't forget a condiment for your wiener!

Pair some fisherman's gear with a fish costume for your pet and take her out to show off your best catch. Tip: Adding a hook decoration to the end of your pet's leash will help it blend into your costume while also allowing you to keep an eye on your furry-turned-fishy friend.

What puppy wouldn't look adorable dressed up as the White Rabbit from Alice in Wonderland? Just make sure she doesn't run away from you all night because she thinks she's late for something.