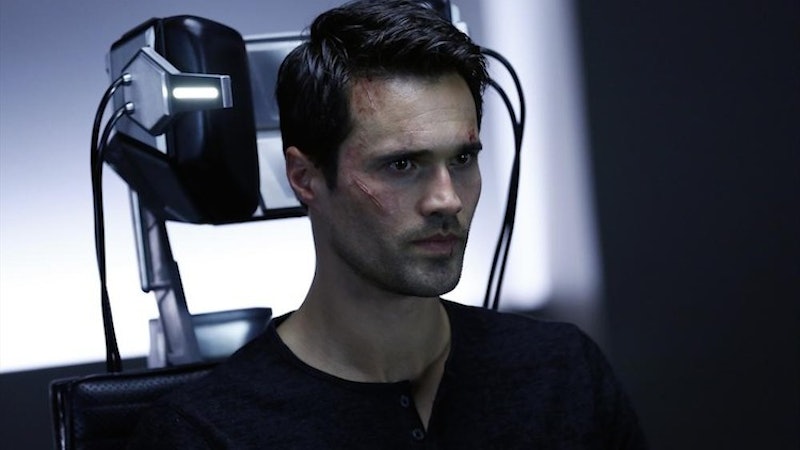 Perhaps the biggest question looming over Season 2 of ABC's Marvel's Agents Of S.H.I.E.L.D. — other than how the super-spy organization will reassemble itself in the wake of Hydra's hostile takeover — is whether or not Agent Grant Ward can redeem himself. In the latter half of the first season, it was revealed that Ward was actually an undercover Hydra agent working with the deranged John Garrett to bring down Coulson and S.H.I.E.L.D. from the inside. The exposure of his betrayal and the game-changing ramifications that brought to the group without question reinvigorated the sagging show... but it's still sad that Ward, who was gradually starting to warm up his chilly facade and fulfill an indispensable big-brother role to Coulson's team, was a fraud the whole time.

In the Season 1 episode "Turn, Turn, Turn" Ward's true allegiance became apparent when he shot Senior Agent Victoria Hand in the stomach — and then twice more in the head — all to help the evil Garrett escape S.H.I.E.L.D. custody. In the season finale, he attempted to murder Agents Fitz and Simmons when he sent them plummeting to the bottom of the ocean in a locked box, and tried to kill Agent May in hand-to-hand combat. Thankfully, all three managed to survive his homicidal efforts, but not before irreparable damage was done to their (and our) opinion of their former colleague.

Showrunners Jed Whedon and Maurissa Tancharoen have their work cut out for them if they intend to redeem Agent Ward — especially since it was revealed in the most recent episode that Hydra did not, in fact, brainwash him. That means he's not a programmed robot that can be turned back to good with the flick of a switch. His evil streak runs much deeper than that, which means Whedon and Tancharoen will likely be delving into the psychological trauma of his childhood.

In Season 1, we learned that Ward had an abusive older brother who forced him to beat up their younger brother. In one memorable instance, the eldest Ward pushed their brother into a well and refused to let Grant save him. We know that this disturbing past will be coming back to haunt Agent Ward, since actor Tim DeKay ( White Collar ) has been cast as his psychotic brother Christian. (Christian is also a Senator, and in Season 2's second episode, General Talbot mentioned that he was operating under orders of a "senator with deep pockets." Coincidence?) If S.H.I.E.L.D. is bringing on Christian to help explain "why" Grant is evil, Agent Ward would be far from the first villainous Joss Whedon creation to get a shot at redemption — just look at Angel from Buffy The Vampire Slayer, who flip-flopped so often between his "good" persona and the evil Angelus it was dizzying.

Ward's portayer, Brett Dalton, isn't giving anything away about the fate of his character, but he admitted to zap2it that Garrett's death paves the way for some serious self-reflection: "For a good portion of his life Garrett was the father figure in his life, and he was a very loyal follower of this man and would do everything that he said. Now he needs to answer the question of who is he without this man." The loss of that corrupting father figure and the chance to confront his traumatic past head-on suggest that Ward is, at the very least, starting to tip-toe down the path of redemption.

But all this discussion about Ward raises another, tougher question. Forget whether he can be redeemed — should Ward be redeemed? My gut reaction is, of course, yes. I think of him back in Season 1 bonding with Skye, teasing Fitz, and fighting alongside May, and I want the team to return to that misfit-family dynamic. But then I remember that his big brother shtick was just an act, that he's a cold-blooded murderer, and any redemption just seems impossible... and maybe that's the more interesting choice.

It's true that our culture of TV anti-heroes has conditioned us to love bad guys. Fans were rooting for Walter White long after he'd officially broken bad. People continue to be drawn to Don Draper and his extravagant lifestyle, even knowing what a terrible husband and father he is. It stands to reason that some viewers will continue to believe Ward is a good guy deep down, despite all evidence to the contrary. It would be fascinating to see the writers stick to their guns and keep Ward as a villain. A charismatic villain, to be sure — but a villain nonetheless.

Perhaps Ward will spend the remainder of the show locked in S.H.I.E.L.D.'s basement, dispensing advice and helping the team bring down bad guys like a handsome Hannibal Lecter. Maybe he'll even get the chance to sacrifice himself for the greater good. But the idea of Ward redeeming himself enough at this point to fully reintegrate himself into the team simply strains credulity a bit too far.