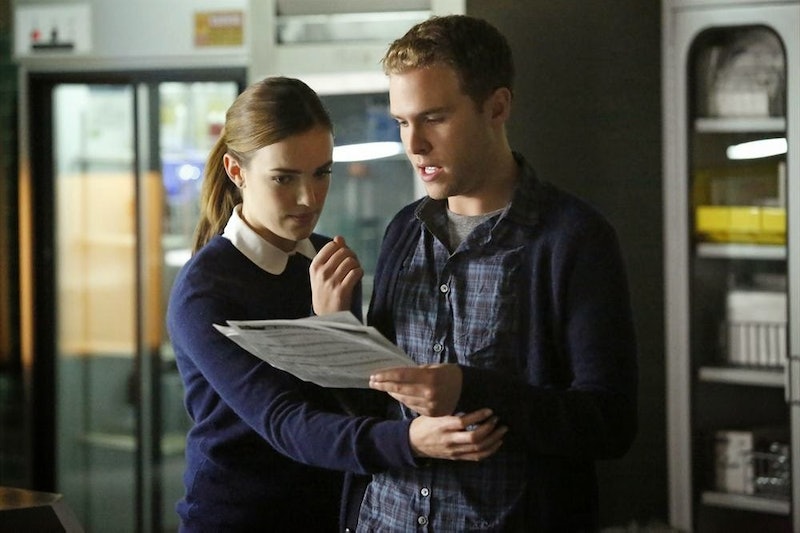 With the collapse of S.H.I.E.L.D. at the hands of the evil organization Hydra, we were prepared for a much darker Season 2 of ABC's Marvel's Agents Of S.H.I.E.L.D. — but perhaps not prepared enough for the massive bomb the show dropped on us at the end of the premiere episode, "Shadows." It turns out that, while both Agents Simmons and Fitz survived their trip to the bottom of the sea courtesy of turncoat Agent Ward, not both of them survived intact. Fitz may have suffered no lasting physical injury, but the trauma took a toll on his mind: it was revealed that Simmons actually left the team prior to the events of the premiere, and the "Simmons" Fitz was talking to was actually a figment of his imagination. But what happened to Fitz that caused this? And more importantly, can he recover?

Last week's big reveal left fans with even more questions. What does this twist mean for the future of the show? Is Simmons really gone for good? Will the character only exist in Fitz's damaged mind from here on out? What exactly is wrong with Fitz? Is the damage irreparable? As you'd expect from the show, none of these questions were answered. (Just add them to the list, along with: "What's the Obelisk?", and "Who's Skye's father?")

Here are a few possibilities on what's wrong with Fitz and what might happen to him.

The most logical explanation for Fitz's mental breakdown is that he's suffering from cerebral hypoxia, aka a lack of oxygen to the brain. Remember, when he and Simmons escaped from the pod, they only had enough oxygen for one of them — and he insisted she take it. Although Simmons dragged Fitz to the surface with her, there's a chance that the amount of time it took before he got air did severe damage to his brain. Symptoms of hypoxia include loss of motor skills, comas, and even brain death, none of which Fitz is suffering, thankfully. But it can also result in "cognitive, behavioral and personality changes" if the frontal lobe is damaged. This sounds more like what's happening to him.

If hypoxia really is the cause of Fitz's hallucinations, that's not a good thing. So far the only treatment for hypoxia is hypothermia therapy, and even that's only used on infants who are deprived of oxygen during birth — there's currently no known cure for adults. But surely Fitz won't be brain-damaged for the rest of the series, right? There must be a device in the S.H.I.E.L.D. universe capable of healing him. Perhaps that's what will bring Simmons back to the team: she's the only person smart enough to figure out a treatment plan for her former partner.

The hallucinations are a coping mechanism for his broken heart

Maybe the breakdown Fitz appears to be suffering isn't a result of physical brain damage, but is simply a coping mechanism for the massive trauma he underwent: he was betrayed by one of his closest friends and sent to his doom; he confessed his undying love to his partner; he barely survived the trip to the surface; and then, to cap it all off, the woman he loved left him. Coulson did mention in the premiere that Simmons leaving appeared to have "broken" Fitz. If his symptoms didn't start manifesting until after she ditched the team, perhaps it's all in his head — figuratively speaking, of course.

If this is the case, then the first step on the road to recovery for Fitz will be admitting he has a problem. His team will have to realize he's having hallucinations, and then make him realize Simmons isn't real. Only then will he be able to start healing himself. And it's quite possible that he'll decide the only way he'll ever be whole again is if he convinces Simmons to rejoin the team — so he'll set off on a quest to find her and bring her home.

Someone is hijacking his brain

I know, I know, it sounds crazy. But bear with me — what if Fitz's symptoms have nothing at all to do with his trip to the ocean floor? What if, while in recovery, an undercover Hydra agent managed to mess with Fitz's brain, and his hallucinations are merely a byproduct of a manipulated mind? Cybertek was able to communicate with Mike Peterson through his eyeball — surely it's not a stretch to imagine Hydra can communicate with people directly through their brains. If the benign-seeming Simmons hallucination starts talking Fitz into sabotaging the Playground and assassinating his fellow Agents, we'll definitely know something is up.

On a show like S.H.I.E.L.D., you can pretty much always bet that there's more going on than is immediately apparent. When asked a fairly straightforward question by TVLine about whether Fitz is suffering from brain damage due to his "underwater ordeal," actor Iain De Caestecker's response was surprisingly cagey: "I mean, I’m not totally sure what I can say. But yeah, he’s dealing with the after effects of what happened to him in Season 1. There are a lot of different things going on."

No matter what turns out to be wrong with Fitz, you can bet his road to recovery will be a long one full of twists and turns. We can only hope that he and Simmons come out on the other side a stronger team than ever.