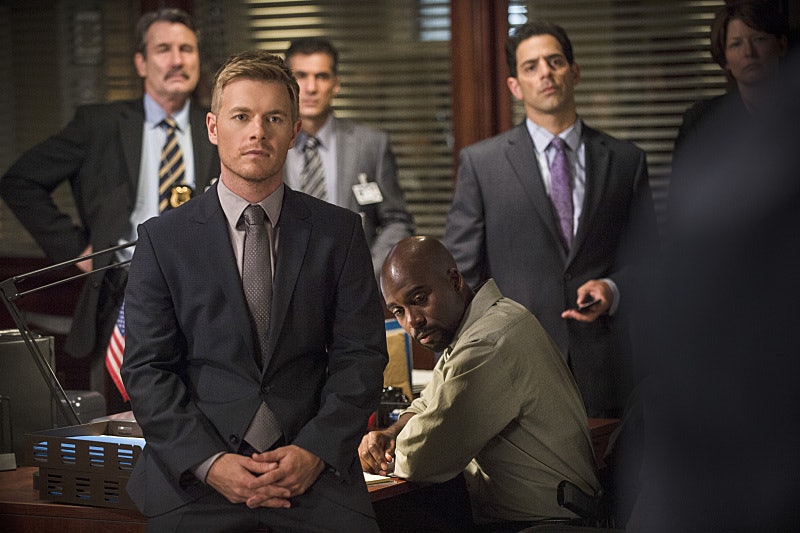 We've already been introduced to a lot of villainous and suspect characters on The Flash, but there's no Big Bad just yet. No overarching evil doer that everyone is either working for or fighting against. There was a big storm and a lot of folks became "meta humans" with special abilities, however, they don't seem to be organized just yet. This is a neat way to approach a superhero series, in my opinion. It reminds me a lot of the British comedy sci-fi series Misfits. Now, comic book fans will tell you that The Flash's archnemesis is Reverse-Flash. Clever. I'll stop snarking DC about the lack of naming originality when they stop pulling stunts like that. Reverse-Flash is also known as Professor Zoom and thirdly known as Eobard Thawne. However, we've already seen changes from the comics in premiere of the CW series. The identity of Reverse-Flash is up in the air, but set photos released by ComicBookMovie.com show that Reverse-Flash will appear on The Flash . The question is: who is behind that mask? So far, we have two candidates and it looks like we'll find out sooner rather than later.

My only qualm is this: would The Flash reveal such a huge character to the mythology this early on? It took a whole season for Black Canary to show up on Arrow in full costume. I'm worried that The Flash is going a little too fast — no pun intended. But before the show just outright tells us, here are the two most likely candidates for Reverse-Flash's alter ego.

He already shares a surname and more than enough syllables with Eobard Thawne, though "Eddie" is way less Game of Thrones-sounding. I approve of the name change, if that's what this is. The hotshot detective has already raised eyebrows and seduced Barry Allen's crush, Iris. To be fair, Barry was in a coma and they were never dating in the first place, so we can't really blame Eddie for pursuing a relationship. But still, I'm happy to hate him on behalf of the super-powered scientist. Especially if Thawne is evil from the start. Not cool!

If you squint, it kind of looks like actor Rick Cosnett under all that yellow fabric in the photo of Reverse-Flash above. It could, of course, also be a stunt double, or an actor whose casting is being kept under wraps. We simply don't know at this point.

I've said it before and I'll say it again: the doc is shady as Hell. In the final scene of the series premiere, a little yellow lighting appeared above Wells' (crystal ball) tablet that shows you the future. You half expected flying monkeys to come swarming through the ceiling. The yellow lighting is significant not only because it is Professor Zoom's signature shade, but because it was what Barry remembers most vividly from his mother's death. Red versus Yellow!

This certainly sets up an excellent mystery. Why would both of these characters be so clearly connected to Reverse-Flash, yet in different ways? We know that the Flash is often involved in time travel, and Wells' newspaper has proven that time will be a factor on the television show. I wonder if that has anything to do with it. If one thing's for sure, it's that there's a huge twist coming to The Flash.