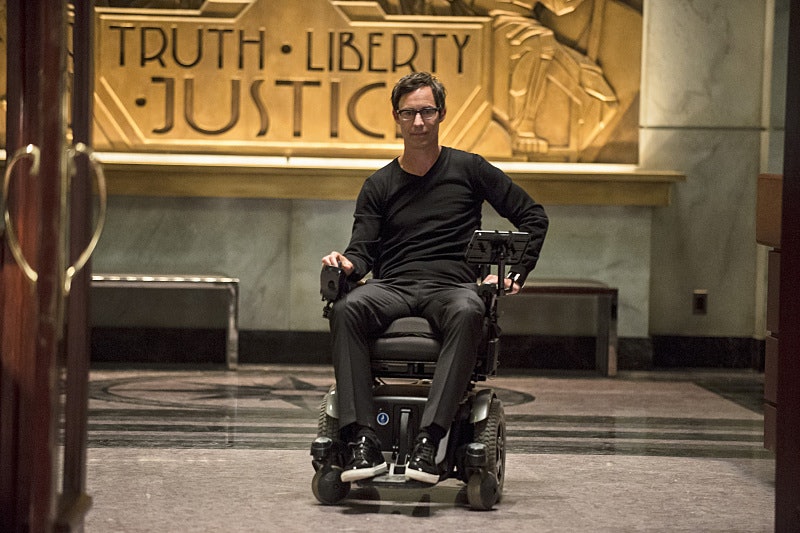 In the final scene of The Flash 's premiere episode, Doctor Harrison Wells took a turn from relatively decent to weird and potentially sinister. Played by actor Tom Cavenaugh, we found that deep in Wells' S.T.A.R. Labs lies a hidden chamber, covered in what looks like Braille — regular human English Braille. Inside, he stood up out of his wheelchair! What?! He then got on his super secret tablet device and appeared to access news stories from 2024. I want that app! One of the key elements of any Flash tale is time travel — looks like we've confirmed it's coming to the CW series. The newspaper headline showed Barry Allen on the front page of the newspaper (or whatever front pages will be called in 10 years) in costume as The Flash. Why is he so interested in Allen? He just told him that he wasn't special. There's clearly more to this character than meets the eye.

Harrison Wells appears to be an original character as far as DC Comics and the Flash universe goes. Curiouser and curiouser. I'm wondering if he has anything to do with the murder of Barry's mother — which in all versions involves time travel. Name recognition points to that "pretty boy" cop Eddie Thawne as the ultimate culprit who becomes Professor Zoom and Nora's killer. However, is it possible that the series is taking a different direction and that Doctor Wells is Professor Zoom instead? You can't do everything by the books. That would make an incredibly boring and predictable series. Just ask Game of Thrones fans about Lady Stoneheart.

What is this dude's deal? More importantly, why was he rude to my Barry Allen? Why would he tell him that he is "just" a guy struck by lightening when that's clearly not the case. Is it weird to be so protective over a character after only one episode of his own show? Well, I am.