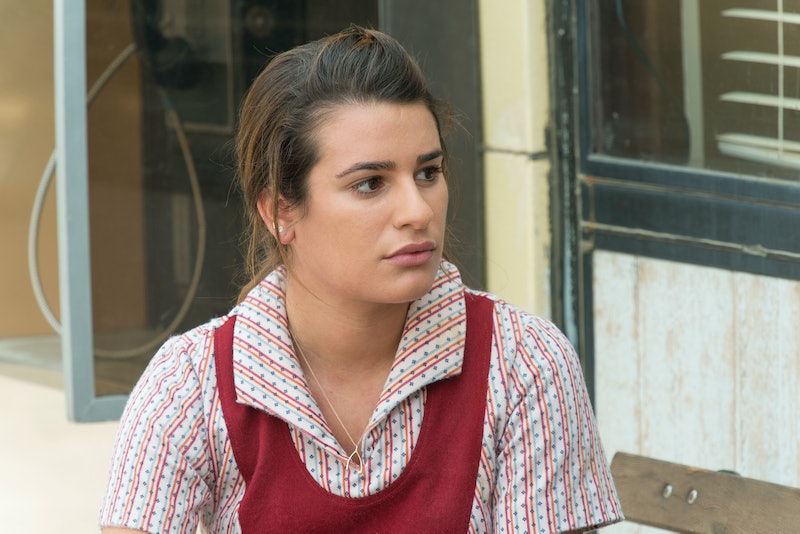 Can a Glee actress go from playing a gold-star obsessed Streisand aficionado in dorky sweaters and knee high socks to something completely different? Not entirely, apparently. Sure, she's since upgraded from her choir dork look on the Fox dramedy, but Lea Michele guest starred on Sons of Anarchy and she was still three parts Rachel Berry, Lima Loser For Life.

Of course, in Michele's defense, she was also one hefty part pretty good actress in a rather intense scene. Michele shows up as Gertie, a young truck stop waitress with a son and a bad relationship behind her. She helps Gemma, who was forced to walk "12 miles in spiked heels" after Juice decided not to kill her after all. After Gemma understandably falls asleep on the diner table, Gertie invites her outside for a smoke and they get to talking.

The scene isn't really about Michele's Gertie as much as it is the reflection of Gemma that we see on Gertie's pure, young face. Michele's character is sweet, innocent, and kind. She assumes the best of Gemma, not knowing that rather recently, this woman stuck a grill fork in her daughter-in-law's skull and tried to take a young man out into the wilderness to whack him. Gemma gets a little something off her chest, admitting that Tara's death was "my fault," but obviously not confessing to the full-on murder. Gemma notes that she sees Gertie must be "a good girl," and it seems that Gemma's pointing it out as a way of reminding herself just how good she isn't.

It's a quick scene and Michele isn't required to do all that much. It almost makes you wonder why Kurt Sutter brought the big name actress in, but while Michele clearly brings along her chipper Glee routine to play Gertie, she also brings a sense of gravity that I didn't think we've seen from her outside of really, really big ballads. Michele was actually unexpectedly good.

And while I was a little disappointed that she wasn't a little more rough around the edges, as the leaked images of her filming the scene suggested, I have to admit hers is a darn good scene.