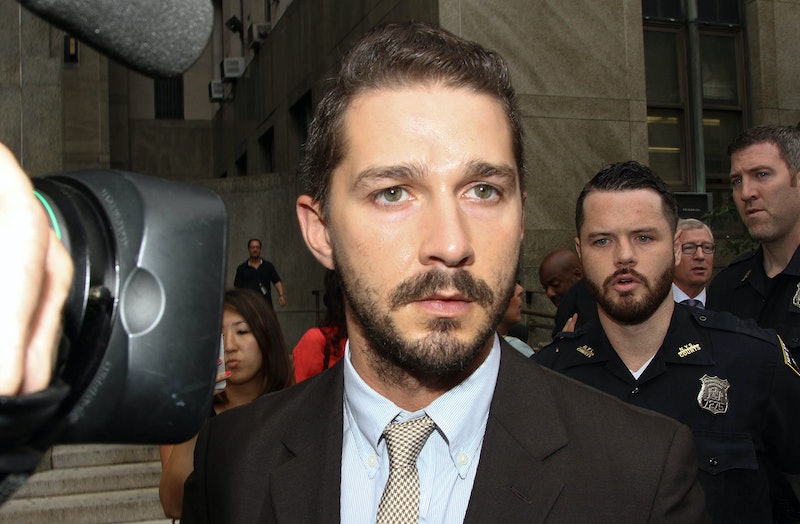 Shia LaBeouf's promotional tour for Fury seems to be doubling as an apology tour for the troubled actor. Now that he's finally doing interviews about the film, it seems that he's decided to incorporate his personal struggles into those interviews in a way that's very admirable. LaBeouf knows that people are talking about him and, instead of ignoring what they're saying or letting it distract from the film, he's taking the opportunity to air his side of the story so that people can stop wondering and focus on what's important. On his Monday night appearance on Jimmy Kimmel Live, LaBeouf told the story of his arrest and, apparently, we have the World Cup to blame for that one.

As we all know, LaBeouf was arrested in June for disorderly conduct and drunken misbehavior during and after a showing of Cabaret in New York City. According to him, the explanation for all of his bizarre behavior was very simple: He was completely, absolutely, 100 percent wasted. LaBeouf had been watching the World Cup at a bar during the day when he began drinking, which eventually turned into a conversation with a homeless man. When the homeless man got scared by something and ran, LaBeouf alleges he ran after the man to calm him down before returning to the bar to pay his bill. There, he ran into a fan who happened to be a dancer in Cabaret that invited him to come and watch the show. And we all remember what happened after that.

Over the course of his seven-minute-long story, LaBeouf didn't tell us anything that we didn't piece together ourselves from media reports and anonymous sources. The important thing is that he's telling the story in his own words. He doesn't excuse his actions in the slightest; he simply explains the drunken mind-set he was in when all of this was going on. However, it's interesting to note that LaBeouf does underplay the entire event. He makes it sound more like a silly drunken party story — ah, the World Cup, how it makes fools of us all — than the terrifyingly bizarre event it seemed to be at the time. Should this be enough for all of us to let it go?

By the end of the story, which was admittedly hilarious, both Kimmel and LaBeouf agreed that he would be dialing back a lot from now on because he'd learned his lesson from that whole mess. "I'm going to stay away from Broadway for a little bit," said LaBeouf at the end of his long tale, though he couldn't resist adding a joke. "I'm [staying away from whiskey] and Allen Iverson and leather pants."

Check out the story below.