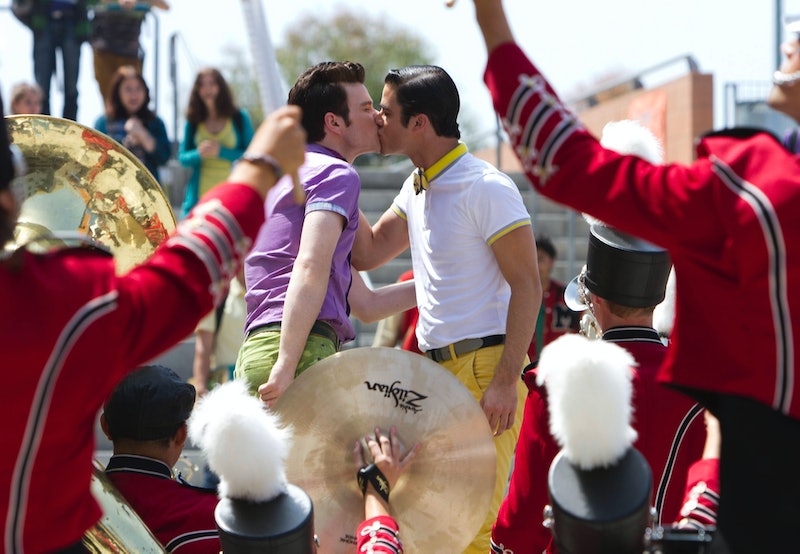 Glee's final season is slowly making its way toward us and tensions are high in the Glee fandom. After all, the spoilers go from being promising news, like the fact that Dianna Agron and Mark Salling are returning for Season 6, to being horrifying news, like the fact that Blaine Anderson and Dave Karofsky are an item in Season 6. Oh, Glee, how you mess with the heartstrings of those of us who have managed to hang on through your ridiculous storylines. However, this latest Season 6 spoiler has the potential to either be very, very good or very, very bad depending on who it's about. According to E! Online, Glee Season 6 will feature an engagement between two characters early on in the season. Wait, what?

Season 6 takes place after a time skip that has many familiar faces and more than a couple of new ones returning to Lima, Ohio and McKinley High for a last hurrah. While my one true pairing, Kurt Hummel and Blaine Anderson, might have broken up, we'll see the return of Brittany Pierce and Santana Lopez as well as Quinn Fabray and Noah Puckerman to Lima. Could any of these couples be the ones getting ready to tie the knot? Let's examine the likelihood of each of these Glee engagements.

On the one hand, both Brittany and Santana are confirmed to be returning for Season 6 and no spoilers have revealed that they broke up at any point during the time skip. On the other hand, Santana's reduced role in the sixth season might mean that any engagement featuring them would get reduced screen time and thus not qualify as major.

Both Puck and Quinn are confirmed to be returning for Glee's final season and the likelihood of them being the ones to be getting engaged is incredibly high. In the first place, they already have a kid together, so they did this whole thing backwards. In the second place, they were both at a place in their lives when they got together that made their rekindled relationship seem more mature than everyone else's. In the third place, we haven't seen much of either of them since, so they've had plenty of time to date before dropping the proposal bomb.

Let's be honest with ourselves here. Blaine Anderson is in love with the idea of love. He serenaded a boy at his place of work, for Pete's sake. And he got engaged to Kurt practically as an apology for cheating on him and then being apart from him for a whole season. It's pretty likely that Blaine would rush to the altar with Karofsky as well. Or, worse, Karofsky is the one to propose to him because Blaine is the steadiest influence in his life... but Blaine is secretly still hung up on Kurt.

Kitty might be returning for Glee's Season 6, but she and Artie broke up and they should really stay that way. Theirs didn't seem like a love that would conquer all to me. Let's just cut that out right now.

Sam might be returning for a surprising role in Glee's Season 6, but there's no guarantee on how often he or Mercedes will appear in the season's plot. That makes the likelihood that they're the ones getting engaged pretty low, especially since they broke up the last time we saw them.

Rachel and a New Character

Glee is basically The Rachel Berry Show and we all know that by now. Rachel might be a Lima Loser in Season 6, but that doesn't mean other aspects of her life might not have improved during the time skip. She took Finn Hudson's death very hard, but she might have healed and moved on during the time skip just as Lea Michele has in real life. Plus, being engaged in Season 6 would help her mirror Mr. Shuester's role on the show even more.

Even I know that this is just wishful thinking on my part. If Blaine and Karofsky are together in Season 6 after Blaine and Kurt broke up, then there's no way that the Glee writers are going to make Blaine and Karofsky's relationship last as long as it takes them to break up in one episode. And, if they do, there's no way Kurt and Blaine are going to get re-engaged in the early episodes of the season when they have that fall out to deal with. We might have to wait a long time for our Klaine reunion.