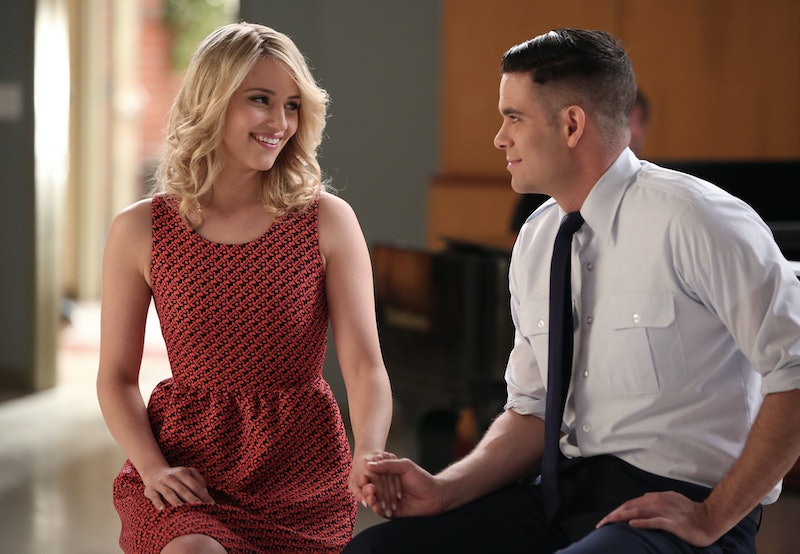 Here we go again, Gleeks. Glee Season 6 is still months away, but the potentially disappointing news keeps pouring in. OK, to be fair, there's been some pretty great news also, but, coming from someone who's stuck by Glee for this long, the bad is starting to outweigh the good at this point. I mean, Karofsky and Blaine will get together in Season 6 for crying out loud. Glee's new season will be the series' last hurrah, but it doesn't seem like Ryan Murphy and Brad Falchuk have learned much over the past five seasons. Glee Season 6 will have another engagement, which is just terrible news because, while I want the McKinley students to live happily ever after, this show has a horrendous track record with marriage.

Now, I more than understand Glee's intention to tie up its loose ends and leave its characters on tracks to bright, romantic futures. I'd love nothing more than for Rachel & Co. to ride off into the sunset with careers and love. But an engagement — again? Really, Ryan Murphy? That just seems like a little much and it absolutely makes me question whether or not the series has learned anything over the past five seasons. Glee's done this twice before and, apparently, both times failed now that Gleeks have learned that our beloved Klaine will be no more when Season 6 premieres. So, what gives? Is FOX going for the old "third time's the charm" approach?

The thing about a Glee engagement and possibly why the series' two prior attempts at marriage have failed, is that the McKinley kids are just that, kids. They're still trying to figure out who they are and what they want with their lives and, in most of their cases in Season 6, how to find a new dream when your first one crumbles beneath you. And, in case anyone's forgotten, Rachel and the rest of the New Directions are still in college in Glee-time. Now, I'm not saying that college kids shouldn't get engaged if they love each other and feel ready for marriage, but NONE and I mean NONE of the Glee kids have been described as evolving past the characters they were introduced as back in 2009.

Rachel's still the same girl that never made it to City Hall with Finn to tie the knot before she went to NYADA and Kurt and Blaine are, apparently, still the same couple they've always been — when the going gets tough, they can't hack it. And with both of these couples, Glee forced the engagements upon them out of desperation for the couples to prove how committed they were to one another. Which really isn't a good reason to marry someone — because you're afraid they'll never trust you again because you cheated (I'm looking at you, Blaine) or you're afraid that they'll move on with their lives and you'll no longer be a part of it.

We also need to take into account the fact that Glee's shortened sixth season doesn't really lend the series enough time to convince anyone that one of its couples should be getting engaged. (Unless it's Quinn and Puck.) As far as where Season 5 left off, most of the show's characters were on the outs with their significant others. A 13-episode season, with the engagement happening early, is hardly enough time to make the engagement not seem like a totally desperate move on the proposing party's part.

And, honestly, so help me and all of the fans out there if this is Glee's way of teasing that, against all odds (cheating, jealousy, etc.), Kurt and Blaine will get back together and get engaged again. Because that would just be ridiculous and really make me hate myself for sticking by Glee for this long. Stop repeating the same mistakes over and over again, Ryan Murphy, it's repetitive and it's boring as hell.