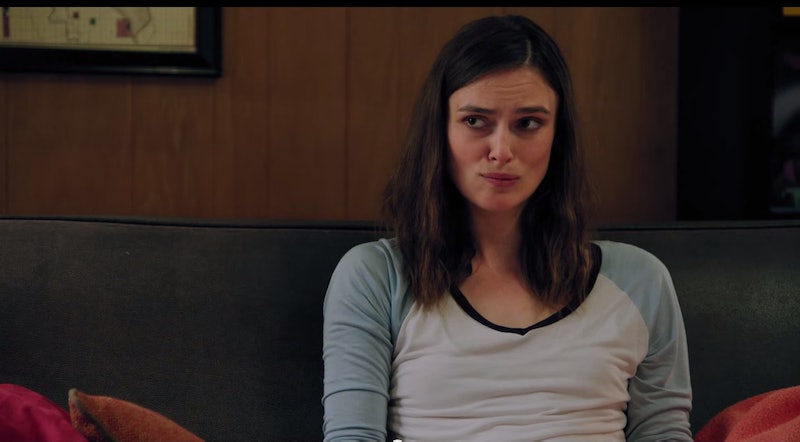 So far, millennials have gotten a pretty bad rap. We're known for standing in hour-long lines for cupcakes, wanting to start work after 10 a.m., and being as obsessed with social media as we are ourselves. Attempts to portray this in pop culture range from the sugary (ABC's questionable new series Selfie ) to stuff that gets a little darker (the upcoming Jason Reitman film Men, Women & Children), but few millennial characters have felt as real and relatable as Megan in indie director Lynn Shelton's latest movie, Laggies, starring Keira Knightley, Sam Rockwell, and Chloë Grace Moretz.

Knightley plays 28-year-old Megan, an overeducated and virtually unemployed woman who relies heavily on the enabling support she gets from her parents and high school sweetheart, Anthony, in order to keep her life from moving forward. She lags behind her type-A, Queen Bee friends who check off traditional milestones like getting married and popping out kids, all of which she watches with a general sense of (sometimes hilarious) apathy, and finds herself in a rut that so many people in their twenties will recognize as their own. It's a coming-of-age story way after you're supposed to have come of age, and for once it's a woman doing the growing up.

Megan is an unmotivated slacker, and while her self-sabotage makes her annoying at times, I feel like a little piece of her lives in most millennials in one way or another. Screenwriter Andrea Seigel gives us a nice change of pace in Megan who, as flawed as she is, is one of the most relatable female characters to appear in a movie in a long time. She's a refreshing character in a landscape filled with women who are all-consumed with "getting the guy," or "leaning in," and unapologetically real, even when her mistakes and missteps verge on cringeworthy.

She doesn't take much (well... anything, really) seriously

In one of the funniest scenes of the movie, Megan goes to a mini-bachelorette party for soon-to-be-wed pal Allison (played by a #flawless Ellie Kemper), the HBIC of their friend group. Over the course of the get together, it's clear that Megan's brand of humor clashes with her uptight friends' in a major way, especially type-A Allison, who at one point gets furious with Megan for tweaking the nipples on a giant, gold Buddha statue ("That's Buddha!").

Her career is up in the air

I really, really wish that finding a job straight out of college for the exact thing you went to school for was as easy as they make it seem in the movies (in which case I'd be a best selling author by now — PEACE, PEASANTS), but Laggies acknowledges the fact that a lot of people who are in their twenties right now currently reside or work with their parents. In Megan's case it's because she's too lazy to actually get up and look for a real job that she actually might enjoy because that would mean actually changing her life. It takes doing something absolutely crazy for her to finally get the motivation and wake-up call she needs.

Instead of facing her problems head-on, she runs

After meeting 16-year-old Annika (a sensitive and perfect Chloë Grace Moretz), she decides to "lay low" at her house, along with Annika's dad Craig (Sam Rockwell) to escape the pressure of her boyfriend's proposal and her life being in a general standstill. Who hasn't wanted to do that from time to time? The traditional route of graduating from college, getting a job, getting married, and raising kids seems to almost scare Megan, and getting away from it all is the only option she can see. There's no clean, easy way to wrap up the problems in her life, or anyone's life for that matter, and Laggies does a fantastic job of depicting that without making Megan seem utterly pathetic or totally unlikable. She's getting there, it's just taking her a little longer than most people. Who can't relate to that?

Check out Laggies for yourself when it hits theaters Oct. 24. And hey, cut Megan some slack, OK?