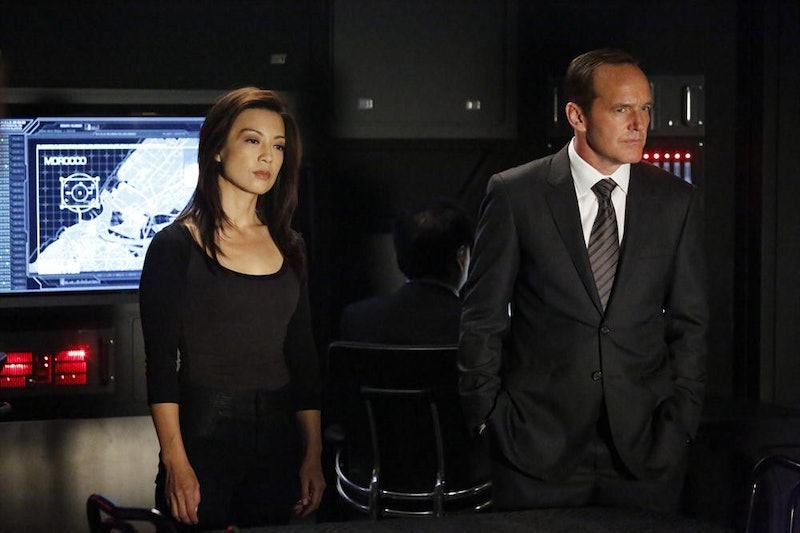 Tuesday night's new episode of Agents of S.H.I.E.L.D had Agent Melinda May facing some of her biggest fears: smiling, dancing, and wearing heels. And on top of all that, she also had to create a contingency plan in case Coulson goes crazy... you know, Agent Garrett crazy. Agent Coulson asked Melinda May to do the one thing she never thought she'd have to do: kill him. But he only informed the fake Melinda May of the other part of his plan — that May would take over as Director of S.H.I.E.L.D. if ever Coulson should have a real breakdown.

Hopefully, that day will never come. Right now, Agent Coulson is some of the only glue holding S.H.I.E.L.D. (both the organization and the show) together. But the show isn't going resolutely in either direction yet. Sure, it's likely that the team would find a last-minute save for whatever is plaguing Coulson, but it's also unlikely that the show would just allow this information to sit there and not do anything with it.

But at least we know that if Coulson is ever forced to leave S.H.I.E.L.D., the organization will be in good hands. After all, Melinda May is nothing if not fiercely loyal, and she'll do whatever it takes to keep S.H.I.E.L.D. together. Unfortunately, May isn't exactly the the most friendly person, so maybe she should keep working on her socializing skills, then? At the very least to make people less scared of her laugh...