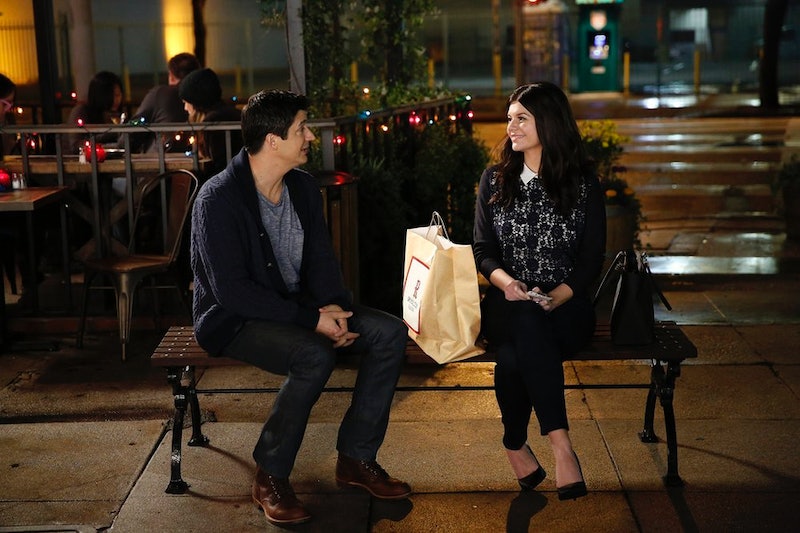 On top of being a laugh riot, David Caspe’s Happy Endings was a veritable locomotive of progressive ideas. The canceled-too-soon sitcom subverted the genre tropes tied to leading men, leading women, men and women in general, black people, gay people, and relationships of all kinds. So we’re not quite sure where Caspe went wrong with his new series Marry Me, which bursts out the gate with a particularly regressive role for Casey Wilson (sorry, that's Gone Girl star Casey Wilson).

Wilson was dynamite on Happy Endings, and shows the same comic energy in the pilot of her new endeavor. But the material with which Wilson is working here seems like it was ripped from an open mic routine circa 1991. After Wilson’s character Annie comes to the conclusion that her longtime boyfriend Jake (Ken Marino, whose character issues we’ll address as well) is not going to cap their romantic getaway with a proposal, she goes berserk, unleashing a wave of cruel hysterics unto him and all their secretly-within-earshot friends and family members.

But worse than any of this, Annie resorts to proclamations about “every girl want[ing] to get married,” and requests of Jake to “free me while I still have an egg.” (This coming from a woman in her very early 30s.)

The problem is not that that Annie’s qualms are unsympathetic, but that they—the aching desperation to get married and have babies, and the hostile mania that charges her acknowledgment of delays in that plan—are outdated, stereotypical, and just plain lazy. The first, and pretty much only, thing we learn about Wilson’s character in the pilot of Marry Me is that she craves commitment (and attention) and will throw a fit in the absence of either.

It’s the sort of malignant female archetype that lined the lesser sitcoms of the ‘80s and ‘90s—not quite a step up from the subordinate wives of decades prior if you consider the vitriol with which these Gen X ladies seem to have been written. And here we are, 20 years past the expiration date of this tired trope, seeing it unfurl once more.

And from the writer who brought us the terribly clever and modern Happy Endings, no less. Although not as much of a step backward as Wilson’s Annie, Marino’s Jake also feels like a tribute to masculinity from another time. The comedian dials down the hyper-macho act usually reserved for his villainous roles, but not quite enough to render Jake all that likable…or even, in certain instances, non-predatory.

Thinking back to Happy Endings’ lackluster pilot allows for hope. At the dawn of the series, Zachary Knighton’s Dave and Elisha Cuthbert’s Alex bore hardly any trace of the stock character and gender deconstructions they’d come to embody so gallantly. So maybe Marry Me won’t be quite the retread that it seems, but a send-up thereof, evolving from one end of the spectrum to the other over time. Keeping this in mind, we can give Annie and Jake the benefit of the doubt. We’ve got two strong comic forces occupying the lead characters, now all we need are strong characters for them to occupy.