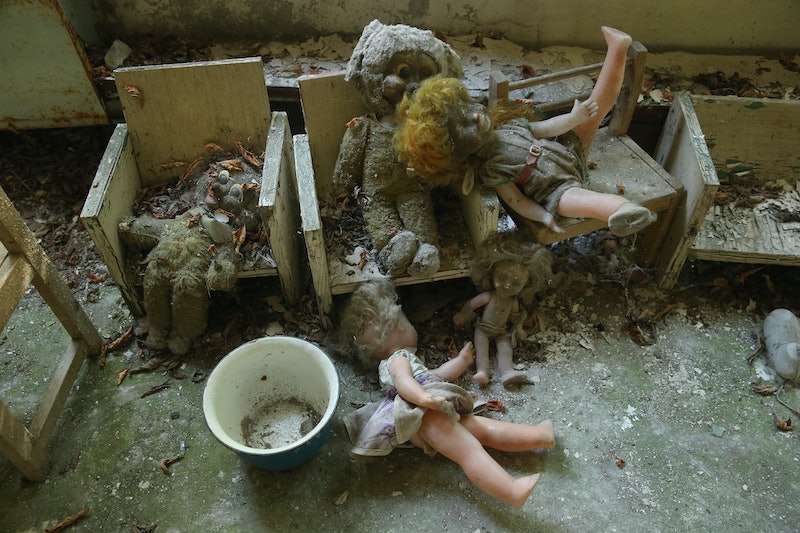 Today in Ideas I Wish I’d Had, But Dash It All, Someone Beat Me To It: People Magazine — yes, that People — published a Halloween feature this week showcasing the best ghost stories from every state in the U.S. They’ve even created a map with a neat little pictorial representation of each story in its appropriate location, and yes, it’s awesome.

I love ghost stories. I spent a huge portion of my childhood lurking on the section of the rickety balcony in my public library that housed the “true paranormal experiences” stories; maybe that’s why I grew up to have a few odd, related hobbies as an adult. It’s also probably why I was so taken with People’s list, which definitely includes a few I didn’t know before. And that? Is pretty impressive. I know a lot of ghost stories.

You can check out all 50 of them over at People , but in the meantime, here are five of the tales I found the most interesting. People’s versions are a little more TL;DR-ish than mine — I thought the details were too cool to pass up — so if you like ‘em short and shivery, head on over to the source. Ready? Let’s hunt some ghosts!

1. California: The Haunting of the Hotel Del Coronado

Not going to lie: I’m actually surprised that California’s most iconic ghost story didn’t go to the Winchester Mystery House, the Queen Mary, or the Roosevelt Hotel. The history of the Hotel Del Coronado in San Diego was actually new to me, though, so points for that. According to Weird U.S., the ghost haunting the hotel belongs to a woman named Kate Morgan, who checked into the hotel on Thanksgiving Day in 1892. A con artist, she typically worked with her husband, Tom; her job was to flirt and distract their unsuspecting marks while he swindled them with card tricks like Three Card Monte. They split up eventually, though — she may have decided she was ready for a divorce — and Kate continued to travel on her own.

She checked into the hotel under the name Lottie A. Bernard… and five days later, after a bunch of somewhat suspicious activity, she was found dead on the stairs leading to the beach. A gun lay at her side and a bullet hole shot through her right temple. She apparently decided to stick around, though; she’s regularly reported causing mischief in Room 302, the room she stayed in during her final days.

Apparently there haven’t actually been any ghost sightings here, but the ruins of Gandini’s Circus in Edmond, OK has been drawing curious visitors for ages. Even if it’s not haunted by ghosts, though, it’s probably haunted by history — the past has a tendency to cling to abandoned places.

Abandoned Oklahoma notes that Gandini’s first came to town in the early decades of the 20th century. There’s not much information available about it otherwise, but the charred remains suggest that it may have burned down. Drive far enough down Kelly Road and you’ll find it. Let us know what you see.

A lot of stories cling to the winding, nine-mile stretch called Clinton Road in West Milford, NJ. Weird NJ has a good, long entry on them all, but it comes down mostly to three different stories: The “Ghost Boy Bridge” over the creek at the treacherous area known as Dead Man’s Curve, the “Druidic Temple,” and the “Satanic” activity that used to take place at the ruins of Cross Castle. Ghost Boy Bridge allegedly plays host to the ghost of a boy who died after being hit by an out-of-control car coming round the bend; if you flick a coin in the creek at night, he’ll toss it back at you. The “Druidic Temple” is actually the old iron forge — neither Druidic nor a temple, it’s still pretty neat. Cross Castle doesn’t exist anymore, but rumor has it that after Richard J. Cross, who built the place, died, it became a hotbed of Satanic activity. It’s unlikely that there was actually much of that going on there — the stories popped up during the ‘80s, at which point the U.S. was embroiled in a “Satanic panic” of sorts — but the ruins must have been something to see when they were still around.

The one story we know about the place that’s actually real? Richard Kuklinski, the hitman/serial killer known as The Iceman, was caught when one of his victims was found in the woods in 1983. Freaky.

I actually visited Clinton Road about a week and a half ago as part of a mini-haunted road trip I took with one of my best friends from college; that's a photo from the trip up there. We didn’t find any ghosts, but it was still a pretty wild ride — both literally and figuratively. After we almost got creamed by a car speeding from the other direction around Dead Man’s Curve… well, let’s just say it’s not a place I’d want to drive down at night.

Things I did not know until today include the fact that A) there is a Greyhound Bus Museum, and B) it’s located on top of an old quarantine camp. During 1918, those who contracted yellow fever were packed into the camp — which, by the way, we presume was located where it was due to its close proximity to the Hibbing Park Cemetery. Lots of sick people, unhappy people, and dead people, all jammed into one space? It’s a recipe for a haunting.

According to Before It’s News, tools will regularly go missing from the premises and show up elsewhere, stacked in an orderly fashion, sometime later; strange noises and mysterious shadows are a regular occurrence; and the apparition of little girl between the ages of eight and 10 is often seen in the wee hours of the morning. I wonder who she is — and whether she ever made it out of the camp.

We don’t know much about this one, but as legend has it, a ghost dog roams the shores of Loon Pond in Acton, Maine. He’s a husky, so I would imagine he’s an absolutely beautiful pup — except for the fact that he kind of glows in the dark in a way that dogs usually don’t. Most notably, he’s missing his fourth leg. He tends to appear around midnight, although why he’s still hanging around the pond is anyone’s guess. Maybe that’s where he lost his leg. Sad. I hope he finds it one day.